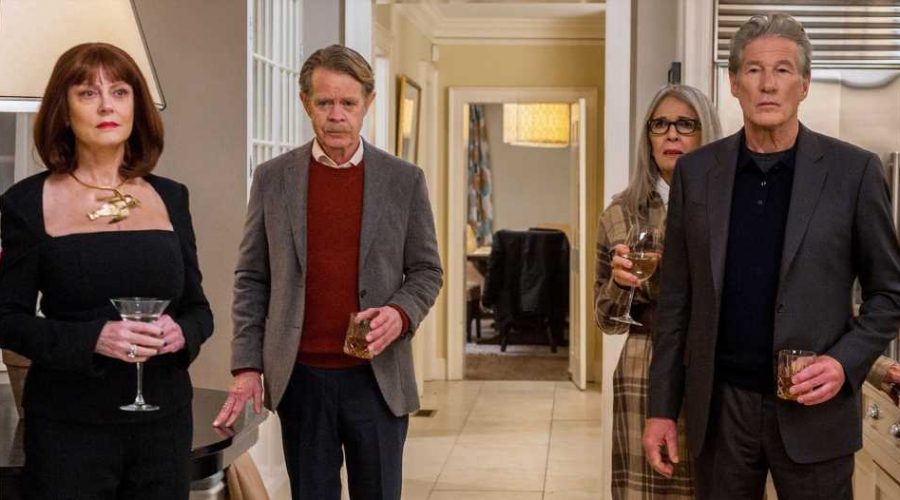 It’s hard to grasp just how star-studded Michael Jacobs‘ new romantic comedy Maybe I Do actually is — that even lead William H. Macy is pinching himself.

“It was something to work with these people. They’re all iconic and I can’t say I grew up with them. We grew up together. We’re almost, as a matter of fact, I’m probably older than anybody, but to have seen them in so many magnificent films,” Macy, 72, exclusively told Us Weekly. 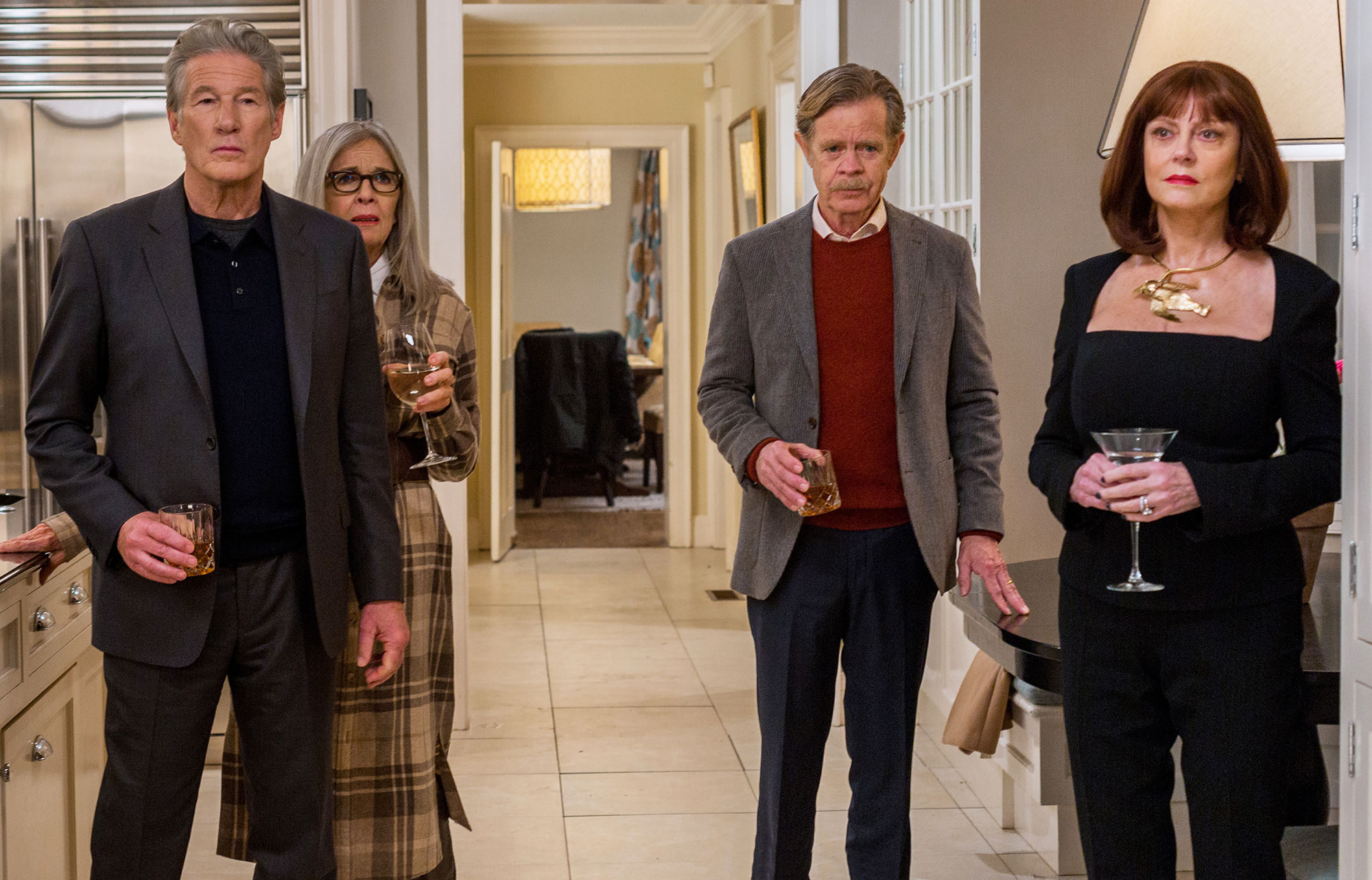 The Shameless alum, 72, is in fact younger than his ensemble counterparts, Diane Keaton, Susan Sarandon and Richard Gere. Emma Roberts and Luke Bracey round out the film, which centers on the couple Michelle (Roberts) and Allen (Bracey) inviting both of their parents to dinner to finally meet. As if their decision to marry isn’t rough enough, the evening kicks off on a more awkward note when it’s revealed that the two sets of parents — Grace (Keaton, 77) and Howard (Gere, 73) along with Monica (Sarandon, 76) and Sam (Macy) — already know each other from past infidelities.

“When I worked with Diane the first day, I just, I couldn’t help myself,” the Fargo actor told Us. “I referenced that scene in Reds where she’s waiting for Warren Beatty to get off the train, and he’s not getting off the train, and it just passes over her face that he’s dead, he’s not going to make it. And then she looks up again, and there he is looking like Warren getting off the train. And the look she had on her face just slew me. It slew me when I saw it in the movie theater, I was blubbering like a baby. I fell so in love with her. … What a moment. We had a lot of moments like that.”

Macy’s Sam, for his part, went on an impromptu date with Grace while his wife, Monica, has been having a months-long affair with Howard in Maybe I Do. And he was just as smitten with his onscreen wife. 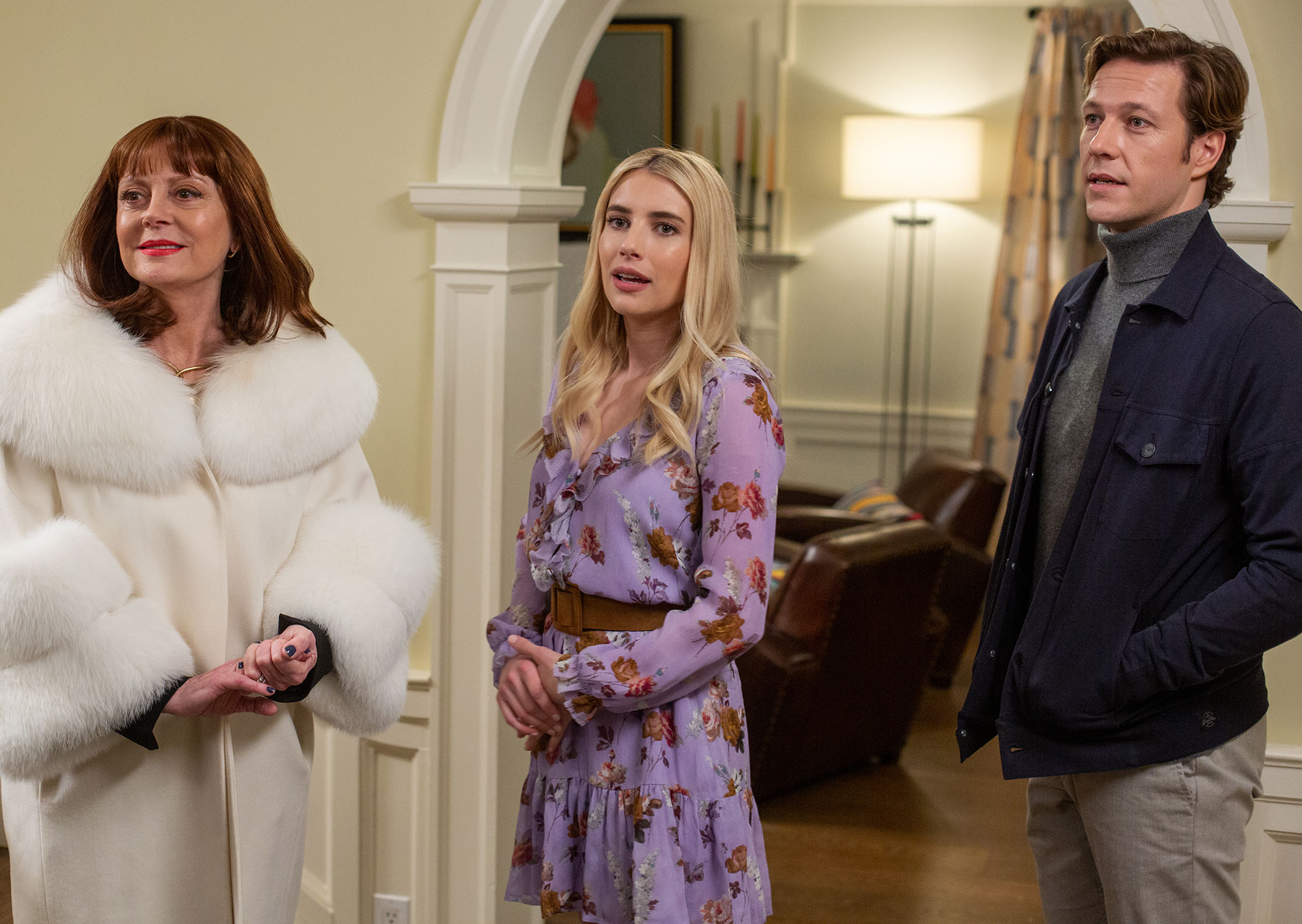 “With Susan, every once in a while, I would go, ‘Oh my God, you were also in my favorite movies,’” he recalled, laughing. “Susan has been in all of them. It’s annoying, really, man. She’s got the best batting average of any actor in this business. She just seems to pick the best scripts. And to continue the baseball analogy, she knocks it out of the ballpark every single time. I just adore her. And what a pistol she is.”

The Emmy winner gushed that Sarandon “will go anywhere and do anything” in a role, and the pair “spoke candidly” about the “affection” their characters Sam and Monica still had for one another despite navigating their loveless marriage.

“I think Michael heard us talking about it, and he put in a moment at the end where it’s a little ambiguous, that we’re gonna miss each other a little bit,” Macy said of the final scene between the two. “But it’s one of the situations where whatever brought you together has gone away. We’ve grown in different directions and like so many couples, it’s become guerrilla warfare to see who can wound the other person the most. And it’s just dreadful. And I think what the movie’s about is bringing that to the light, talking about it and having the courage to split up.” 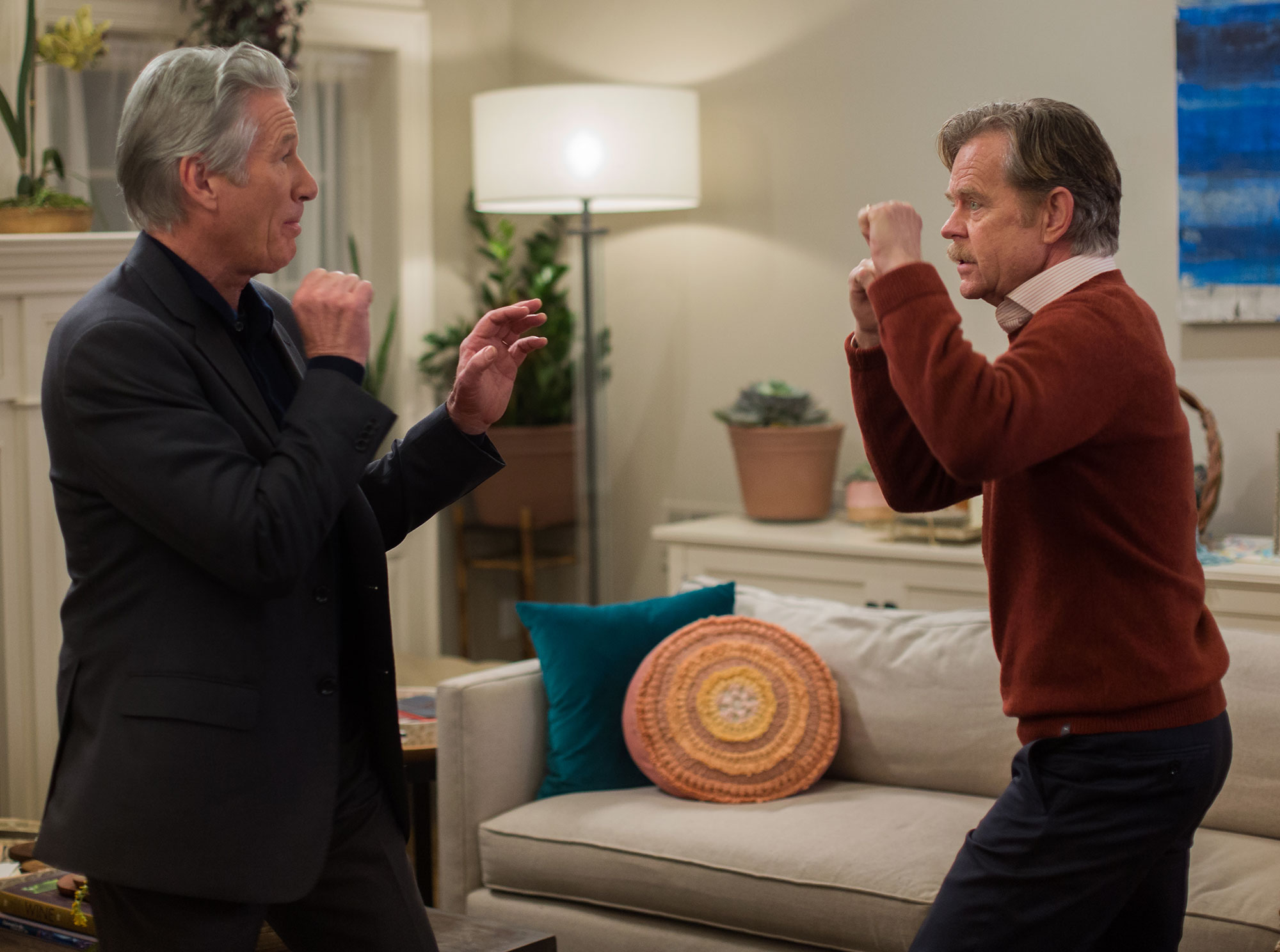 Leaning into the physical comedy with Gere was a highlight for the Oscar nominee too. Although somber about his relationship status, Sam’s desire to pick a fight with Howard at one point brings in some much-needed comedic relief.

“We sort of improvised the blocking of it a little bit. About the second rehearsal, I tapped him on the chin. I got through and I tapped him,” Macy explained to Us. “He’s got a line there where he says, ‘Sam, if someone like you can’t find happiness, then what hope? Your hope is there, because you’re the nicest guy in the world.’ And the way he delivered the line … what he was saying was, ‘You’re such a jerk, Sam.’ And after the take, I looked at him and I said, ‘You kind of call me a jerk in that last one.’ He said, ‘I did, didn’t I?’ That’s the kind of actors that we had on this film. … It was quite a cast.”

For Macy, the “really wonderful” scene that he’ll take with him is when the entire cast shot the climactic scene in the living room. 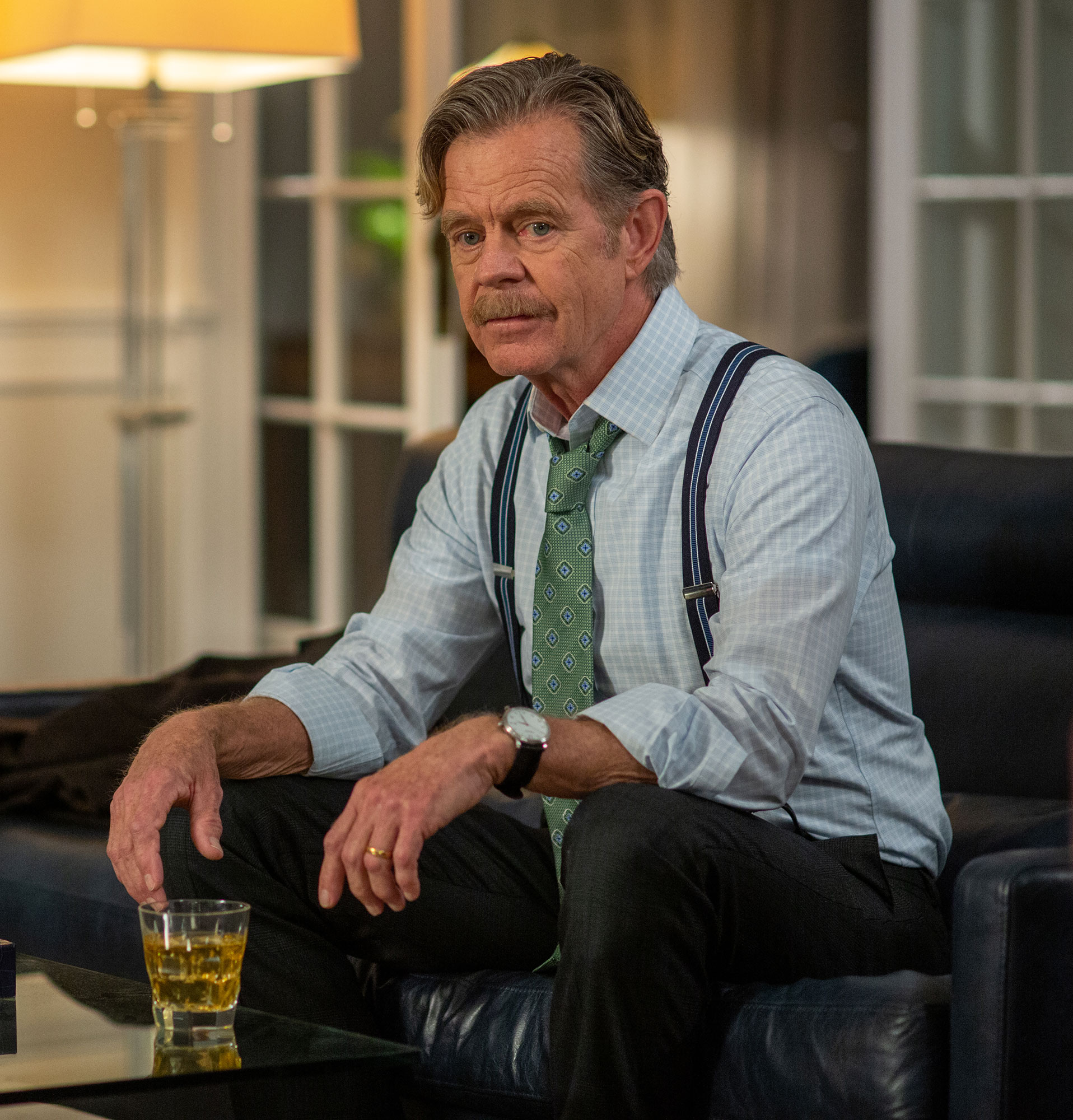 “There’s a preamble to the scene where I say, ‘Go after her.’ It all comes out of who’s been shipping whom, and we say, should we do a fight? We shot all of that in that room in one day, and I would say it was that day,” he told Us. “We all got to be together. And they’re funny scenes and wordy scenes, and a lot happens. And I would say it was that scene Diane kept getting confused about her exit point in that film. And at one point, you know, we’d done a couple, right? And then she was bound and determined to leave on this earlier line, and I saw Richard just sort of reach out and grab her and sit her back down on the couch.”

Maybe I Do is set to hit theaters on Friday, January 27.