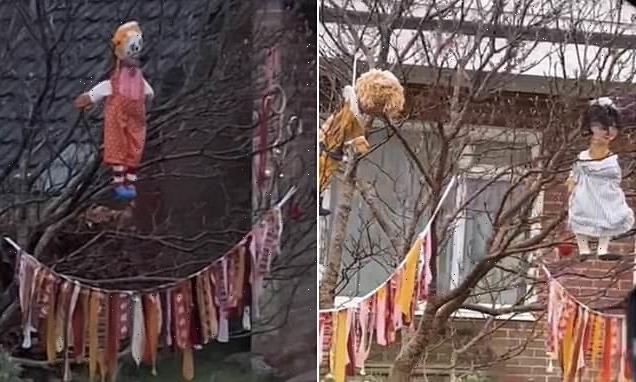 A British mother has revealed her horror after her neighbour decorated her front garden with a collection of unusual children’s dolls.

The unnamed woman, from Hampshire, took to parenting forum Mumsnet to explain that her children were ‘creeped out’ by the dolls which her neighbours were putting up in their garden.

The mother explained how the dolls looked as though they were home made, adding she was wondering about the story and if there is a pagan or any other traditional reasoning behind their existence.

Other Mumsnet users were baffled by the decor, with some joking it could be for ‘voodoo’. 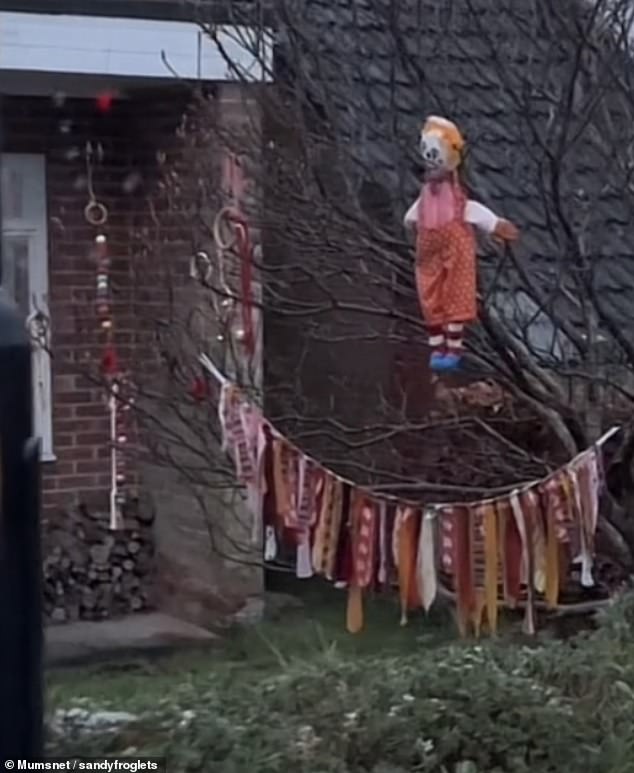 An unnamed woman, from Hampshire, revealed on the parenting forum Mumsnet that her children were ‘creeped out’ by the dolls her neighbours were putting up in their garden

The mother explained the neighbours kept adding more dolls to their garden, and that it was ‘really creeping [her] children out.’

Sharing a post titled ‘Weird dolls hanging on neighbours tree?’, she said: ‘Unsure what this is for but they keep adding more rag dolls to their tree in their front garden.

‘They are hanging with other objects like wooden rings and ribbons. Is it some kind of pagan thing? No idea but it’s b***** weird…

‘Am I being unreasonable to ask them what it’s for!? We live in a quiet little part outside of a city. 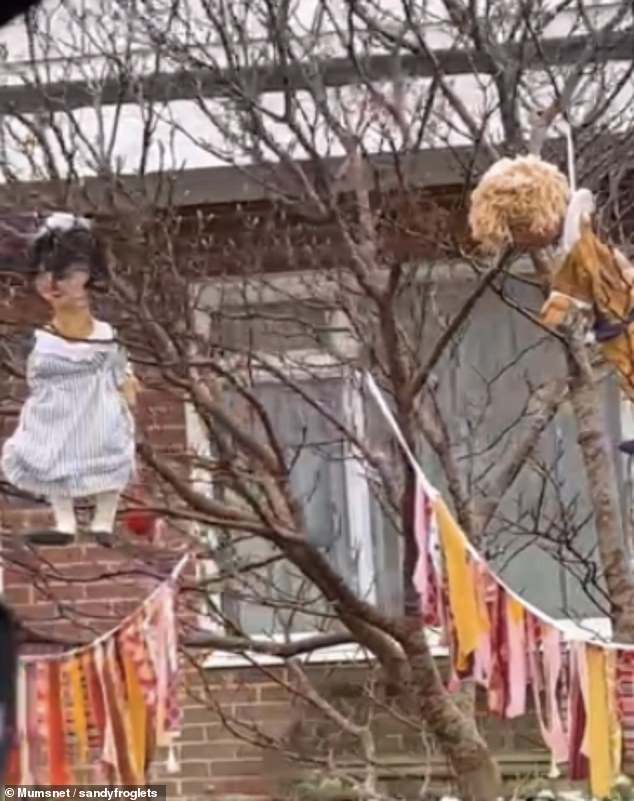 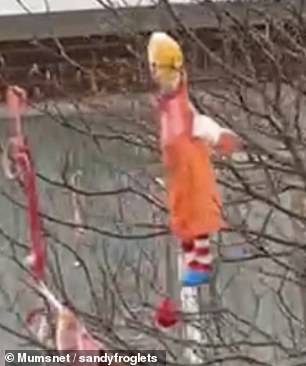 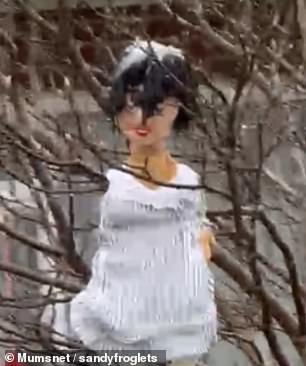 One of the dolls was made with orange overalls and white and red socks and yellow hair (left), while another rag doll looked like a bride, with a white dress and veil 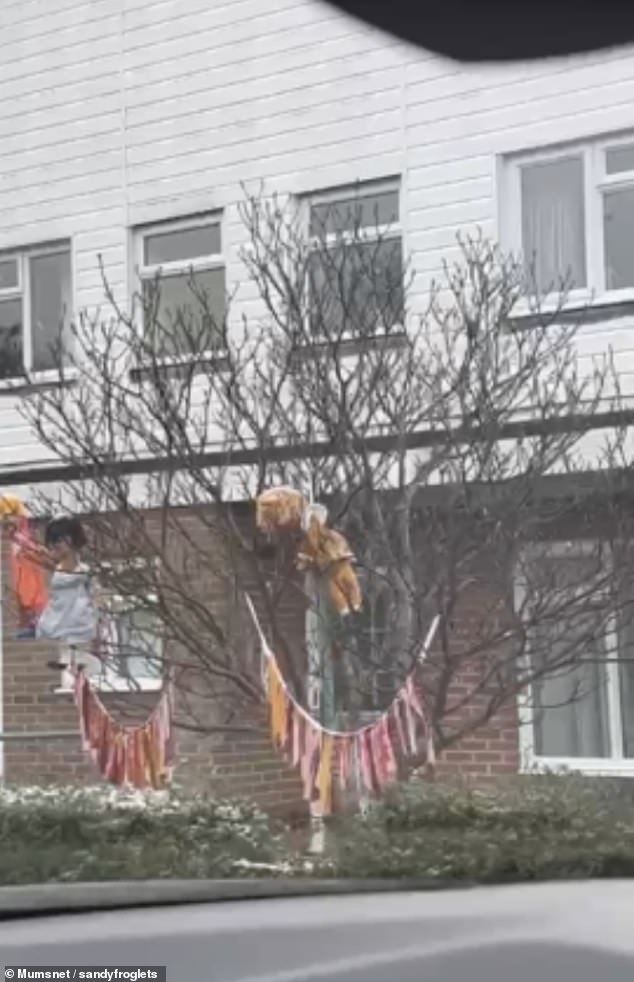 The woman took a snap of some of the dolls hanging on her neighbours trees, which are visible from the street, pictured

‘Nothing unusual goes on here!’

People had a lot of opinions about the ‘hilariously awful’ dolls, but there was no definite explanation as to what the neighbours were using them for.

One person wrote: ‘It’s likely hoodoo/voodoo/vodou. Given they are hanging from a tree outside it’s likely they are meant to attract protective spirits- so to protect house and occupants. Could also be trying to attract healing spirits.

‘Otherwise, they may have had someone/people recently die and are using the dolls to try and connect with them as that’s common in this religion and known to do via dolls in trees.

The mother, who said she lives in a quiet town where nothing unusual ever happens, added she wanted to ask her neighbours about the dolls

‘Or maybe they have just had some interest in connecting with ancestors for some reason and are trying this. Only they know really.

‘Or maybe something else altogether but put money on the above if betting. Don’t balls up to their door and ask them as that’s a d*** move and whoever said to ask them to take them down, pull your head in. It’s not my thing but we all have different belief systems and do things differently.’

However others weren’t so sure, with one writing: ‘For a laugh, I bet. To freak people out. Seems to be working.’

‘That is really spooky! I don’t know enough about pagan to say one way or another, but the bunting type rags make me think it could be,’ another said. 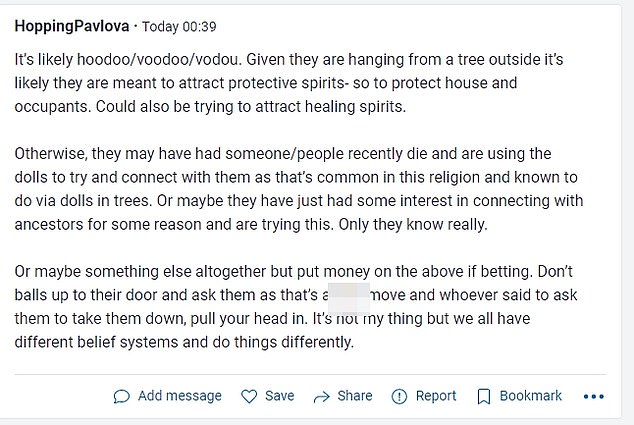 ‘Knock on the door and ask (in the morning). Say the kids are creeped out and you want to tell them what it is.

‘Unless the dolls have the kids faces on – then call the police,’ one said.

Another wrote: ‘After seeing the picture I don’t whether to laugh or cry. I think I’ll do both.’

One added: ‘Wow I try be open-minded to other cultures etc, but that is the stuff of nightmares.’ 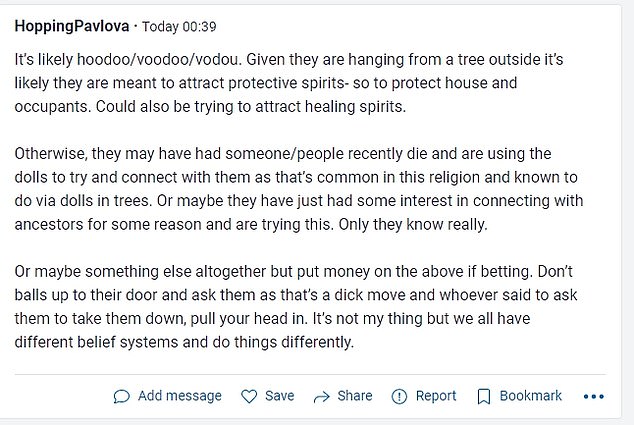 ‘I’ve seen enough horror movies to see how this is going to play out. You’re going to hear a noise in your house one night and it’s going to be the doll in the white dress, wanting to play a game,’ one joked.

Another person who said they identified as pagan said they didn’t think the practice of hangings dolls on trees was part of the ‘pagan belief system.’

‘And it’s certainly not something I’d be doing,’ they added.

But other had a more rational perspective on the dolls, and said: ‘What if their kids made it and you’ve got the wrong end of the stick?’ 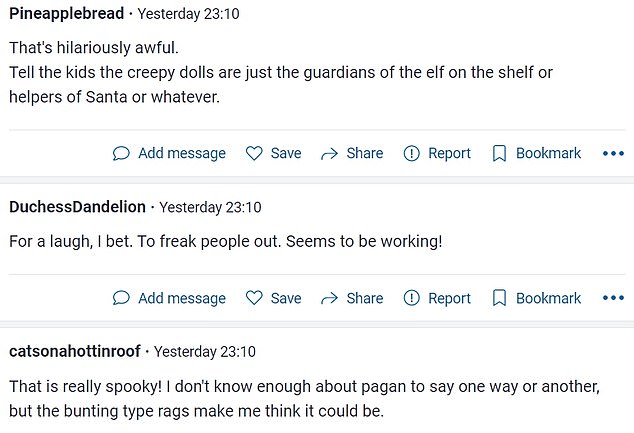 ‘Some of you have watched too many horror movies,’ another said.

One offered: ‘How bizarre. Could it be some sort of ‘modern art’ installation? I’ve seen similar installations (in the gardens of mental health hospitals.’

One person suggested the mother could ease her children’s mind by pretending the dolls were in fact there to help Santa.

‘Tell the kids the creepy dolls are just the guardians of the elf on the shelf or helpers of Santa or whatever,’ one said.

If you enjoyed this story…

And Mum sparks debate after refusing to let her sister bring extra food for her ‘fussy’ young nephews at Christmas : ‘They need to get over it’