Cherry Bar owner James Young reckons venue owners know how to follow the rules better than anyone else – "we just dress better" – making him well qualified to take the reins as Melbourne's first "night mayor".

Mr Young is running as a councillor on lord mayor Sally Capp's ticket for Melbourne Town Hall. Cr Capp has promised that if both are elected later this month, she will anoint Mr Young as the city's first after-dark mayor. 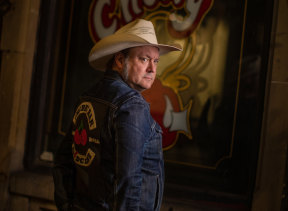 "Well, the minutiae needs to be worked out," Mr Young says. "But I jokingly say that the lord mayor works from nine to five. So do I, but I'm working 9pm to 5am."

Cities in the US and Europe have installed so-called night mayors. But think of them less as a night-time sheriff or city leader, and more a liaison between a city's night-time economy and town hall.

"As night mayor, James would champion the needs and ambitions of the many sectors that make up our comprehensive night-time offerings," Cr Capp said.

"He would help ensure the City of Melbourne is doing everything possible to support entertainment, dining and retail in a vibrant after-dark Melbourne."

Among his priorities would be helping night-time businesses including pubs, clubs and live music venues get up and running as quickly as possible as restrictions ease.

Cr Capp said Mr Young would also be responsible for clearing "red tape", including City of Melbourne and licensing regulations, to help traders reopen in a "COVID-safe" manner.

"Our city's night-time economy supports jobs and businesses and enhances our reputation as Australia's events and cultural capital," she said.

"Hospitality and entertainment providers will need help to get going again after the economic devastation caused by the COVID pandemic."

A snapshot taken in 2018 showed Melbourne's night-time economy generated $3.52 billion in sales revenue, an increase of 9.6 per cent on the previous year.

"Before this pandemic, Melbourne had the fastest growing late-night economy in the southern hemisphere and we were world famous for it. It was a huge tourist attraction," Mr Young said.

"At the moment, unfortunately, we're like a wounded dog sitting in the corner of the room and we're in crisis."

Live music venues will be among the last businesses to reopen under the Victorian government's road map, given the sheer logistical headaches presented by an industry that is defined by social proximity.

Still, in the midst of every crisis lies opportunity. Like other live music venues, Cherry Bar has taken to doing deliveries, creating more merchandise, and planning for outdoor concerts and dining.

Mr Young said it had been a "diabolical" year for the entertainment and live music industry. But he urged the city's arts and entertainment scene to hang on.

"I love Melbourne, and Melbourne's in trouble and it's time for me to give back to Melbourne," he said.

"I want to help Melbourne get back to where it belongs. In some respects, that's actually an exciting concept, that Melbourne needs us, and we can band together on a journey in tough times and come back stronger than ever."

Broadcaster and academic Sally Warhaft, who ran against Cr Capp in the 2018 byelection, promised to introduce a “night tsar” if elected, to tackle the CBD's booming dusk-til-dawn economy.