The Yellowjackets and Scream actress on starring in an instant cult classic and spinning pandemic heartbreak into creative works of art. 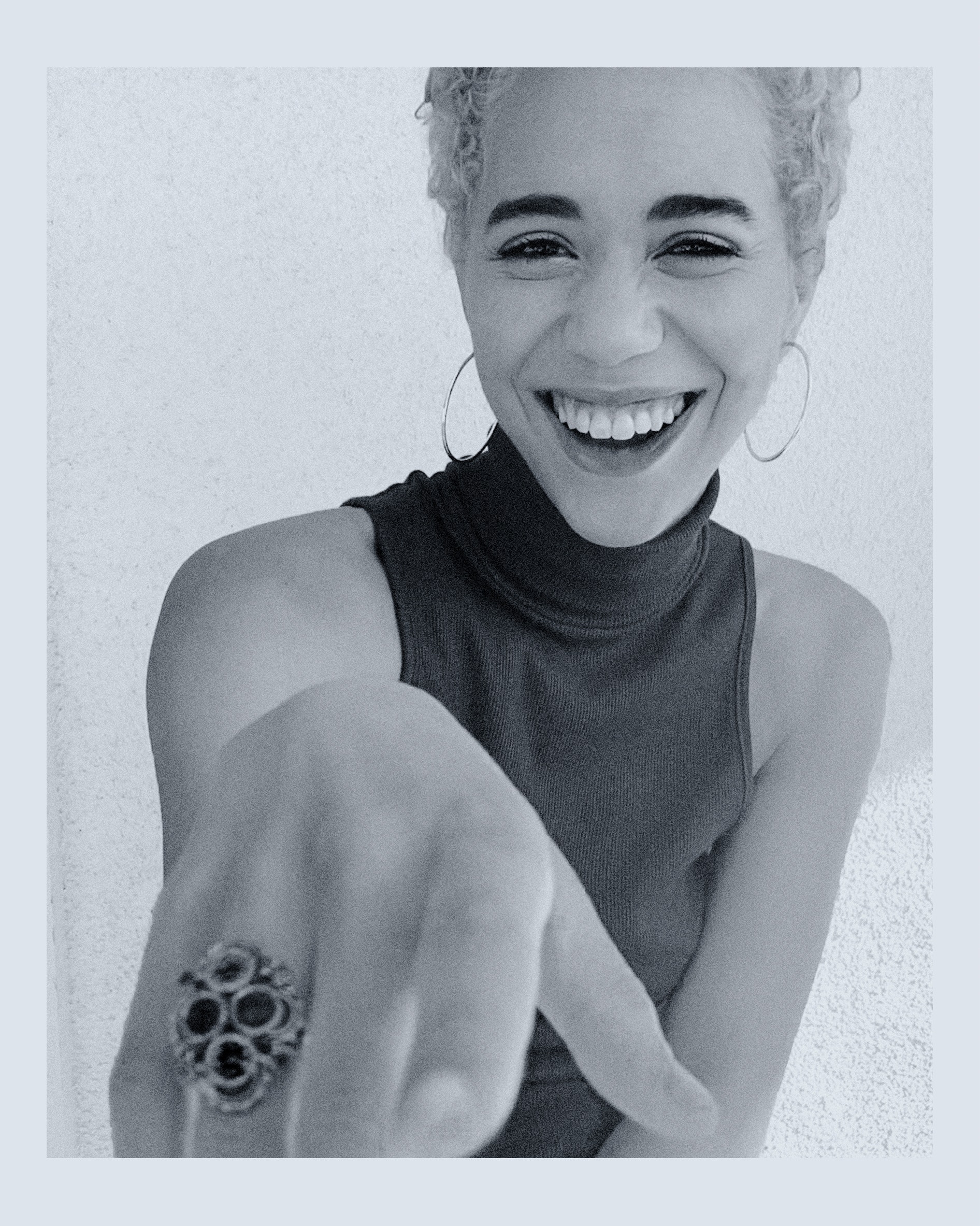 “No one knows what’s going to happen,” says Jasmin Savoy Brown, minutes into our Zoom call together. For most conversations, it might seem a bit early to get so existential, but Brown is talking about Yellowjackets, the Showtime series on which she stars as a 17-year-old soccer champ whose plane full of teammates crash lands in the Canadian wilderness in 1996; the passengers are left to survive on their own. Brown plays Taissa, a natural leader on the team, who eventually is rescued from the wilderness and, shown in flashes forward to 25 years later, becomes a successful politician who marries a beautiful woman and raises a beautiful kid in a beautiful home. “This is a show about women. There are men in the show, but it’s not their world,” the 27-year-old actress goes on. “This is a woman’s world, seen through a female lens in its savagery, backstabbing, self-consciousness, and vulnerability. It’s ugly, but it’s really beautiful. And I think part of what’s so beautiful is that it’s honest in its ugliness.”

“Whatever your theories are about the show and all the storylines, they’re all incorrect,” Brown says, and she’s probably right—the series, billed as a cross between Lost and Lord of the Flies, has spawned endless theories on Reddit, Twitter, and anywhere else on the Internet where the Yellowjackets hive has congregated to speculate about the opening scene of the series, which depicts a flustered girl running through the woods only to be captured and eaten by her teammates. Eight episodes into the 10-episode season, which was just renewed for another run, and we still don’t know who ate whom. “I am very proud of my character and the arc that she has over the course of this season,” Brown says, careful to keep all spoilers under wraps as she gleefully talks about the show. “A lot of crazy shit goes down—it gets very dark, as expected, but Taissa becomes more of a leader in her own right.”

One aspect of the show that fans and critics alike love about Yellowjackets is the impeccable casting, and the ways in which the younger counterparts seamlessly match the mannerisms, expressions, and tics of the older actors who play them—including Tawny Cypress, Christina Ricci, Melanie Lynskey, and Juliette Lewis. The adult version of Taissa, played by Cypress, is stoic, sharp, and at face value, the most successful of the survivors. But under the surface—and especially at night—she is harboring some deep guilt and shame about her behavior. “Tawny and I never disagreed on anything,” Brown says. “We actually didn’t have to talk about forming the character too much because we were just on the same page from the get and we approached her the same physically and energy-wise.”

The cast met in late 2019, filmed the pilot directed by Karyn Kusama, halted during the pandemic, and restarted again once production could safely resume. “It really felt like we were shooting two completely different shows,” Brown reveals, with the younger cast shooting for a week at a time on location in the woods outside of Vancouver, and the older cast shooting the following week in a more suburban locale. “It was rainy and hot and exhausting and fun, but really physically and psychologically demanding—and then we would have a week off while they went and shot their fun whodunit,” Brown says with a laugh.

The wilderness climate thankfully didn’t take that much getting used to for Brown, who grew up in Oregon before moving to Los Angeles to become an actor. She has known since she was a toddler that she wanted to perform, but jokes that she has to thank Oprah Winfrey for the manifesting the courage to turn it into a career. “When I was a little girl, I would see her say that she used to think someday she would be rich and successful and happy, and I went okay, cool, let me do that,” she says. “I think it speaks to the power of women—Black women, and also queer Black women such as myself—saying exactly what they want without shame or false humility. We’re not supposed to say, ‘Yeah, I am going to be rich. I plan to be very successful. I will be happy. I want to own three properties.’ Women, Black women, or any minority, we’re supposed to just be grateful to be here. So when I saw a Black woman do that from a very young age, that gave me permission. I want to do the same thing for others.”

As Yellowjackets season one wraps up, Brown will be seen in Scream, another project in which references to 1996 abound. Twenty-five years after the Woodsboro murders terrorized Sidney Prescott (Neve Campbell), the Ghostface killer is back again. Of course, when you’re part of a project that descends from such a Hollywood legacy, you are sworn to secrecy, so Brown cannot divulge much about her role in Scream. What she can say, though, is that not even the cast knew who the killer was until a couple weeks before they wrapped. “There were multiple scripts with different endings and we all received different versions where the killer was a different person or different people,” she says. “I would say that people will be happy with all of the choices made. It is relevant and they don’t misstep. This is a smart franchise and it works for a reason.”

Next, Brown will do something she has been reticent to pursue in the past: release more music. “I love singing, and it is the thing that I’ve been more afraid to put out there,” she confesses. “I’ve been making music as long as I’ve been acting, but I only just started releasing my music, which is terrifying and so exciting.” She credits the pandemic and an amicable break-up with her partner (the two have since remained friends) with forcing her to take the plunge and write an album. “I was stuck with my feelings. There was nowhere to go. So I sat down with my guitar every day and songs poured out of me,” she says.

This month, she will also release her podcast for Netflix, The Gay Agenda, in which she and her Yellowjackets co-star Liv Hewson (who also plays her love interest in the series) interview queer people in the public eye who are successful and happy. “So much content is tragedy porn—so I’m very proud,” she says, of her decision to make space for queer stories that can be uplifting and inspiring. It’s a venture in line with her original goal that she manifested back when she was a little girl watching Oprah: “I’ve worked so hard to do my best to make every space that I leave better than when I found it.”