Trimphones, cordless, bricks: over the past few decades, I've embraced every kind of phone, except for one – the smartphone. It's an admission that horrifies my peers, singling me out as the lone analogue woman in our digital world. "How can you do your job?" they ask, along with: "How do you get to places on time?" And: "How on earth do you even function?" 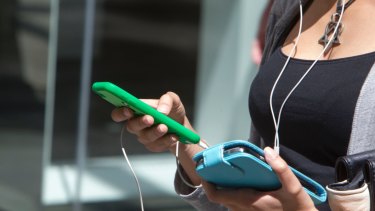 Android and iOS have worked their way into the lives of users, providing everything they need.Credit:Glenn Hunt

After a new report from researchers at Google on what they are doing to our health, however, I feel more vindicated in my decision to live without one than ever before. Researchers studied people aged between 18 and 65 whose smartphone use ranged from "healthy levels" to those who all but fell to pieces if they couldn't access it day and night, finding that the technology was responsible for chronically raising the levels of cortisol – the stress hormone – in participants. We feel a "constant sense of obligation … when your phone is in sight or nearby, or when you hear it or even think you hear it." This is all "generating unintended personal stress", the report added, which can produce life-shortening results, including spiking our blood pressure and heart rates.

Indeed, Android and iOS have worked their way into the lives of users, providing everything they need, replacing boring old clocks and maps, offering endless communication and limitless entertainment, culture and chaos, all at the tip of a finger.

But as the study shows, health-harming guilt and worry are the price to be paid for all this convenience. Participants added they felt guilty when they didn't reply to emails or posts on social media, or became anxious if their messages were not answered quickly, constantly checking their phones in case they missed something.

It's almost as if we've forgotten what life was like before they were everywhere.

It's not that I'm against digital technology, which can be brilliant – as a freelance writer I spend a lot of time at my computer, where email is a vital form of communication, while social media sites are ideal places to catch up with friends scattered around the globe, pick up titbits of work and, yes, while away the odd half-hour or two looking at cat videos on Facebook.

And I have tried mobile phones before – two, in fact – though they were the unattractive, bricky variety and not at all smart. My relationships with both were unsatisfactory and short. My husband does own a smartphone, as does our eldest daughter (against my better judgment), and I sometimes borrow his to send her a text (though my illegible messages provide endless entertainment for her and her friends). Honestly, I'd rather just call, but she finds it embarrassing to hold an actual conversation.

Google's study cited one subject as saying: "Without my phone, what would I do? Just stare out of the window?!"

"Yes!" I wanted to shout, baffled. Because that is what I do – although, as a mum of three, that's usually to find out who's fighting with whom.

I read books. I look at clocks. If I'm out and about, and want to know the time (I don't wear a watch, possess a handbag or have a purse), I will ask another human.

I schedule everything, from mine and my husband's freelance work to our children's numerous activities, birthday parties, school events and everything else in between, using a paper diary, which sits on my desk and is full of scribbles and doodles.

And if an email comes in that needs urgent attention, I get to it via my computer, which is turned off at the end of the day. Perhaps most important of all, I speak to real people, about all manner of things, often.

Google's report recommended short-term disconnections for people who were glued to their mobiles, reducing the dread of missing out on something little by little – like an addict's withdrawal.

It also suggested mobile phone operators should develop mindfulness apps that would encourage people to take a break from their devices.

I have a more radical solution: go cold turkey.

Yes, it may be hard, but there is everything to be said for stopping scrolling and looking up. The world is out there, and there's so much more to it than can be experienced through a tiny screen.

09/05/2019 Lifestyle Comments Off on Yes, I can function without a smartphone … and so can you
Lifestyle