Sydney's Super Netball coaches don't think there's a need for the disciplinary mechanisms used by the football codes after a fierce game last weekend, but the ladder leaders have discussed what might happen if a player does step out of line.

Sunday's game between the Giants and Firebirds in Sydney was an especially physical contest, described in the competition's official match report as a "60-minute wrestling match". 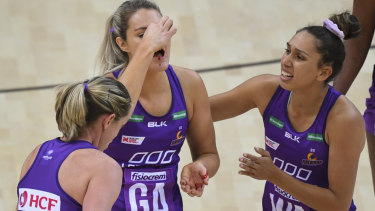 Gretel Tippett suffered a cut to her nose in the Firebirds’ physical Super Netball clash against the Giants on Sunday.Credit:AAP

Firebirds' shooter Gretel Tippett had a bloody nose, tended to for several minutes after she was accidentally stuck by an elbow from Giants' defender Kristiana Manu'a.

The match contained an extraordinary tally of 159 penalties, 90 of them against Firebirds with their defender Kim Jenner racking up a league season-high individual tally of 32.

Netball doesn't have a judiciary process or match review panel yet, as the game hasn't produced the uglier incidents that occur in the football codes.

"Along comes professionalism, and the more they train, and the harder the hits, and the more intense it will get," said Briony Akle, coach of the ladder-leading NSW Swifts. We've often spoken about what happens if one player got ousted one week." 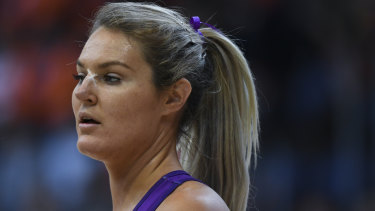 Patched up: Tippett was able to play on after receiving treatment.Credit:AAP

Both Akle and her Giants' counterpart Julie Fitzgerald stressed games were normally devoid of any malice.

"I think netball is just played at the highest intensity and there's never any malice aimed for one particular player if they are injured," Akle said.

Fitzgerald said she had expected a hard but fair contest against Firebirds. "There's a difference between what you would classify as a dirty match and a game that's really hard fought," Fitzgerald said.

"When you come up against (the) Firebirds, you know that it's going to be really hard fought, but it's going to be a fair contest. There's no intent for anyone to go in and cause any damage. It's just a real hard contest for the ball."

Fitzgerald, who has coached in all three of the major netball competitions in Australia over the past 20 years, didn't think a match review panel or judiciary system was needed.

"I think nothing is ever deliberate," Fitzgerald said. "Players can get a little bit overzealous and need to pull it back in, but I don't think there is ever any malice involved."

Akle is hoping her England international shooter Helen Housby will return for next Saturday's home match with the Vixens, after she missed last weekend's two- goal loss to second-placed Sunshine Coast.

Lightning closed the gap to the Swifts to three points after last weekend, with third-placed Vixens another point back.

05/08/2019 Sport Comments Off on ‘A 60-minute wrestling match’: But game not over-rough, say coaches
Lifestyle