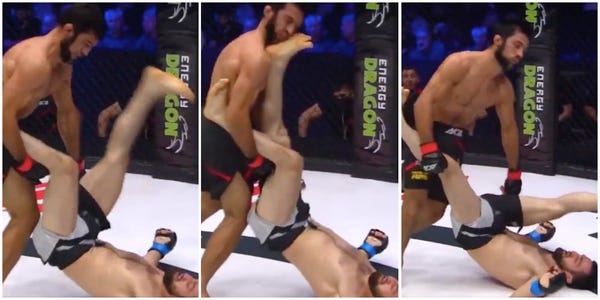 A Russian MMA fighter scored a rare, up kick knockout when he thrust his heel into his opponent's chin while in a seemingly vulnerable position with his back on the canvas.

It all went down at an Absolute Championship Akhmat (ACA) event, ACA 111, in Moscow's Krylatskoye Sports Palace.

Loma-Ali Nalgiev competed in a lightweight match against fellow-Russian Imanali Gamzathanov, but finished the fight midway through the first round with an ingenious kick from the ground.

Gamzathanov was actually in a traditionally dominant position, however, as he stood up while his opponent lay grounded, he forgot to defend himself and left his face open to an inventive kick from the bottom.

Nalgiev drove his heel into Gamzathanov's face and before he could land a second strike, he had already had the fight won, with Gamzathanov falling helpless to the canvas.

It was all over. Nalgiev had won by highlight-reel knockout.