Kitson was a substitute for Stoke’s game against Arsenal in February 2010 during which the Gunners midfielder had his right leg broken in a challenge with Ryan Shawcross. 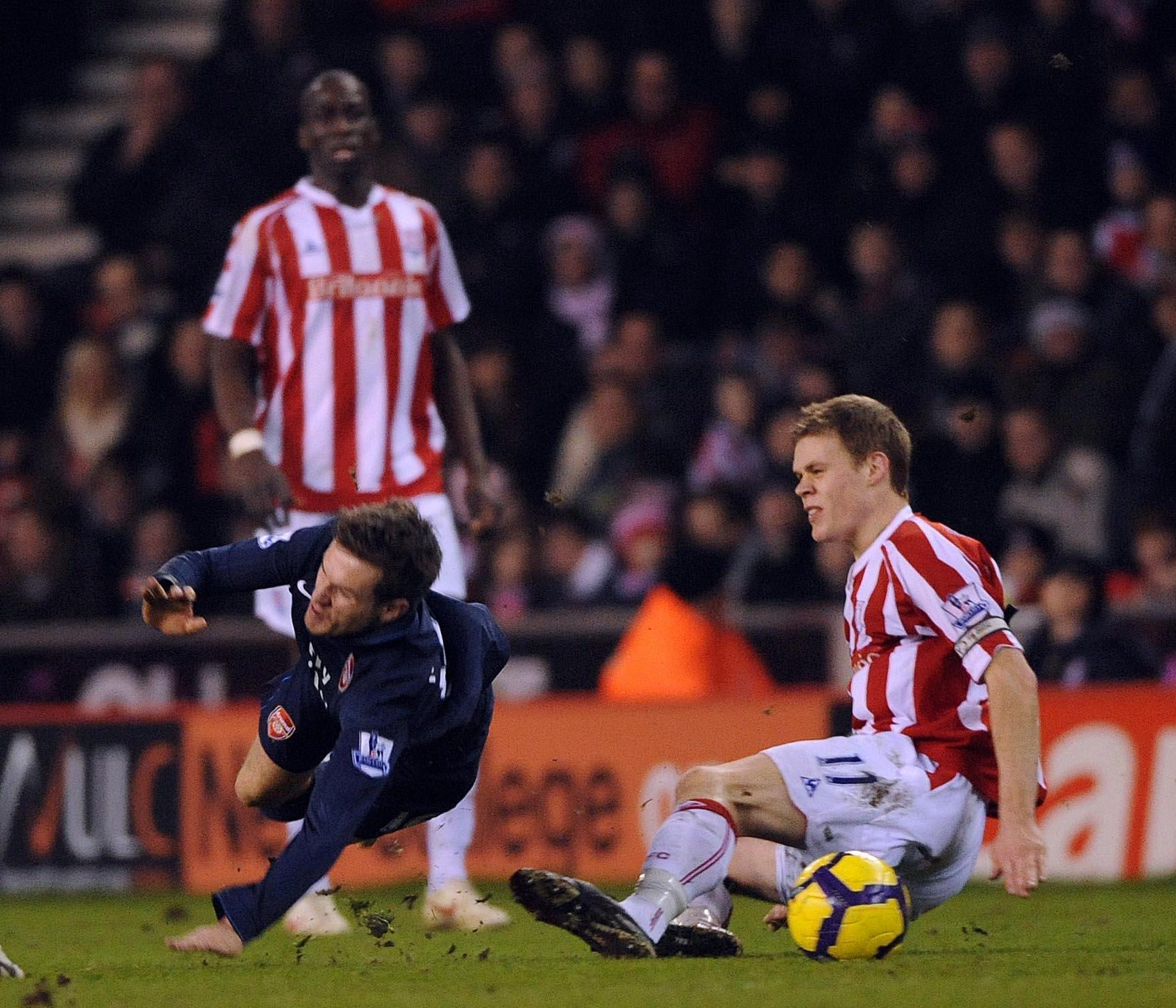 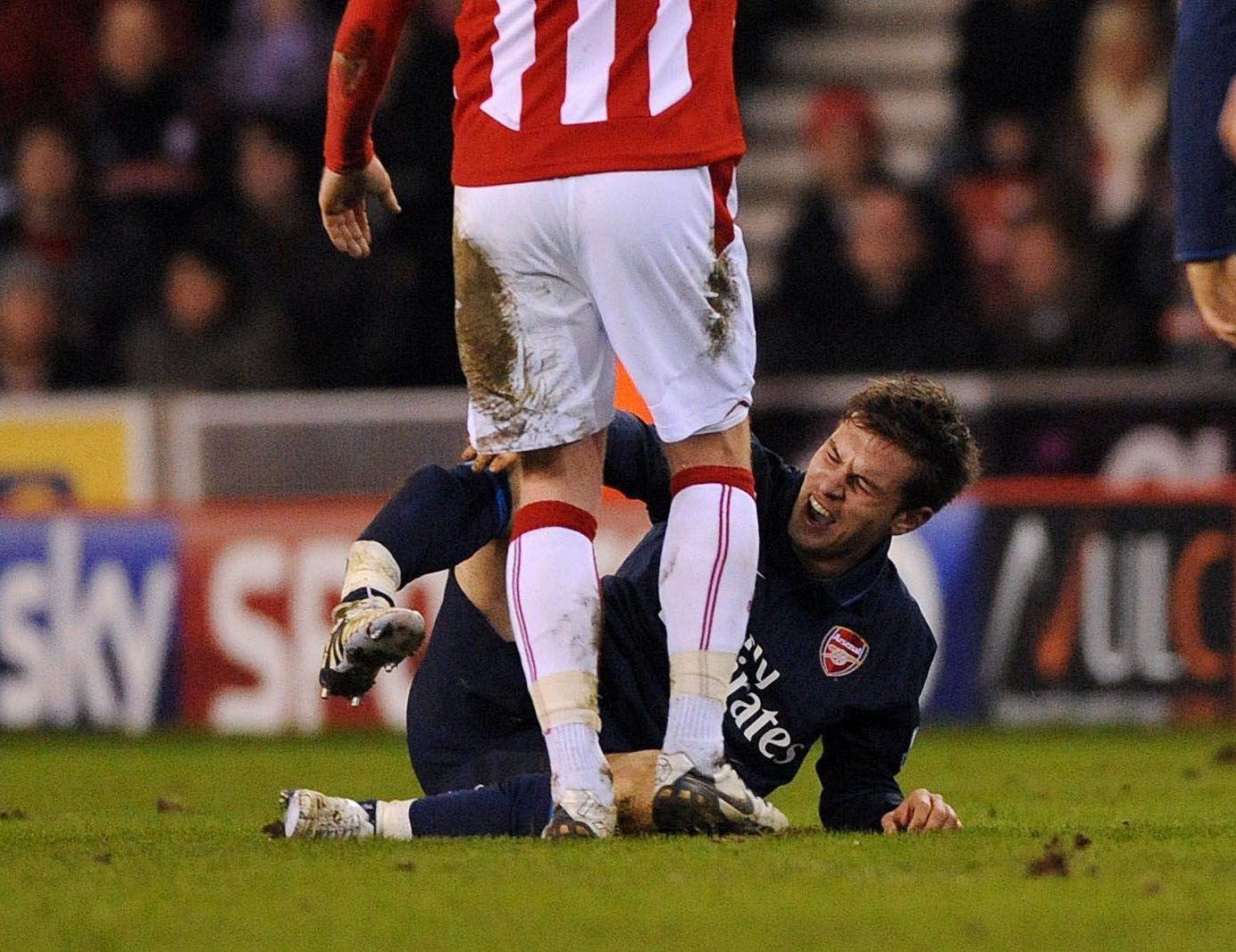 After Shawcross' suffered a horrific leg break of his own in a pre-season game against Leicester City, vile Arsenal fans sickeningly described the injury as 'karma for Ramsey'.

Back in December, SunSport columnist Kitson revealed the untold story behind that Ramsey injury – one of the most shocking moments in Premier League history…

I WAS there when Ryan Shawcross snapped Aaron Ramsey’s leg in half.

I heard the crack of Ramsey’s leg from the bench. I heard the screaming.

And the build-up to the game contributed to this moment. 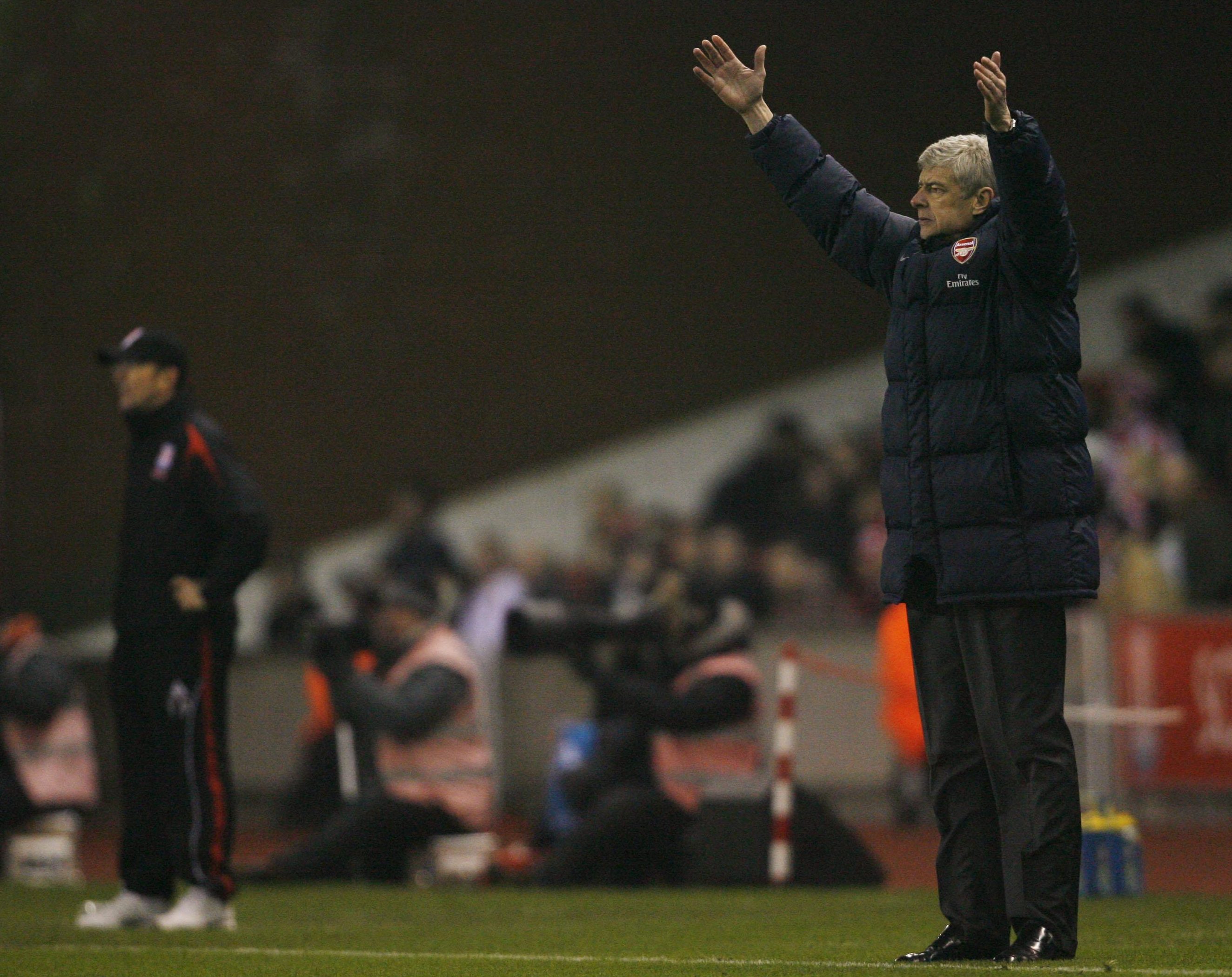 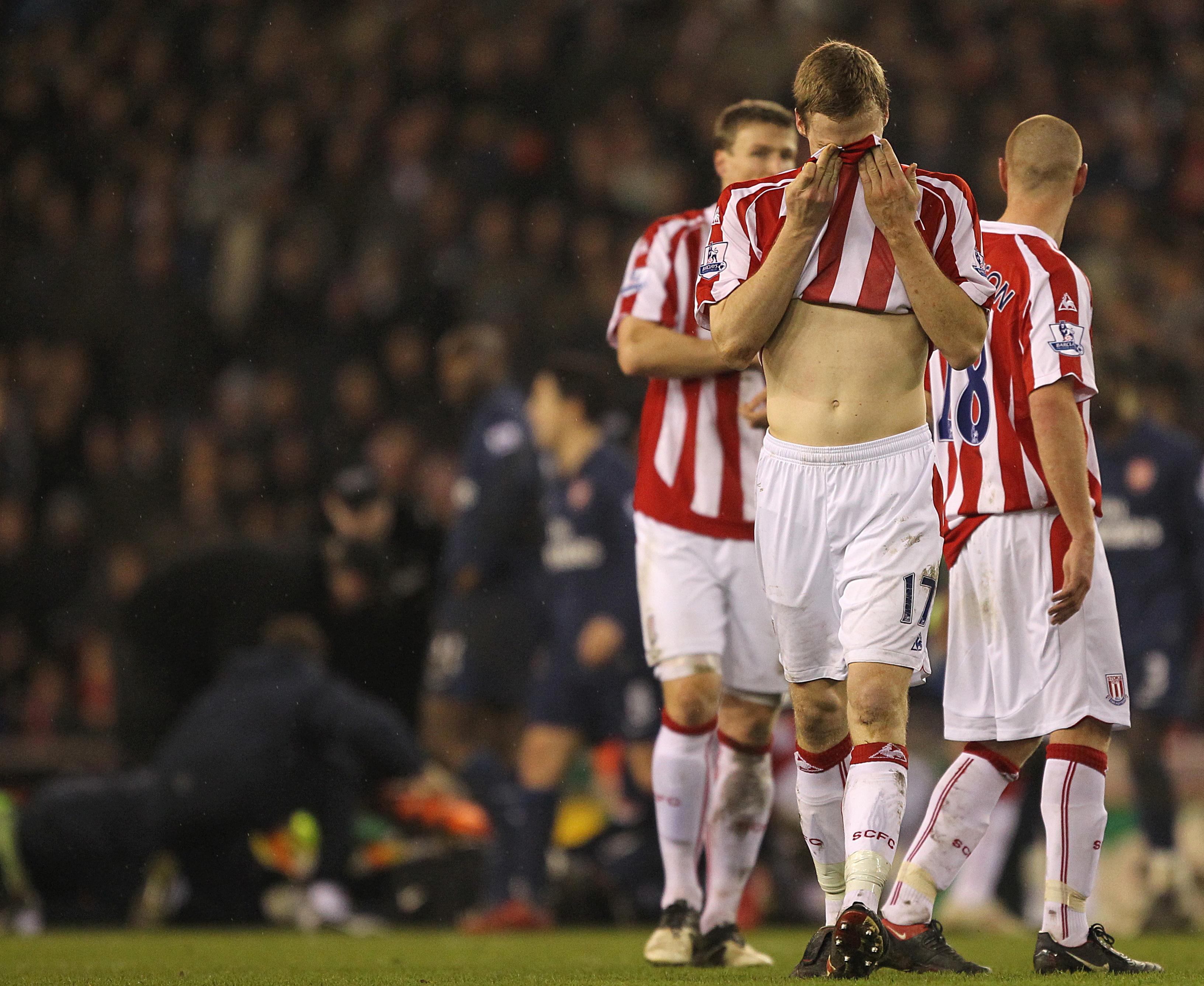 While Wenger hated the way Stoke played. They were the direct opposite of each other in football terms.

They used to have little snipes at each other in the media.

All week I had never seen a manager so desperate to win a game of football, it was bordering on out of control.

In training, I remember doing the set-piece routine from corners.

Shawcross and Abdoulaye Faye were preparing to play as central defenders, one of them would go across the near post.

And I just remember us practising it over and over again, the corner coming in and Pulis screaming: “Ryan go across the f****** front — if you miss the ball you f****** well make sure you take someone out.

“You put the keeper through the net and into the stand behind. If you miss the ball you make sure you take someone with you.”

Like every other game he was telling us to turn them and get at them and all the usual stuff managers say. 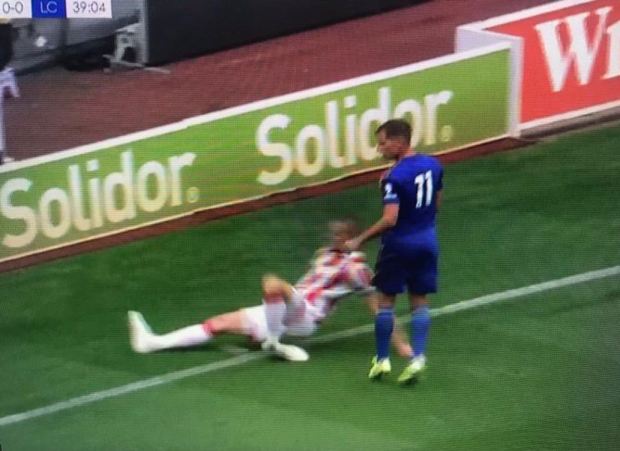 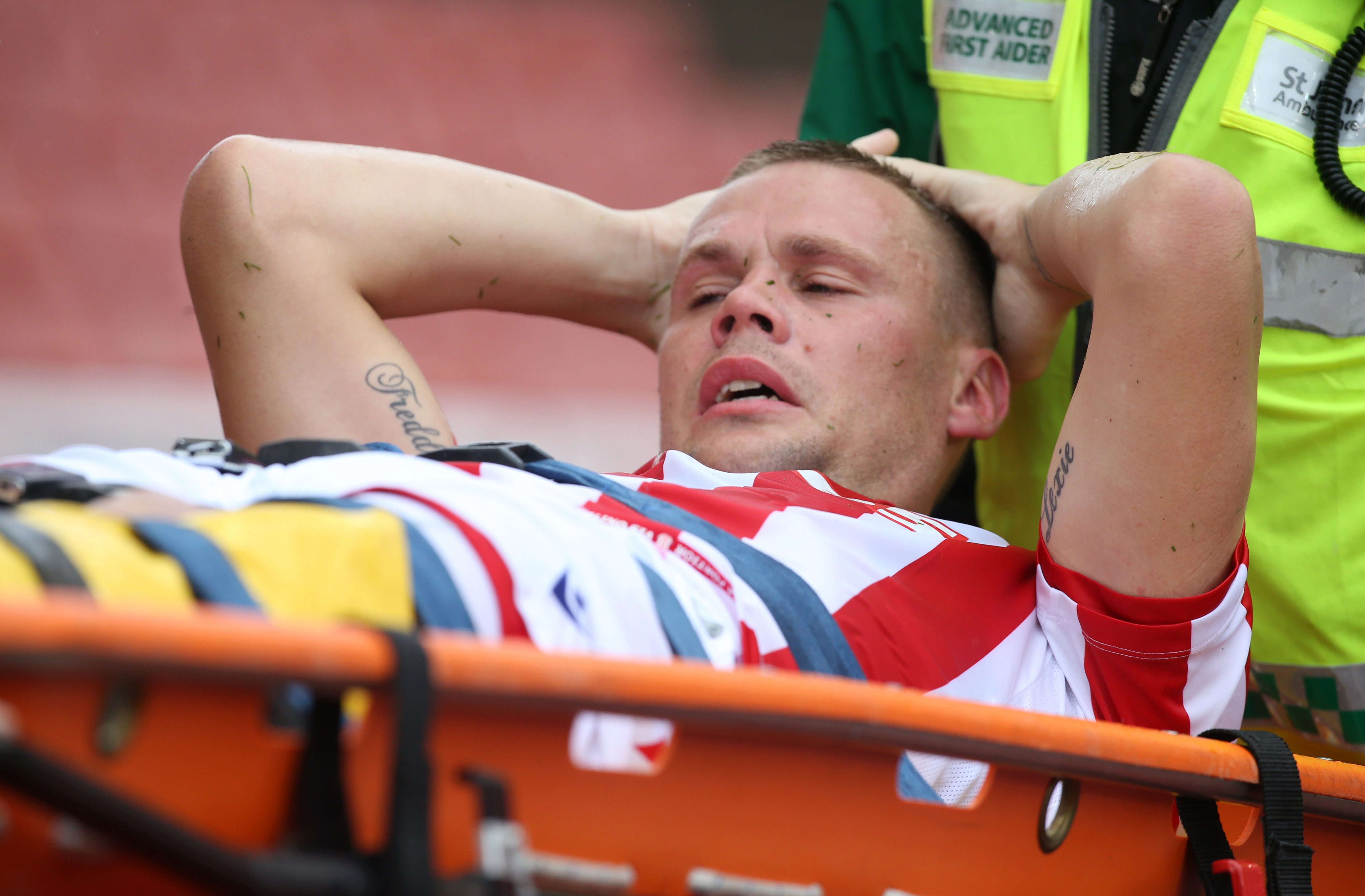 But that particular game it was very much ‘lads, don’t forget, be aggressive in the tackle, dominate your man.’

That was the message.

It started that sort of feeling where it began to bubble within the players through the course of the week.

Until finally it got to match day. The changing room was full of aggression and I remember the team talk more than anything.

And, of course, the upshot of all of that energy was that we went over the top and it cost Ramsey a year of his career.

It seemed to me that was as a direct result of players reacting to their manager’s over enthusiasm and buying into that whole thing and carrying out his instructions and crossing the line.

And injuring players. Teams are a direct reflection of their manager. Without exception. We never sat in the dressing room and said ‘we are going to injure that player.’ 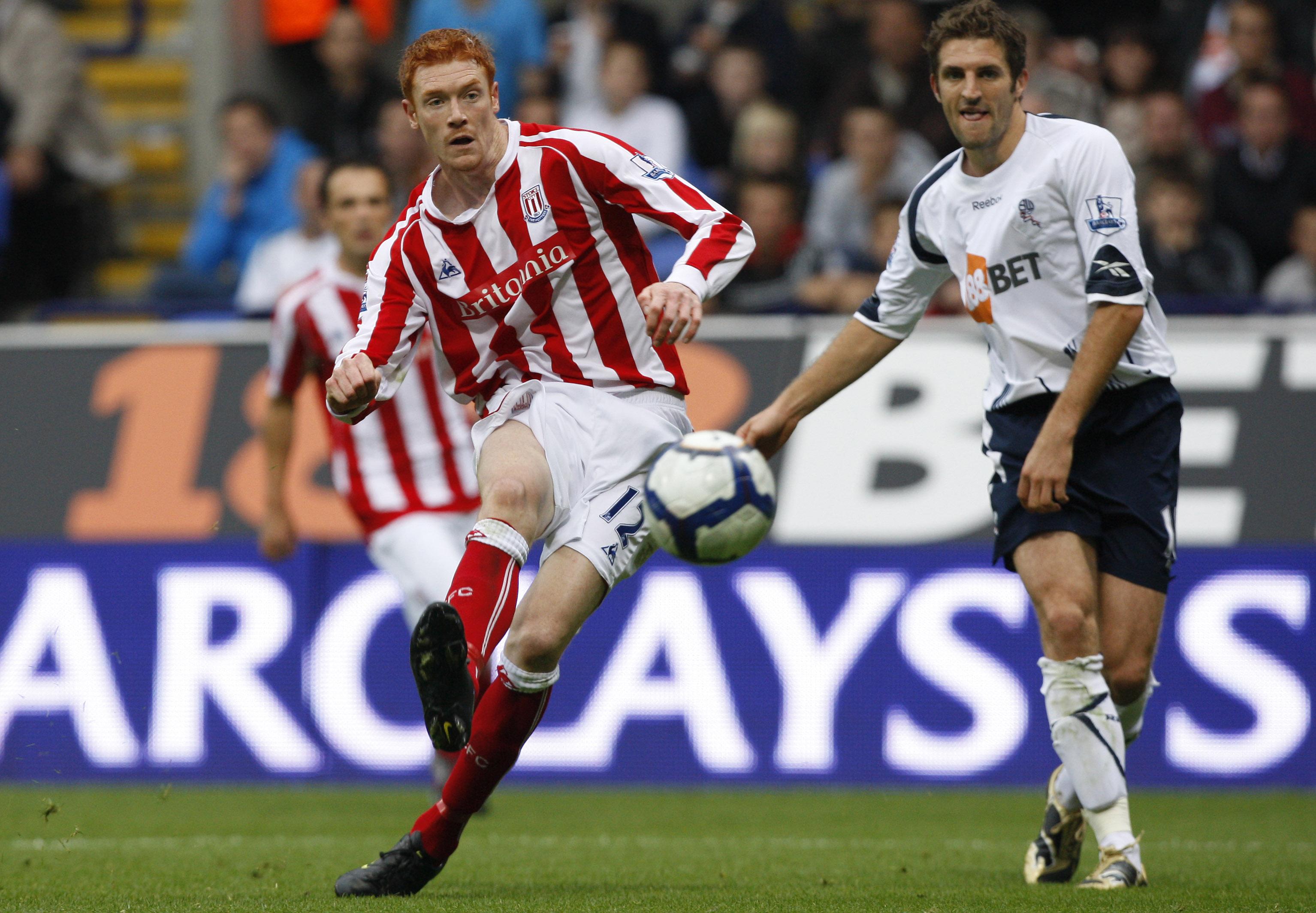 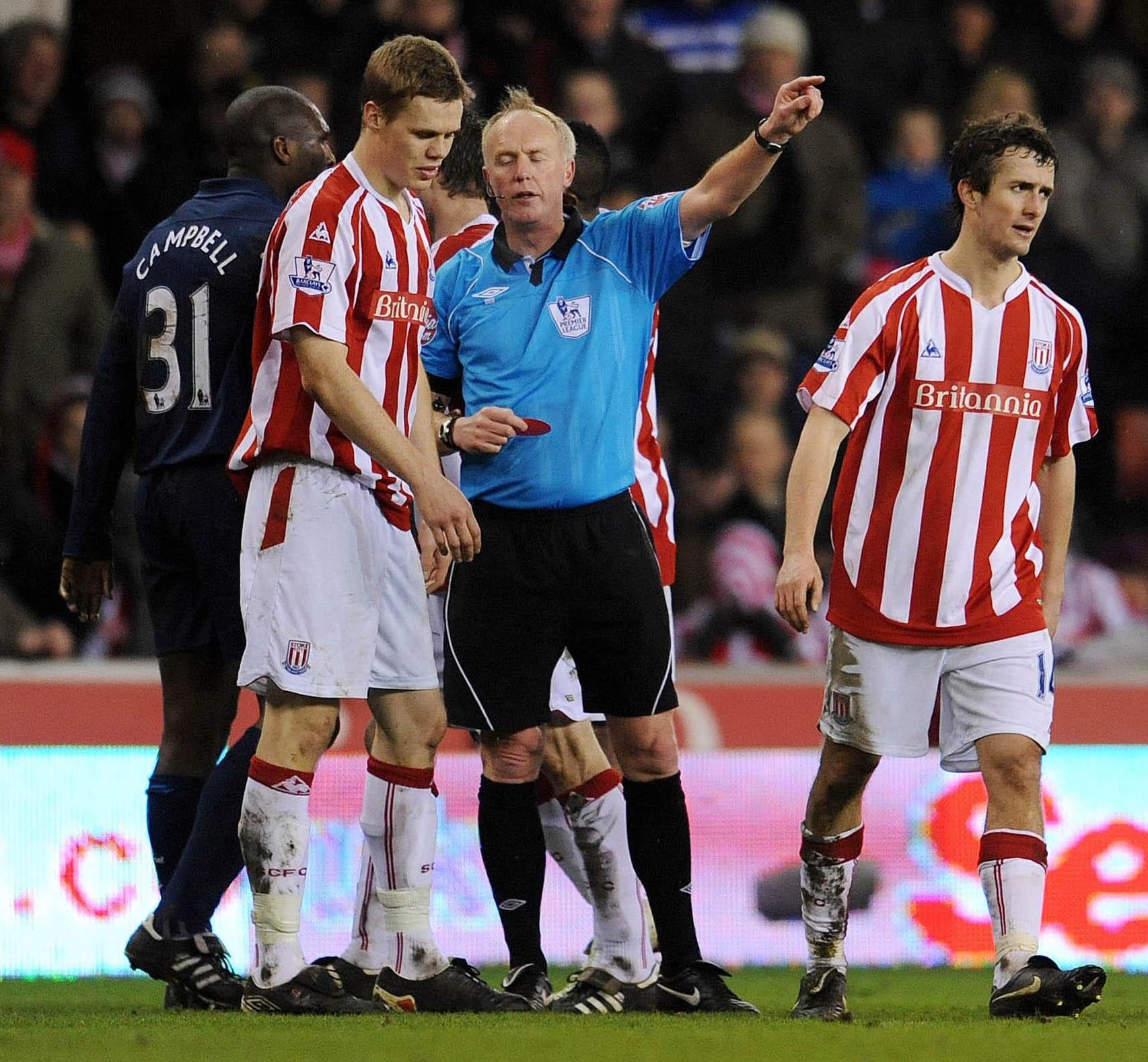 The one we knew we could get under the skin of was Cesc Fabregas, but he was quite good at giving it back as well.

It was just anyone in an Arsenal shirt, if you were near them you would let them know you were there.

You could just see it in the tunnel that they didn’t want to be there.

We would come out of the changing room first so they would come and line up next to us and we were all north of six foot.

You could just see them shrinking in the tunnel before you and Pulis really really played on that.

But it just went too far. His desperation to beat Wenger and justify his way of playing football. It crossed the line and went too far. 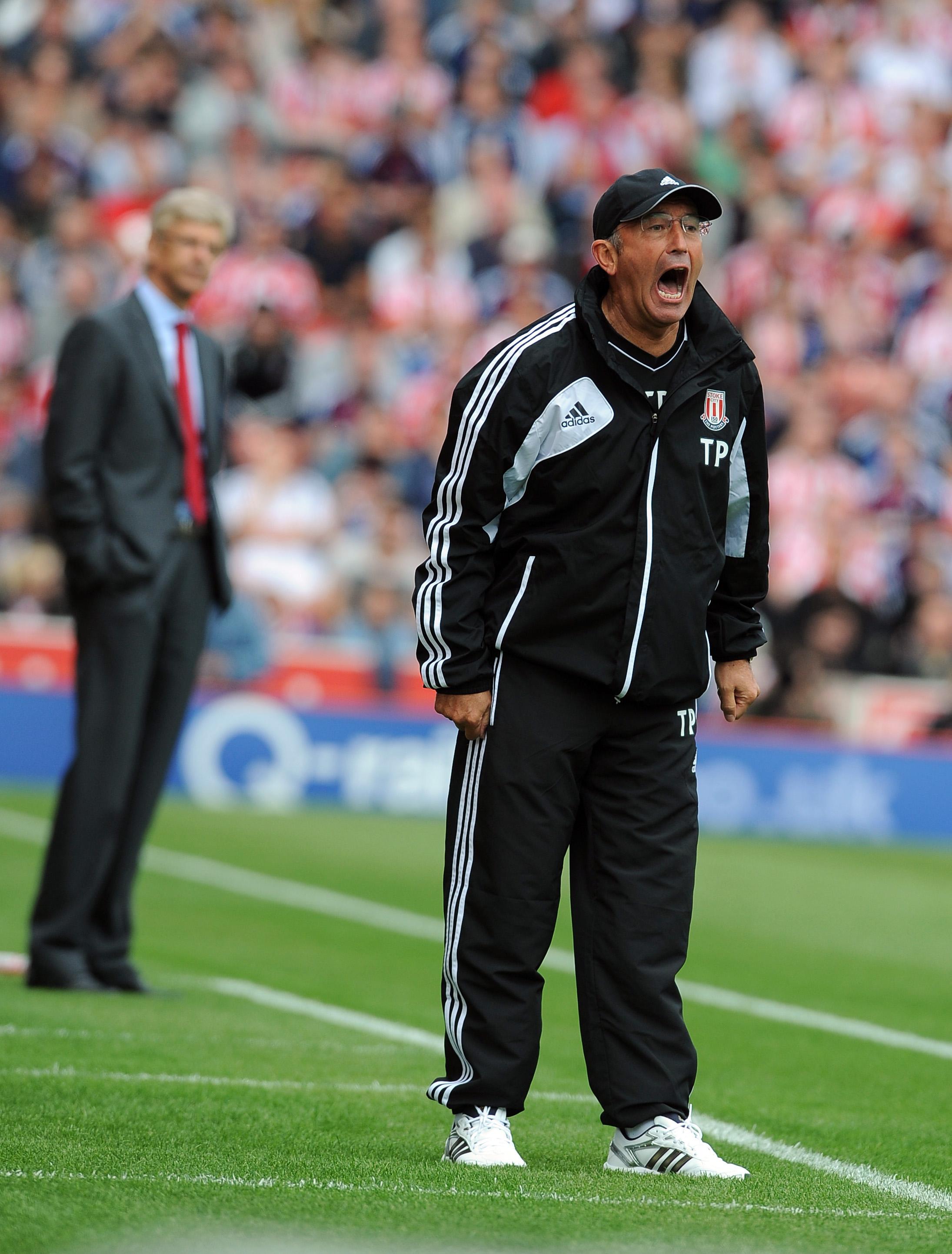 He was just desperate to win and some of the tackles we would put in — myself included because it was asked of you — were shocking really.

But as aggressive as we were, the first person on the scene with Ramsey was our midfielder Glenn Whelan, who held his hand for the whole time.

I remember looking at a picture of it afterwards and you think, ‘there’s something not quite right about this picture’.

It takes a few seconds to figure it out. Ramsey's leg was pointing towards the away fans. His body was facing me on the bench but his leg was at a right angle.

It was just horrendous. I distinctly remember Wenger turning around in the technical area absolutely horrified by it.

The first person he looked at when he turned around was me on the bench because I was in line with him.

Even though it wasn’t me who broke his leg, I was on that bench, part of that team.

Wenger gave me this look of complete and utter disappointment — the kind of look your dad gives you when you’ve f***** up, when he’s gone beyond anger. 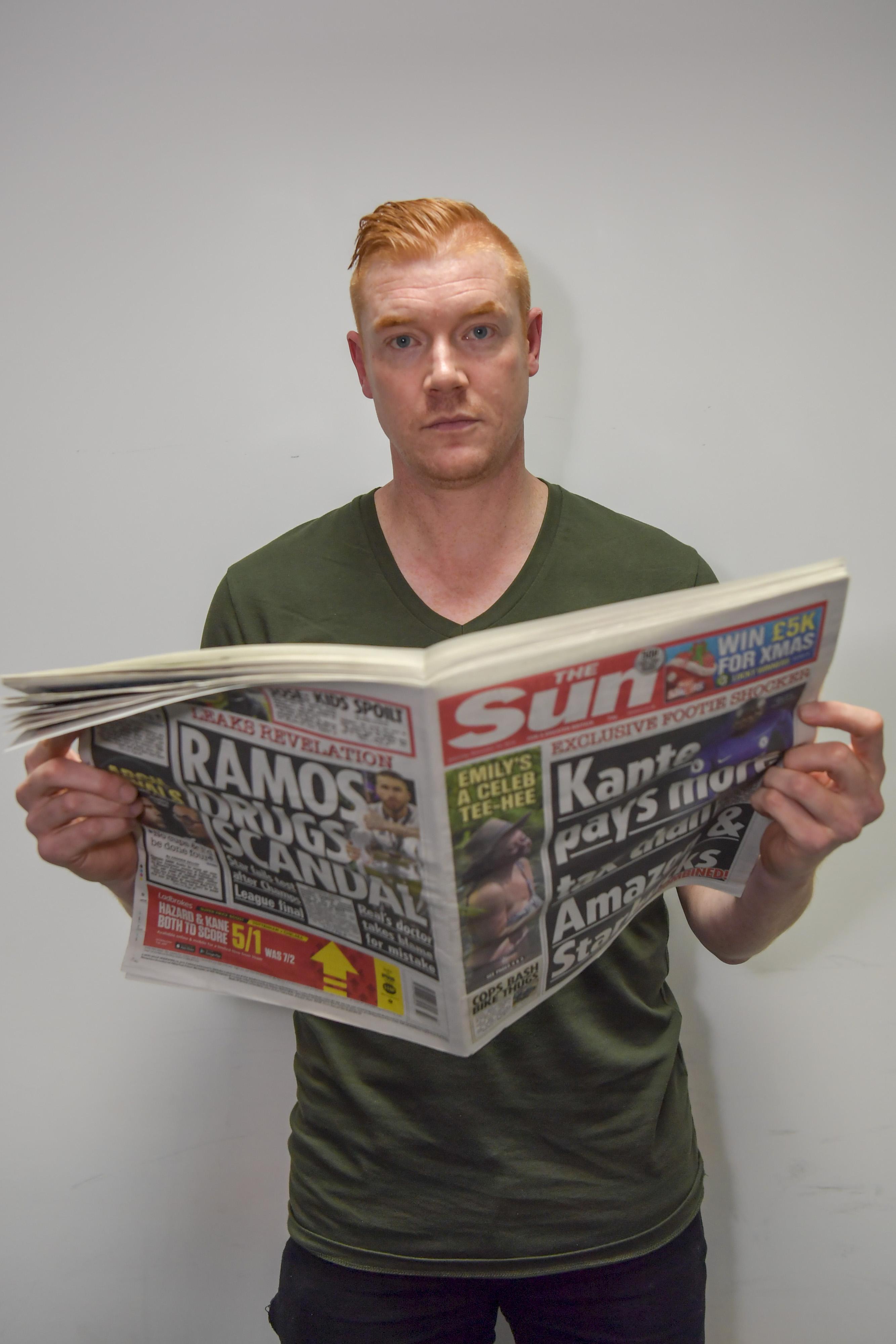 It was as if he was saying to me ‘I’m surprised that you would be a part of this’.

That’s how I felt. I didn’t know where to look, I was totally embarrassed.

Prior to that happening I was probably quite a tough footballer and a tough man. But, in that split second, Wenger gave me that look and I lost something inside of me.

I thought there is more to life than this. This was not the reason I became a footballer and I really didn’t want to be included in this or put my name to this.

I carried on for a bit after that but I just lost my stomach for it in the end. I would rather not be a footballer at all than have to play that way.

It was always Tony’s way or the highway. If you didn’t do it, you didn’t play and you didn’t train with the first team.

He completely ostracised me by getting me to go and train with the kids every day.

At one point it was myself, Andy Davies and Andrew Griffin.

Griffin was captain of the football club at that point and he just got completely disrespected and told to train with the kids.

So we made a pact that whenever we finished and walked past the first-team pitch, we would make sure someone cracked a joke to show that we were all laughing. To make it look as though he hadn’t broken us. We did that every day, making out as if we were happy to be there. 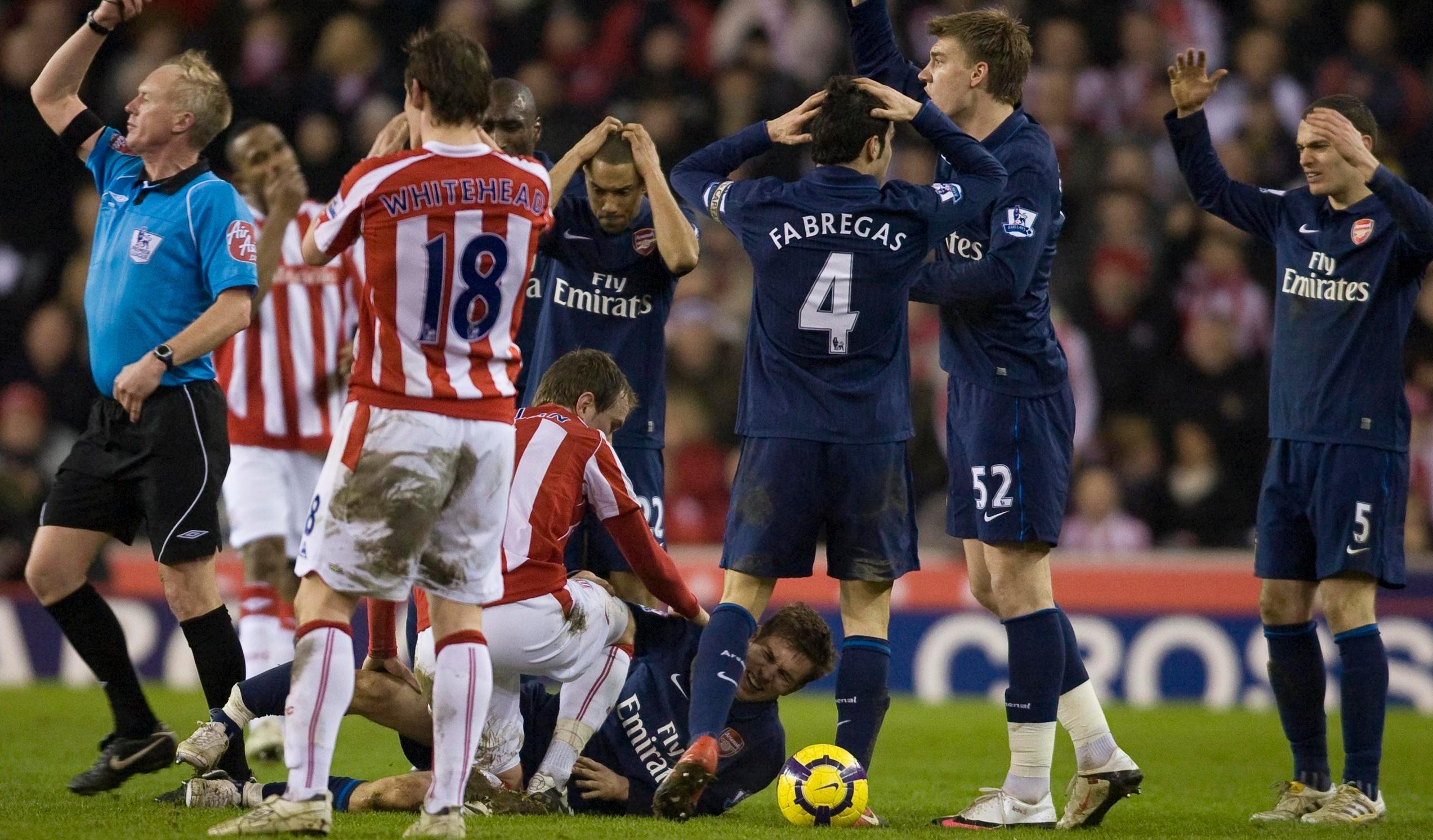 In hindsight I should have sat down with Tony after that Arsenal game and told him I wasn’t happy, but it wasn’t really something you did.

If you look at Pulis, he was successful. Success for Stoke City was staying in the Premier League and he achieved it.

So whatever you say about him, he was a successful manager for Stoke.

Nobody can deny that. He knows how to win football matches. He finds a way to win, that’s the mark of a good manager.

It’s just the way that he went about it, I didn’t want to be a part of it. 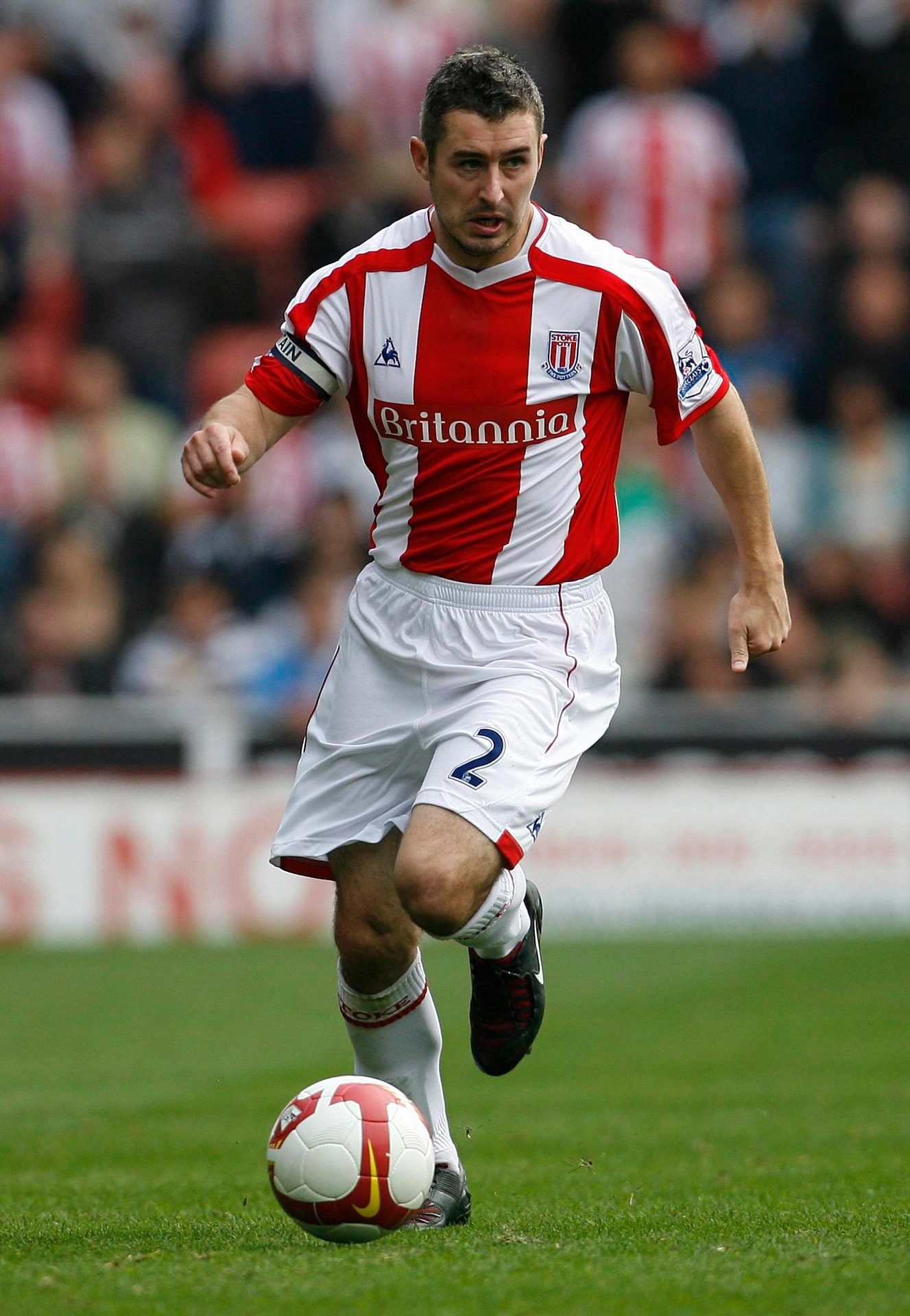 Related posts:
27/07/2019 Sport Comments Off on Aaron Ramsey's leg break at Stoke vs Arsenal was no surprise… Tony Pulis hated Arsene Wenger and we were totally out of control
Lifestyle