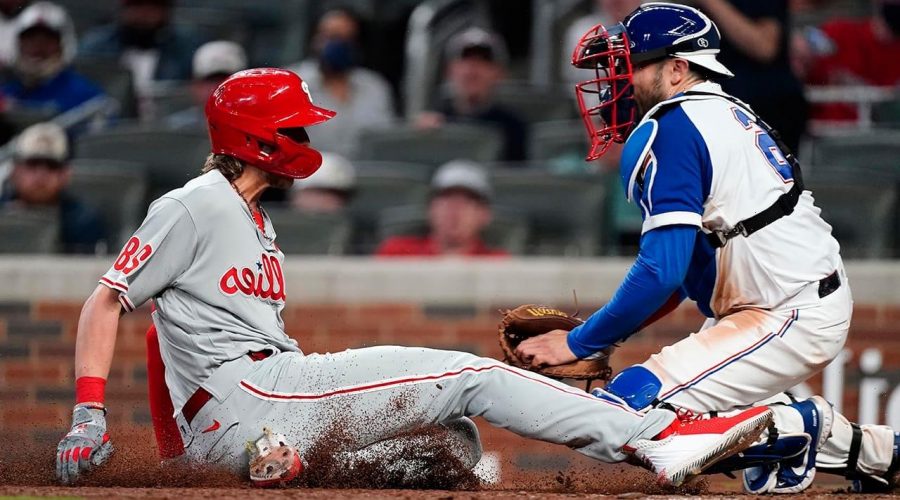 The Philadelphia Phillies managed to edge the Atlanta Braves in their early-season divisional matchup on Sunday night but the game didn’t end without some controversy.

Alec Bohm would score the game-winning run in the top of the ninth inning on a Didi Gregorius sacrifice fly. The play at the plate was the source of the drama.

Bohm was called safe at the plate. He appeared to beat a throw from Marcell Ozuna. The ball bounced twice before reaching Braves catcher Travis d’Arnaud. However, replays showed it appeared Bohm never touched home plate and d’Arnaud put the tag on him.

The play was reviewed and upheld, angering fans at Truist Park. Debris would then litter the field as fans showed their disdain for the call.

“I was called safe. That’s all that matters,” Bohm said after the game as Philadelphia won 7-6.

D’Arnaud insisted he got the tag on Bohm.

“A nice two-hop, hit me right in the chest. I leaned over, applied the tag, blocked the plate after I caught the ball. Initially, I didn’t know if he was safe or out just because I had to lunge to the right to make sure I blocked the plate, but after watching the replay it didn’t look like his foot touched the bag, from any angle we saw,” the catcher said.

“Afterward, I saw it from even more angles and it didn’t look like his foot touched the plate.”

Braves shortstop Dansby Swanson was displeased with fans throwing trash on the field.

“What happened after (the call) — I love this city. I love our fans. They’re passionate. They care. But what happened after they announced that call, that’s the most embarrassing part of the whole night. Not the call, but the reaction and the throwing of things on the field. Because No. 1, it’s disrespectful to the people who put in so much work to have the field ready for us every day to make sure it’s in the best shape possible. No. 2, endangering players. That’s incredibly disrespectful. It’s an embarrassing representation of our city because I know, being from here, that’s not how we act,” Swanson said, via the Atlanta Journal-Constitution.

“And then the worst part of it all, I don’t think people realize that we have families here. There are kids here. There are kids sitting in the front row and you have bottles whizzing by their heads. Just endangering kids who can’t protect themselves is downright embarrassing and it should never happen again. That’s honestly one of the real reasons I wanted to come in here, to say that. It needed to be said. It just can’t happen. It never needs to happen again.”

Philadelphia will hit the road to take on the New York Mets in a four-game series starting Monday night. Atlanta will host the Miami Marlins.