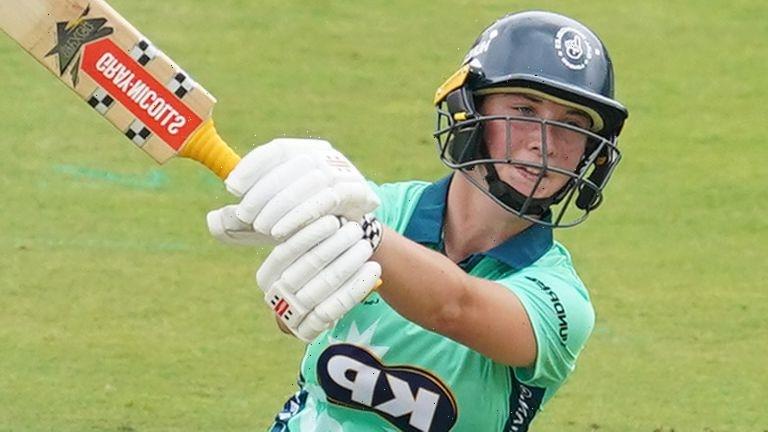 She is the 16-year-old who has taken The Hundred by storm – so is an England call-up the next goal for Oval Invincibles sensation Alice Capsey?

“England is definitely at the forefront of my mind,” Capsey told Sky Sports News, days out from scoring 59 from 41 balls, including 10 fours, in a breakout innings against London Spirit on her first appearance at Lord’s.

“I would love to have the opportunity to play for my country so I will be pushing to try and make any squads.”

For now, though, the batter – the youngest player in The Hundred – just wants to focus on performing at the crease and winning the inaugural edition of the tournament with Invincibles, who continue their campaign against Northern Superchargers on Saturday, live on Sky Sports from 2pm.

Capsey has benefitted from The Hundred being delayed by 12 months due to the coronavirus pandemic.

She was not selected for the 2020 competition but was then picked up for the tournament’s belated start in 2021 once former Surrey wicketkeeper Jonathan Batty became head coach.

Capsey was not sure she would be in the Invincibles XI but has now nailed down a place in it after he dazzling innings at the Home of Cricket, one she is still trying to take in.

“Did it take me by surprise? Absolutely. I could not have imagined playing that kind of game. I haven’t really processed it. Lord’s gives you a feeling inside that not many grounds other grounds really do.

“Walking through the Long Room the day before was incredible because of how historic it is. Then going out and batting, it doesn’t get much better than that.

“I don’t want to forget that day for a very long time. I have had a lot of messages but I have been able to put my phone aside and take some time for myself to try and remember it all.

“I always had in the back of my mind that I wanted to go quite far in cricket but I could never have imagined getting this far, so it has been surreal.

“I never imagined I would be playing. I thought I would be coming to watch some of the girls play, so it has snowballed quite quickly.

“I am happy I was able to contribute to a win so early in the competition and I just want to continue it through.”

16 yrs old .. What a player @AliceCapsey is now never mind is going to be .. #TheHundred

Capsey – who says Andrew Flintoff and Serena Williams are her sporting idols and that she has been inspired in her nascent cricketing career by Charlotte Edwards, Heather Knight and Tammy Beaumont – got the cricketing bug very young while watching her brother play.

Her rise up the ranks has been swift and despite feeling “out of her depth” when she played under-15 cricket at the age of 12, she was always determined “to see how far she could go.”

Capsey said: “I am so competitive. You can ask anyone in the dressing room. I am probably one of the most competitive ones. As soon as I step out on the cricket pitch, I am a different person.”

It has been a whirlwind week for the youngster, who turns 17 on August 11 – firing with the bat on Sunday morning after playing in the first-ever Hundred match on Thursday night.

Invincibles hosted Manchester Originals at The Kia Oval as the competition started with a standalone women’s game in front of a crowd of almost 7,400 people.

Capsey added of the occasion: “It was incredible, especially when we were going out to field with the fireworks. I think there were loads of pictures of all our faces like ‘wow, what are we playing in?’

“It was a great atmosphere, more than I think any of us really expected. It was great to be a part of. I was so thankful we were fielding first! I just tried to take it in and settle myself down.”

That was Capsey’s first game on the grand stage. There are plenty more to come.

28/07/2021 Sport Comments Off on Alice Capsey, 16, looking to build on 'surreal' week after starring in The Hundred
Lifestyle