As Tim Wendel scurried to the clubhouse at Phoenix Municipal Stadium, he carried the hopes of a new venture that could be viewed as both exhilarating and terrifying.

The idea of Baseball Weekly had been hatched just a few months earlier, in December 1990, when The Sporting News announced it would be dropping baseball box scores. Gannett executives John and Tom Curley saw an opportunity.

Most of you know what came next: A publication that would become an institution within the sport for not only its box scores, but its statistics, fantasy baseball coverage and in-depth player profiles. The first issue launched this month 30 years ago, with an on-sale date of April 4-11, 1991.

That was only a few months after the Curley brothers brought the idea of a weekly baseball-only publication before Gene Policinski, USA TODAY’s managing editor of sports. Policinski agreed, though he didn’t know whether it could become a reality by opening day.

“We had no idea of what it could be,” Wendel recalls. 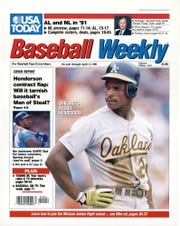 At the time, Wendel was more preoccupied with how he would pull off the first cover story. The cover had already been designed, with Rickey Henderson striking his familiar, cocksure pose. Henderson entered the 1991 season as arguably baseball’s best player, on the cusp of breaking Lou Brock’s career stolen base record.

One problem: That spring, Henderson had declared he wanted to renegotiate his contract. He blamed the media for the boos he was hearing from Arizona crowds.

Wendel didn’t realize the situation until he got to Arizona and ran into several writers he knew from his previous gig covering Bay Area baseball for the San Francisco Examiner.

“I’m saying, ‘Yeah, the first cover’s gonna be Rickey, so I’m gonna do Rickey,’ ” Wendel said, “and almost to a person, everybody I ran into went ‘Oooh, good luck with that. He’s not talking to anybody.’ And I’m going, ‘Uh oh.’ ”

When Henderson was pulled from a game in the middle innings, Wendel snuck away from the other writers in the press box and down to the clubhouse with his notebook in his back pocket. Once inside, he spotted Henderson coming around a corner with a towel around his waist. He tried to walk away as Wendel shouted, “Rickey!”

“I just want to talk about you and Brock’s all-time stolen base record,” Wendel told him, using “USA TODAY” as his publication.

Henderson talked, not just about Brock but about his upbringing in Oakland in which he would do extra sliding after games so he could come home with a dirty uniform so his mother would believe he had gone to the game. And about how, when he was in high school, he would race the team bus to strengthen his legs.

Carefully crafted stories after long sit-down interviews with players would become a staple in the magazine. Within months, Wendel found easy access to players and general managers in most places he visited, and framed covers hanging on the walls.

“There’s the guy who put me on the cover of Baseball Weekly,” Henderson said when he would spot Wendel.

Back in Arlington, Virginia, a staff of less than 20 put the issues together on Monday nights, pulling long shifts to make sure every detail was correct. Then and now, it has been a labor of love.

Paul White, who was baseball editor at USA TODAY, became the first editor of Baseball Weekly. The original publisher, Thomas Farrell, recommended the staff do an article just inside the issue that served as a welcome letter to readers. White had a wonderfully conversational style that explained the game in a well-informed yet light-hearted way.

And with that, the Leading Off column was born.

“We were able to create a feeling among readers that we were one of them and vice versa,” White mentioned around the time I began working on this publication in 2005. “We always heard that, especially when we were out in public.”

It’s been way too long since I’ve shared one of the coolest pics ever – Bob Dylan in a convenience store reading Baseball Weekly. 📷 by Ken Regan @bobdylanpic.twitter.com/QJeNlYGSTc

We know many of you began with us in those early days and have remained loyal throughout the years as we have evolved into Sports Weekly. (It was a necessity for our survival after baseball’s work stoppage in the mid-90s delivered what could have been a fatal blow.) We have learned of your passion for baseball – especially after an ill-fated decision to drop baseball stats for a spell – and other sports over the years through your emails and calls.

We learned even more about you a little over a year ago, when a pandemic shut down sports and we continued to publish. Yes, you love those stats, but the in-depth stories still matter, too, especially when they can take you away from what is going on in the world.

“The toughest of times right now, but I want to commend you and your writers for the excellent articles we're getting in Sports Weekly!” Al Walker of Genoa, Illinois, wrote. “I just finished the April 15 issue and that issue had article after article of writing excellence!

“Dan Wolken's writing on expanding the college playoffs was one of the best written pieces I've read in Sports Weekly! And of course it was great to read Mark Medina on my beloved (Chicago) Bulls of the 90s! Even a short article like Mike Brehm's on the loss of Colby Cave (a hockey player who died at 25 after having a brain bleed) was something we didn't get anywhere else. And of course, there's always the excellence in the writing of your stalwarts, Nancy Armour and (Bob) Nightingale!

“Tough times, but what a damn fine paper you folks are putting out! Keep that up, you guys! We need it!”

It’s a tribute to you and your commitment to our publication that such stories and columns and other components that once comprised Baseball Weekly still exist today. They include those stats, box scores for baseball and other sports, a fantasy presence and in-season baseball notes on every team.

Back in those precarious early days, Wendel, the American League writer, and Rob Rains, the NL guy, wrote the notes themselves. A network of freelance writers, one for each team, was quickly developed to streamline the process. One of them, based in Southern California, was Nightengale.

“He was nails. I could always count on him,” Wendel recalls. “I remember being adamant, ‘We gotta hang onto Bob.’ And now I read his stuff and go, ‘Yes!’ ” 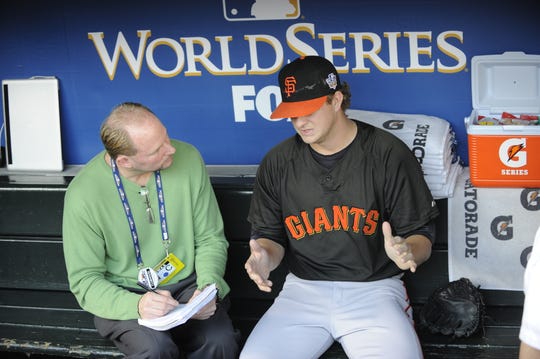 I got my start in September 2005 editing White, Nightengale and Steve DiMeglio, now one of our stalwarts at Golfweek. I learned so much about our publication, and the heart that went into it, from all of them. I feel that same passion from all of you.

“I just wanted to thank you for the March 31 issue of Sports Weekly and the great coverage of MLB 2021,” Patrick Sheahan wrote me from Hamilton, Ontario. “It was a real bonus to have the team schedules included. It has been tough to see sports coverage shrink … but I was pleased to see that you aced the new baseball season with this issue.”

Borelli is the editor of USA TODAY Sports Weekly. To subscribe, go to mysportsweekly.com