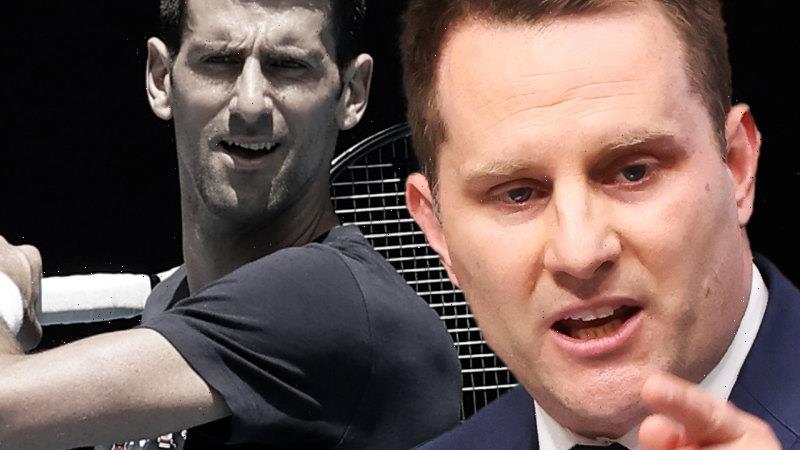 The Australian government says the presence of Novak Djokovic throughout the two weeks of the Australian Open may put lives and civil order at risk by increasing anti-vax sentiment and disregard for COVID-19 rules.

In a radical reframing of the case against the Serbian tennis star, Immigration Minister Alex Hawke concedes the unvaccinated Djokovic entered Australia with a valid medical exemption and poses a low risk of contracting the virus while in Australia and passing it on to others due to his recent infection. 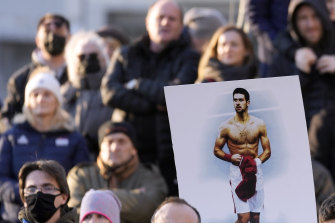 Novak Djokovic supporters gathered in a Belgrade street after his visa was cancelled by the Australian government.Credit:AP

The furious debate that had engulfed Djokovic for the past 10 days – whether a recent bout of COVID-19 provided him with a genuine exemption to travel to Australia without being vaccinated – has been abandoned by the government without Mr Hawke even reading Djokovic’s extensive submissions on the question.

Instead, the case is now headed to the Federal Court and will be argued on dramatically new grounds at a public hearing before Justice David O’Callaghan at 10.15am Saturday.

Mr Hawke’s detailed reasons for his decision to cancel Djokovic’s visa for a second time since his arrival in Australia late on January 5, revealed by the Herald and The Age, portray the nine-time Australian Open winner as a menace to both public health and public order.

The minister describes Djokovic as a “high profile unvaccinated individual” who has publicly indicated his opposition to getting the jab and demonstrated an “apparent disregard” for basic COVID rules such as isolating after a positive test.

“Given Mr Djokovic’s high-profile status and position as a role model in the sporting and broader community, his ongoing presence in Australia may foster similar disregard for the precautionary requirements following receipt of a positive COVID-19 test in Australia,” Mr Hawke wrote.

“In particular, his behaviour may encourage or influence others to emulate his prior conduct and fail to comply with appropriate health measures following a positive COVID-19 test, which itself could lead to the transmission of the disease and serious risk to their health and others.”

Explaining how a 34-year-old visiting tennis player could be a risk to public order, Mr Hawke argues that when case numbers are rising in Australia due to the spread of the Omicron variant, influential persons and role models who show a disregard for public health measures have the potential to undermine the pandemic response of federal, state and territory governments.

Referring to Djokovic’s admission this week that he attended a media interview and photo shoot in Serbia on December 18, a day after he received confirmation of his positive COVID status, Mr Hawke said: “Mr Djokovic is such a person of influence and status. Having regard to the matters set out above regarding Mr Djokovic’s conduct after receiving a positive COVID-19 result, his publicly stated views, as well as his unvaccinated status, I consider that his ongoing presence in Australia may encourage other people to disregard or act inconsistently with public health advice and polices in Australia.

“In addition, I consider that Mr Djokovic’s ongoing presence in Australia may lead to an increase in anti-vaccination sentiment generated in the Australian community, potentially leading to an increase in civil unrest of the kind previously experienced in Australia with rallies and protests which may themselves be a source of community transmission.”

The minister concluded: “These matters go to the very preservation of life and health of many members of the general community and further are crucial to the maintaining the health system in Australia, which is facing increasing strain in the current circumstances of the pandemic.”

To successfully defend his decision under the Migration Act, the minister doesn’t need to prove that any of this has or will occur, only that it may unless Djokovic is deported back to Serbia.

The broad charge is that Djokovic, so long as he remains in Melbourne, could become the pin-up boy for a hardcore anti-vax movement that has already staged mass rallies in capital cities and infiltrated the union movement and political parties on the fringe of national affairs. This in turn could lead to a breakdown in observance of public health rules and more illness from COVID, hospital admissions and ultimately, deaths.

Yet, in the same document, the minister acknowledged that Djokovic has not attempted to break any Australian laws and was a “person of good standing” known for his philanthropy.

Counsel for Djokovic, Nicholas Wood, SC, during a preliminary hearing before Federal Circuit Court Judge Anthony Kelly late on Friday night, described the minister’s reasons as “starkly different” from those cited by border officials at Melbourne Airport when they initially cancelled Djokovic’s visa and placed him into immigration detention.

“What the minister does is in substance to assume in Mr Djokovic’s favour every single fact that might have been an issue previously,” Mr Wood said. “The minister finds and assumes that Mr Djokovic has in respect complied with the law.” 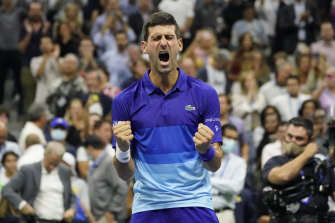 Mr Wood said the flaw in the minister’s approach was that, in considering whether Djokovic’s ongoing presence in Melbourne will stir up anti-vax sentiment, he gave no consideration to what deporting Djokovic will do.

He submitted that the implications of deportation would be profound for Djokovic.

“Cancellation leads to the forcible, mandatory removal of this man of good standing who has a medical contraindication to a vaccine, who has complied with law, who poses a negligible risk to others, being forced out of Australia and being subjected to provisions in the act and regulation that would then preclude him from coming back to Australia for the next three years subject to the possibility of a waiver being exercised."⁣

Counsel for the federal Immigration Department, Stephen Lloyd SC, agreed that the case Judge Kelly decided at the start of the week bore no relation to the matters now before the court.

The minister’s full reasons for moving against Djokovic remain tightly held. Once they become widely known, the reaction among his supporters both here and in Serbia is likely to be febrile.

Shortly after Djokovic was first taken into detention, his father Srdjan declared: “Australia has become a dystopia, a mockery of the free world, they treat Novak Djokovic, my son, your world champion, as a political prisoner. As a terrorist in Guantanamo Bay.

“They deprive him of the right to play, to individuality, to freedom of opinion.”

Djokovic is back in detention today, his meetings with lawyers shadowed by two Border Force guards. Whether he can again walk freely in Australia for the forseeable future – much less play tennis here – will be determined by a Federal Court hearing on Sunday.