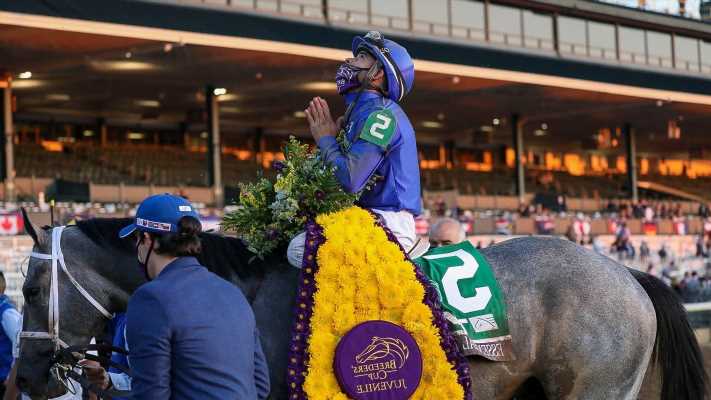 Essential Quality, who finished fourth as the favorite in the Kentucky Derby, is the 2-1 morning-line favorite for Saturday’s $1.5 million Belmont.

Trained by Louisville native Brad Cox, Essential Quality drew the No. 2 post position in a field of eight for the Belmont. Post time is set for 6:49 p.m. Saturday, and the race will be televised by NBC.

Cox said he’s been impressed with Essential Quality’s workouts at Churchill Downs since the Kentucky Derby – including a bullet five-furlong breeze in 59.40 seconds on Saturday – and is confident the son of Tapit will prosper at the 1 ½-mile Belmont distance. 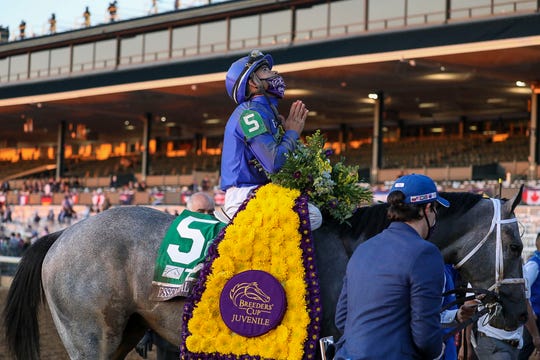 “(Jockey Luis Saez) has always had a lot of confidence in him that distance would never really be an issue with him,” Cox said. “Tapit has had three winners of the Belmont, so we’re definitely hopeful (Essential Quality) can add to Tapit’s legacy.”

Preakness winner Rombauer drew the No. 3 post position and is the second choice in the morning line at 3-1 odds.

YOU MAY ALSO LIKE:  Owner looks to tweak Baffert with 'Bad Test Bob'

Essential Quality is one of five horses who competed in the Kentucky Derby and are coming back for the Belmont, joining Hot Rod Charlie (third in Derby), Known Agenda (ninth), Bourbonic (13th) and Rock Your World (17th).

Overtook, trained by Todd Pletcher, is the only horse in the Belmont field who hasn’t already competed in a Triple Crown race. He enters off a third-place finish in the Grade 3 Peter Pan on May 8 at Belmont.

Rebel’s Romance, winner of the UAE Derby on March 27, had been pointed toward the Belmont but was withdrawn from consideration Tuesday morning. Godolphin, which owns Rebel’s Romance, announced the colt has an infection in a hind leg.

“We hope this is only a minor setback, and we look forward to seeing him back on the racecourse in the near future,” Godolphin wrote on Twitter.

Coverage from Belmont Park begins at 3 p.m. ET on NBCSN and from 5 to 7 p.m. on NBCSports.com.

Odds for the field

Rock Your World: The thought held by some that the Belmont's 1 ½ mile distance favors closers is nonsense. Usually, the pace in the Belmont is not fast and is more conducive to front runners or those who are close to the pace. Having said that, Rock Your World deserves another chance after a no-chance trip in the Kentucky Derby. He was off slow and then was bumped and squeezed by Essential Quality and Highly Motivated shortly after while jockey Joel Rosario’s right foot came out of the stirrups.  Throw the race out. In the Santa Anita Derby, Rock Your World wired a field that included current Kentucky Derby winner Medina Spirit. Expect him to go to the front and, being a son of 2003 Pacific Classic winner Candy Ride and with 2003 Belmont winner Empire Maker on the dam side, he should get the distance.

Essential Quality: He was unbeaten until he finished fourth, beaten a length, as the 5-2 favorite in the Kentucky Derby. Out of the top four finishers, Medina Spirit, who led wire to wire, runner-up Mandaloun, who saved ground on the backstretch and third-place finisher Hot Rod Charlie, who was in the two path down the backstretch, Essential Quality had by far the most difficult trip. He had the bumping with Rock Your World at the start and was five-wide on the first turn, backstretch and far turn and four-wide in the stretch. He should be close to the pace, and being a son of distance-loving sire Tapit helps too.

Known Agenda: The Florida Derby winner drew the dreaded rail post in the Kentucky Derby and then got shuffled back and boxed in while finishing a non-threatening ninth. However, it is Hall of Fame trainer Todd Pletcher in the Belmont. Pletcher – he's had tremendous success in this race and is never to be discounted. Known Agenda being a son of two-time Horse of the Year Curlin does not hurt, either.

Hot Rod Charlie: The son of 2013 Preakness winner Oxbow has been solid in his last five races with two wins, including the Grade 2 Louisiana Derby, a second in the Breeders’ Cup Juvenile and a third in the Kentucky Derby. He has enough speed to be near the pace. He wired the field in the Louisiana Derby and was not far off it in the Derby. Only knock on him is he doesn’t seem to pass horses in the stretch. He had dead aim on Medina Spirit and Mandaloun at the top of the stretch in the Derby and could not get by.

Essential Quality: While Essential Quality suffered the first loss of his career in the Kentucky Derby, it was a heck of a fourth-place finish for a runner who got bumped at the start and was hung wide at Churchill Downs. Bad trips aren’t really a factor in the 12- furlong Belmont, around the track’s sweeping turns. Coming off a five-week refresher, it’s difficult to imagine Essential Quality not being a factor as the wire approaches. And he’s a son of Tapit, who sired 2017 Belmont winner Tapwrit.

Known Agenda: It’s not a bad idea to simply throw the Kentucky Derby out for some horses, and Known Agenda looks like one of them. Instead, focus on the come-from-behind victory in the Florida Derby. He won that race impressively, and he’s a son of Curlin, who ran second in the 2007 Belmont and sired 2013 Belmont winner Palace Malaice.

Rombauer: It’s OK if you think you need to see more from Rombauer, but I think we all saw enough in the Preakness to think he’s going to be part of the exotics here. He came from off the pace to chase down the leaders, earning a 102 Beyer Speed Figure. Whether or not he can rebound three weeks later remains a question.

Rock Your World: Expect the Santa Anita Derby winner to be on the lead. And while his slow start cost him a chance in the Kentucky Derby, if he’s on the front end he’s got a chance to hold on and be a factor in the stretch.

Essential Quality: This is one of five horses going from the Kentucky Derby straight to the Belmont Stakes, a sensible five-week spacing. What's not to like about last year's 2-year-old champion? He ran well despite a troubled Derby trip and trainer Brad Cox says, "I definitely think he’s moved forward from the Kentucky Derby, I really, really do.” I'm sold.

Hot Rod Charlie: 94-1 when second to Essential Quality in the Breeders' Cup Juvenile. It took four tries for the Oxbow colt to break his maiden but he's been stellar ever since.

Rock Your World: Everything went wrong for the Santa Anita Derby winner at Churchill Downs. Expecting to see better handling from Joel Rosario but wish Umberto Rispoli had regained the ride.