Andrew Bogut says he is "hurt" and still "obviously disappointed" about Australia's exit from the World Cup but is excited for the upcoming NBL season with a number of new faces joining him at the Sydney Kings.

Bogut said he had taken a little time off after the World Cup to refresh before he got back into pre-season training with the Kings. 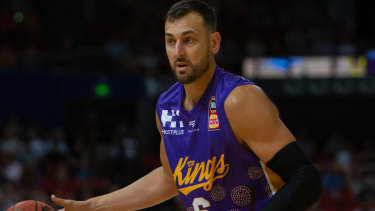 "I had four days with the family. I just got away … but it still hurts today the way it all ended and it was obviously disappointing," Bogut said.

The Boomers fell just short of reaching the World Cup final losing 95-88 in double overtime to Spain in the semi-final and the centre said it was disappointing to be having the same conversation as after the Rio Olympics, where the Boomers also lost to Spain.

"It's something for us to build on, we didn't have our full-strength team that we could have had so there are some positives going into Tokyo," Bogut said.

The Boomers finished fourth at the World Cup in China after also losing the bronze play-off final to France and Bogut said he was still waiting to hear back from the international federation FIBA on a possible punishment after he launched a foul-mouthed tirade after the Boomers' exit.

"I've done what I can with FIBA. I'm waiting to hear back from them," he said.

Domestically Bogut tipped the Sydney Kings to have a good year due to the acquisition of a number of key players, including Casper Ware Jr from Melbourne who he said he was excited to play with.

"He was always a tough match-up for us in the regular season one of few two-way guards who can get you 30 [points] and keep a guy under 10," Bogut said at the launch of the Kings' NBL season at the Auburn Basketball Centre in Sydney. 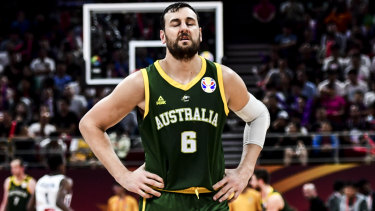 Andrew Bogut could still face sanctions while the Australians try to regroup from their World Cup disappointment.Credit:Getty Images

Bogut said he was on track to play in the season opener against the Cairns Taipans on Friday despite an ankle injury picked up at the World Cup.

"It was just a little bit of bad luck but I anticipate getting through the whole game unscathed," he said.