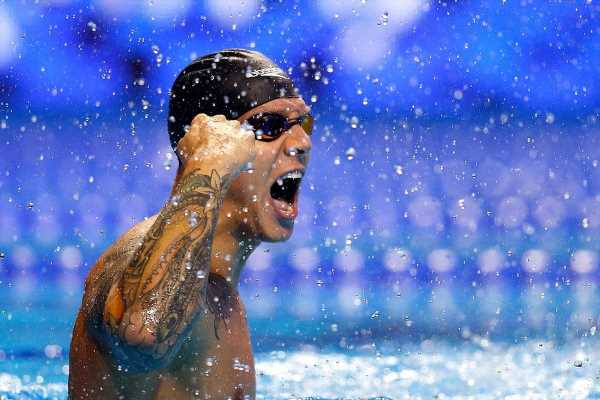 U.S. and Olympic gold winner Dressel excited to be back in pool ahead of Tokyo

He is the fastest swimmer in the world and set to become the sport’s biggest star since Michael Phelps.

Sprint sensation Caeleb Dressel, 24, could become just the fourth swimmer in history to win seven medals in a single games when he leads Team USA in the pool at the Tokyo Games.

The two-time Olympic champion and 13-time World Champion was the first American to break 40-seconds in the 100m freestyle and holds eight other American records.

Michael Phelps won eight golds in eight events at the 2008 Beijing Olympics, eclipsing the seven golds won by Mark Spitz at the Munich Games in 1972.

Dressel won eight medals, including six golds, at the 2019 World Championships, as well as seven he claimed at the 2017 event.

When the 2020 Games were delayed a year by the Covid-19 pandemic, Dressel stepped away from the pool and hiked part of the Appalachian trail with family members.

“Olympic Games was a great experience, don’t get me wrong, but it wasn’t a life-changing experience,” Dressel said on The Ben and Caeleb Show podcast he co-hosts.

“I feel like I learned a lot more about myself, my family and everything going on around me more on the trail than I did with the Olympic Games.”

When he finished the hike he says he threw-out non-essential possessions and cut down on using his phone.

“I’m at the point now to where I don’t remember where I put my phone because I don’t use it that much,” he said.

Dressel, who is 6ft 3, has been described as a reluctant superstar and admits he has no interest in fame or the spotlight.

“I’ve never been a fan of media stuff, I’m sorry. If it were up to me, it would be me, the water, my training, coach Troy and my team-mates, and that’s it. I don’t want to be famous,” he has previously said.

Dressel married his high school sweetheart Meghan Haila on Valentine’s Day, but admits he did not even miss a single practice to tie the knot, despite being given time off by his coaches.

The Florida-based couple both swam for the Bolles School Sharks club team and announced their engagement in November 2019.

Dressel, who was born in the Sunshine State just days after the closing ceremony of the Atlanta Games in 1996, will compete in the 50m and 100m freestyle and 100m butterfly, in which he will be the favorite in each race, and may take part in up to four relay events.

He won two relay gold medals in Rio in 2016, while still a 19-year-old student at the University of Florida, and came sixth in the 100m freestyle.

Dressel only decided to concentrate on swimming full-time at the age of 12 when he game up American Football.

It paid off quickly and at the 2011 Junior National Championships in California, breaking the boy’s 13-14 national age group record in the 50m freestyle.

And in 2012 USA Swimming Winter Nationals he became the first swimmer under 16 to break 20 seconds in the 200-yard freestyle relay.

Dressel has been described by Australian Olympic great Ian Thorpe as the “best male athlete” since Michael Phelps.

31/07/2021 Sport Comments Off on Caeleb Dressel: Who is the Olympic gold-medallist swimming for Team USA?
Lifestyle