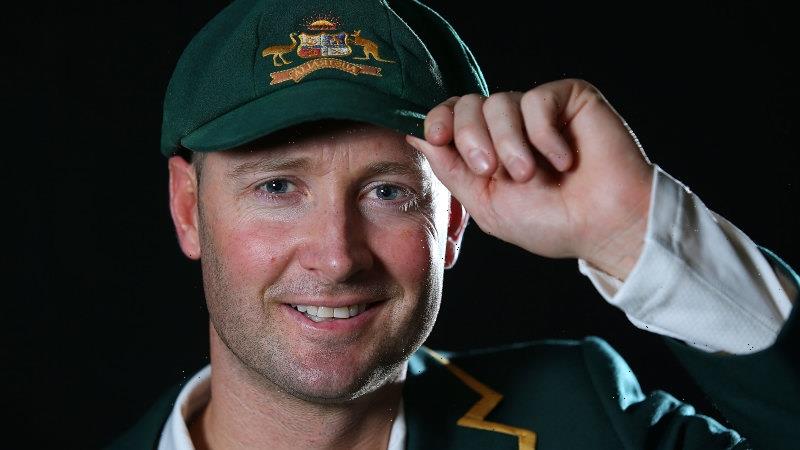 The erstwhile Australian cricket captain Michael Clarke has been more than forthright in his media comments this week, essentially saying that, of course, all the players in Cape Town knew that the ball was doctored before Sandpapergate blew up and it was ludicrous to maintain anything else. His reward has been no little blowback in return, much of it from contemporary cricketers muttering he should shut the hell up. 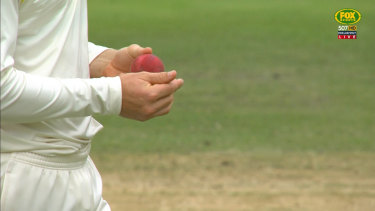 But a piece of reminiscence in The Guardian this week plays to Clarke’s position at first slip. See, a couple of decades ago, when one Howard Wilkinson was manager of the English soccer team, his side had just come off the pitch after a singularly underwhelming performance, whereupon in the post-match press conference the assembled press pack were more than merely pointed in their questions.

Drawing himself up, the Guardian recounts, Wilkinson “questioned the credentials of the assembled and relied on the old chestnut of asking how many caps they had won”.

It was at this point that a voice piped up from the back of the room: “Forty three, Howard, and 15 as captain.”

It was Jimmy Armfield, one of England’s great players now working as a commentator.

In the case of Clarke, I would have thought that, outside the team itself, he would have a fair idea as to what happened. I was doing Sports Sunday with him on the morning the story broke and will never forget how profoundly shocked and disappointed he was that things had so suddenly descended to that level.

Get with the swing

Truly, though? Truly, you shouldn’t need to have Clarke’s expertise and experience to see what’s most likely happened here. The idea that three batsmen in a bubble got the ball roughed up to help the bowlers without them knowing about it – the whole idea of the exercise was so they could get reverse swing – is so unlikely that I can’t take it seriously.

The only reason the story came to light in the first place was because the former South African Test fast bowler Fanie de Villiers, working as a commentator, noticed the ball reverse-swinging from early in the innings and so prepped up the cameramen to follow the ball closely to see what was happening to it. Helloooo, Cameron Bancroft!

And that’s where the trouble started . . . 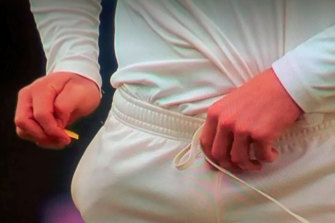 So for the bowlers to be correct in their Sergeant Schulz stance of “We knew nussink”, it does seem more than passing odd that, while de Villiers could spot it from the commentary booth, the men actually benefiting from the cheat had no clue!

Against all that is the concept of “taking one for the team”. No matter who knew what and when, three blokes – Steve Smith, David Warner and Cameron Bancroft – have already taken one for the team, been rightly publicly hung, drawn and quartered for cheating in Cape Town and will have “Sandpapergate” chiselled on their tombstones.

Revisiting the whole thing from a justice point of view now seems too late, and beside the point, offering a sacrifice to the cricket gods when those sacrifices have already been offered. The actual time for Bancroft to speak up if he was going to was at the time.

Tearing the scab off the wound now, to bleed across the back pages of newspapers throughout the cricketing world, seemed to have no upside whatsoever, bar for the postman who delivers to the Bancroft household as he will have to lug very few Christmas cards this year.

The buzz in the air! The chitter-chatter!

Honestly, I haven’t truly heard it in an Australian rugby gathering since the start of our Great Depression, circa 2016. But on Thursday evening on the top floor of the Museum of Contemporary Art, it truly felt like we were coming out the other side as Rugby Australia launched its bid to host the 2027 World Cup. 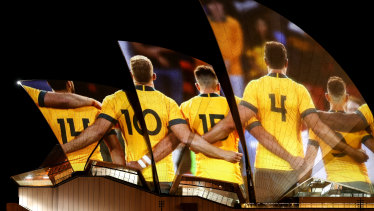 Sydney Opera House was lit up with images of the Wallabies as part of Australia’s 2027 Rugby World Cup bid launch on Thursday night.Credit:Getty

Graduates of the Sydney Uni college system will remember just what a big deal the male sporting competition of the Rawson Cup is, and last year the Rawson Cup Final was the biggest event held on the campus.

This year there will be something new under the sun, and it’s not just that the curtain-raiser to the Rawson Cup Final will be the final of the Inter-College Women’s 7s rugby tournament. It is the extraordinary level of interest there has been from the Sydney Uni college females to play in it.

This Sunday from noon at St John’s Oval. no fewer than 140 women from the colleges will compete to play in that final this Wednesday night at USyd football ground – which you and I used to know as No.2 Oval.

Former Test referee Wayne Erickson, who is the rincipal of St Andrews College, recognises the significance of it: “It has been amazing. No one saw it coming to this extent. This year has seen an explosion in interest from college women wanting to be involved in rugby – in many cases for the first time in their lives – and it is wonderful.”

Indeed. And wait till the Wesley women get a hold of the rest of them. They are a strong breed, trust me.

Johnathan Thurston decrying the fact that no fewer than eight players were sin-binned in two games on the opening night of Magic Round: “Come on, this is rugby league.” There was more to come and, by the end of the round, there had been 14 sin-bins and three send-offs as the NRL finally did what it had do and cracked down on all play that risked cracking heads. 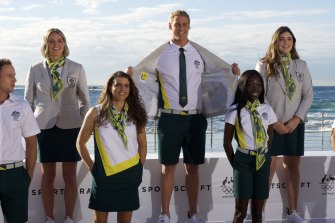 Members of the Australian Olympic Team unveil the opening and closing ceremonies  uniform for the 2021 Tokyo games at Wylie’s baths.Credit:Nick Moir

A North Melbourne player before the team song after they finally won a game, their first of the season: “How does it start?”

Richmond coach Damien Hardwick on playing home games at Marvel Stadium: “Mate, I hate coming here. I probably shouldn’t say that. The MCG has got soul, it’s got Richmond people there. Our people don’t come here. Plain and simple. I’d love them to come, but the fact of the matter is I can’t drive them all here.” 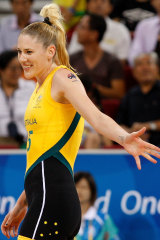 Venus Williams given a time violation during a windy time that prevented her from serving: “I’m just saying that wind blows and there is nothing I can do about that. I can’t control God. Talk to him.”

Team of the Week

Lauren Jackson (pictured) Became the first Australian player to be inducted into the American Basketball Hall of Fame.

Zali Steggall The independent MP for Warrringah did the UTA100 Ultra Marathon through the Blue Mountains last weekend, getting through 100km of bush track. She started at 6.30 am on Saturday and finished at 3.24am on Sunday morning. Bravo.

Kaylee McKeown The Australian swimmer is emerging as one to watch at the Tokyo Olympics, on the reckoning that they do indeed take place.

Richard Bland Though twenty years in the making, 48-year-old English golfer finally won on the European Tour at the 478th attempt. Let me hear you say RAH!

Barcelona Won the Women’s Champions League with a 4-0 demolition of Sam Kerr’s Chelsea.