WHAT a couple of weeks there is coming up on the Flat.

Ascot, Lingfield, Newbury and York all feed into Epsom. But first up, there's the small matter of the Boodles May Festival at Chester. 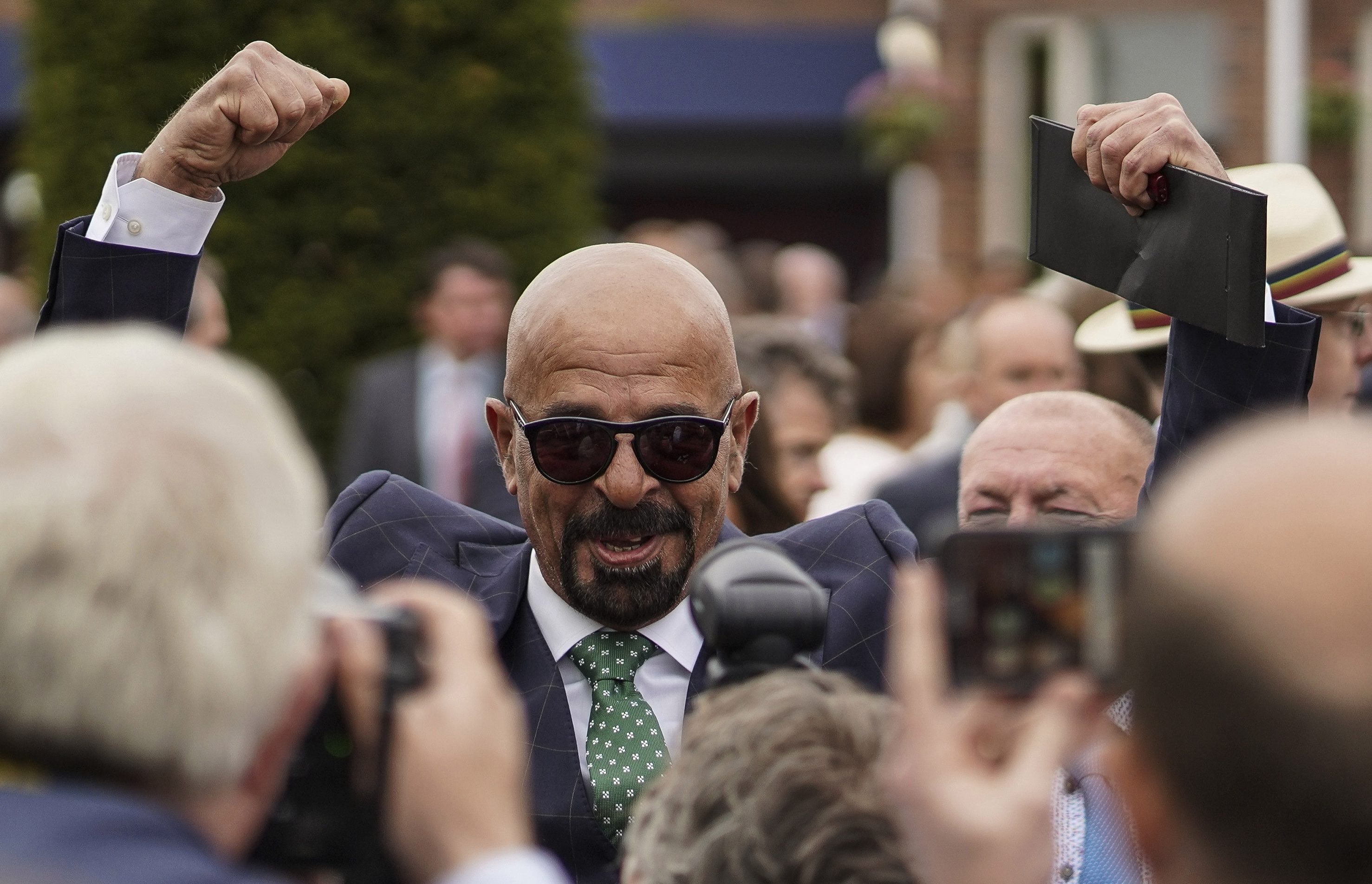 A wide-open juvenile race to get the ball rolling. It's easy to make a case for a number of these speedballs.

This is far from a race to go wild on and the majority of those with the best form in the book are stuck out wide.

Take the Brocklesby winner Show Me Show Me, drawn out in Stall 8, and Electric Ladyland, even worse off for Archie Watson in 10.

Had either of those been drawn lower they would likely be standout picks. Then again, they would also be plenty shorter in the betting.

It's probably a race to keep your powder dry in, until late in the day when a couple might have been backed in the market. That's about as informative as you'll get for now.

Of those drawn better, IVA REFLECTION looks one of the stronger prospects.

He won on his first start at Doncaster, and despite a bunched finish, was hardly asked for a thing by Jane Elliott and still showed a brilliant attitude to get the job done.

He would have learnt plenty from that battle and should benefit from that with the likely hustle and bustle here.

Great Dame improved no end to win at Ripon on his second start and she races off a low weight from Stall 3.

Won by Enable and Magic Wand in the last two renewals, this race has an illustrious roll of honour.

On paper the 2019 running looks up against it if trying to throw up a horse capable of reaching those heights. But we'll have to give them a chance first…

The one I like is Aidan O'Brien's SECRET THOUGHTS who steps markedly up in trip.

She really caught the eye on her comeback at Leopardstown, when loads went wrong.

She was caught four or five wide throughout, giving length after length away to impressive winner Lady Kaya who has since trumped the form in the 1000 Guineas.

On breeding she has every right to have a crack at this trip and I think she'll come into her own now as a three-year-old.

It's hard to ignore the claims of early favourite Manuela De Vega. A late start to her juvenile career had no effect as she romped to two wins from two including a Listed win.

She carries a 3lbs penalty here and the concern is the lack of a run, as well as Ralph Beckett making a slow start to the year and admitting she'll need a run. At the prices I can leave her alone.

Mark Johnston's Vivid Diamond makes appeal at bigger prices. She looks to have gone under the radar here despite her Listed second.

She's drawn well and Franny Norton is back in the saddle, with conditions set to suit as well.

Another fiercely competitive heat on the Roodee here. A flying five furlong handicap, with the usual names holding big hands.

The one I like is ANGEL ALEXANDER who looks nicely treated on his handicap debut.

He gets heaps of weight from his market rivals and showed enough in three starts at two to suggest he has a future as a decent sprinter.

Tom Dascombe will have saved this three-year-old for this and the draw in two is absolutely perfect.

Top Breeze should have more in the locker for Richard Hughes in his hat-trick bid.

A mark of 92 is far from a gimme in a heat such as this but a combination of a good draw and Hughes's start to the season probably make him the deserved favourite.

Dave Dexter looks criminally over-priced with rain forecast to fall early Wednesday and throughout the morning.

He had a busy juvenile season, but if you take his last run out in October he'd be plenty shorter here and returns to a track he's gone well at before.

The draw is a slight worry in nine, but there's plenty of pace on and he's always been seen best as a hold up horse anyway.

A proper Derby Trial up next. There is a few in here that will be hoping to throw their hat into the Epsom ring.

More dreams will be dashed than created, but KING OTTOKAR looks the one to be with in this Group 3.

He's always been a horse trainer Charlie Fellowes has liked, and burst onto the scene with a taking win at Newbury last time out.

It was soft ground that day and he powered through the line like this extra distance will help eek out more ability.

The form is still to be tested properly, but he won fair and square that day and looks a fair price to continue his progress.

Aidan O'Brien farms this race and it is hard to ignore his runners as always in a race he's won every running of since 2013 up until last spring.

Norway is shortest of his in the betting, but at a juicy price I quite like the look of Gentile Bellini.

Beautifully bred, he's another that should come into his own the further he gets and the more experience he gains.

Technician will be there or there abouts, but the Martyn Meade stable form is a concern and at the prices I can't have.

Kaloor looks a massive price after his staying on third behind King Ottokar last time.

A three-year-old maiden that I'll be steering clear of on the whole. It's hard to be overly confident on anything in here.

MONS STAR arguably has the best form in the book and did plenty wrong when making his debut. He get VERY worked up in the parade ring, and if he can keep his mind on the race at hand should be hard to beat.

Sneaky Peek has a very similar profile to Mons Star and showed plenty on debut at Newbury. A bit of market confidence could prove important before the off for the Andrew Balding team who do well at Chester.

Faylaq should have more to offer at three and the William Haggas team are finally starting to find some form with their runners.

Another handicap sprint and the usual Chester puzzle needs solving. Can you risk a horse drawn high?

Thankfully the one for me in this is drawn in stall three. WILD EDRIC has run his best at Chester and should be primed for a massive effort here.

He ran well on his reappearance at Pontefract and any rain in the lead up to the off will be more than welcome.

Importantly, he's always shown himself to be quick out of the stalls and is probably why his best efforts have come at this very track.

Pass The Gin is another I like in this. He's versatile on the ground and this drop back in grade could really tell as Andrew Balding and Oisin Murphy team up again.

The draw is a worry (sorry I keep mentioning the draw, but it's bloody important here) but is probably why he'e the price he is and I can take the gamble.

Balding does well here, and it continually goes under the radar.

Chapelli will be bang there but is very, very short in a race like this.

A pretty low-key race to finish up with and I have no strong fancy in it.

I keep getting drawn to ROBERO though, who looks to have plenty in his favour when you dive into his form.

He has plenty of back form and showed that over the winter with a string of good runs on the all weather.

He's yet to show that on turf for current connections, but is back to his last winning mark, drawn well and has top Chester jock David Probert on board. He looks a big price.

Air Raid has been tricky to keep on song, you only have to look at his form to judge he's had his fair share of problems.

However, he's the kind of horse Jedd O'Keeffe does well with and another wind-op may have done the trick this time around. He's shown enough in his few starts to suggest he can go on a decent run in handicaps.

Any market support and he could be mighty interesting indeed.

Gossiping also holds a chance, but you'd be brave to back him from stall eight knowing how he likes to race. Again, market moves could be key for this Gary Moore runner, especially after what unfolded at Kempton last time out.

07/05/2019 Sport Comments Off on Chester tips, racecards, declarations and previews for the meeting live on ITV and Racing TV this Wednesday, May 8
Lifestyle