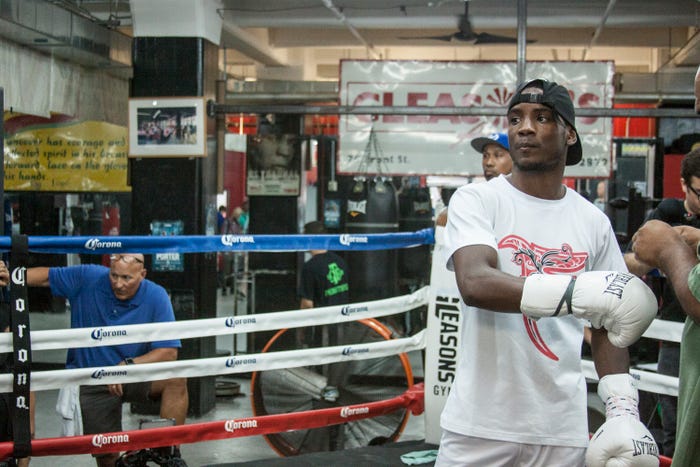 Rising star Chris Colbert says young Americans like him are "taking over boxing" and will soon force the older heads to step back.

The sport of boxing is in an exciting place for young fighters right now.

The US currently boasts a core group of talented boxers aged 25 and under, spearheaded by the pound-for-pound star Teofimo Lopez, super middleweight champion David Benavidez, and Shakur Stevenson. The latter, according to his promoter Bob Arum of Top Rank, is a mirror-image of a young Floyd Mayweather.

24-year-old super featherweight Colbert is one of the members of that group, braced to take the combat world by storm in the coming years.

He returns to the ring Saturday in a fight with Jaime Arboleda — a match which tops a three-bout Premier Boxing Champions and TGB Promotions card broadcast from the Mohegan Sun Casino in Uncasville on Showtime.

If you've not seen Colbert box before, he summed up his style in three words: "Flashy, flashy, flashy."

Nicknamed "Prime Time," Colbert can usually be seen wearing sequined boxing trunks, is full of energy as he makes his walk to the ring, and has an infectious smile — right up until the chime of the first-round bell.

He's a skilled switch-hitter, models his game on the wizardry of defensive greats like Pernell Whitaker, and what he lacks in knockout power he makes up for with speed of hand and foot.

Colbert told Insider ahead of his fight in Connecticut that he was supposed to fight four times this year, but the coronavirus pandemic reduced his activity level. Saturday's 130-pound bout is only his second of 2020.

Despite the downtime, he has kept busy being a father to his young boy, working-out, and working in the restaurant he opened in New Jersey, Prime Time Chicken.

Colbert told us he knows little about his opponent Jaime Arboleda. "I don't do studying or homework, I just know he's a guy who has two arms, two legs. That's it.

"He's coming to kill me so Saturday night it's kill or be killed, and I'm definitely going to be the one doing the killing.

"Training camp is not like: 'Watch out for this' — it's more a case of me sharpening my tools and working on what I need to work on, building power, building speed, and bettering myself as a fighter."

On being a part of the new wave of talent which is continually encroaching into the pound-for-pound conversation, Colbert said: "We definitely taking over the sport. We're all 25 and under. By the age of 27, we should all have taken over the game while the older heads step back.

"The fights for me are Shakur Stevenson and Gervonta Davis," he said. "They're big fights in my weight class that the fans would like to see, and we should all get it on in the near future."

As for his main goals in 2021 and the years ahead, Colbert said he just wants to "keep being great."

"I want to keep being a great father, a great champion, and build a great business."