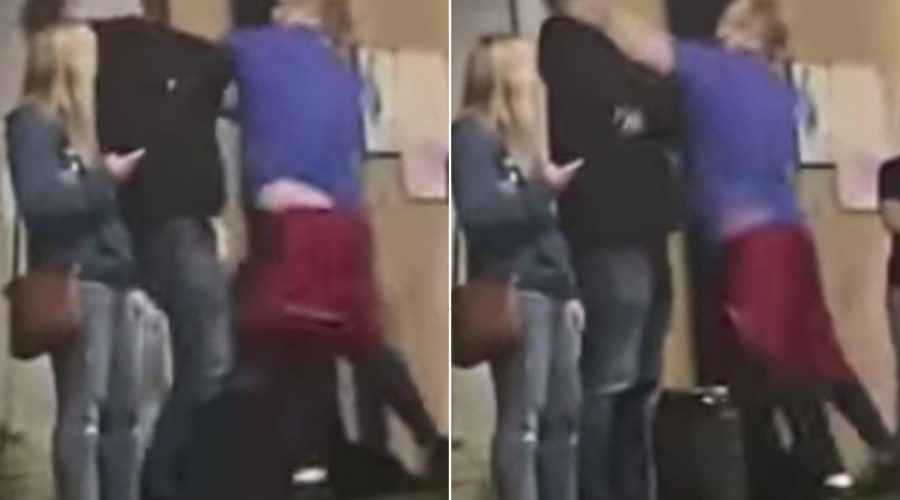 Police are investigating after a cell phone video captured a youth flag football coach sucker-punching a parent on the sideline, according to the local NBC affiliate in Michigan.

Video published Wednesday by WNDU shows an irate coach screaming at officials and then being escorted off the field at an indoor facility in Niles, Mich. As the coach reached the sideline Saturday, according to police, it appears he had a brief exchange with a parent before cocking his fist and delivering a punch to the face that knocked the parent off his feet.

Several other parents and coaches jumped in to break up the altercation, and children can be heard crying and pleading to leave the chaotic scene in the video.

“The victim, the person who got punched, came to the police department to report that he was assaulted and apparently the coach didn’t like how this spectator was looking at him,” Niles police captain Kevin Kosten told WNDU.

“He referenced that maybe he was smiling at the coach and so this coach just happened to punch him, sucker punch him, which to me means punch him in the face. There’s definitely a possibility that he could be charged with assault and battery. Some of that will certainly be up to the victim, but assault and battery would be an appropriate charge in this case.”

Ed Salvagni, a parent who posted the video to social media, told the station that he pulled his son out of Midwest Performance Academy when he saw coaches acting out of control and staff not responding to his concerns.

“He wasn’t the only bad coach there, there was others. That’s why I pulled out because I just saw it,” Salvagni said. ”We are all passionate. I’ve been known to be fiery as a baseball coach with youth kids but you have to have a level of restraint. You can’t be that amped up to where you would assault a parent, or a bystander, anybody in front of children.”