Alex de Minaur has added the Atlanta Open to his Sydney International title win from earlier this year after a dominant victory over American Taylor Fritz. 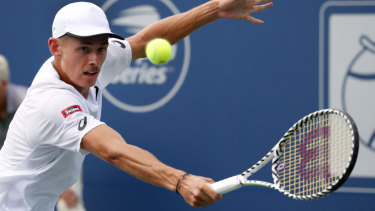 Alex de Minaur fires a back-hand back at Taylor Fritz during the Atlanta Open final.Credit:AP

De Minaur, 20, broke Fritz's serve twice in the first set and dominated the second-set tiebreaker to seal his second ATP Tour trophy with a routine 6-3, 7-6 (7-2) win in Sunday's final.

The youngest finalist in the decade-long history of the Atlanta Open, de Minaur will move up to world No.25 when the rankings are updated on Monday.

De Minaur went the entire tournament without facing a break point and he fittingly clinched victory with a deft serve-and-volley backhand winner. 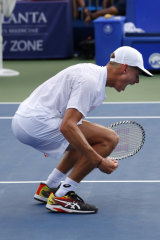 The moment he sealed it: Alex de Minaur celebrates his win over Taylor Fritz to claim the Atlanta Open.Credit:AP

The Australian, who arrived in Atlanta ranked 34th in the world, was set back by a groin injury after his maiden ATP title.

He lost in the second round at both the French Open and Wimbledon, the latter in a tough five-setter against American Steve Johnson.

"It's so good to see him back playing good tennis after struggling with injuries," said a magnanimous Taylor, who made 20 unforced errors in the final.