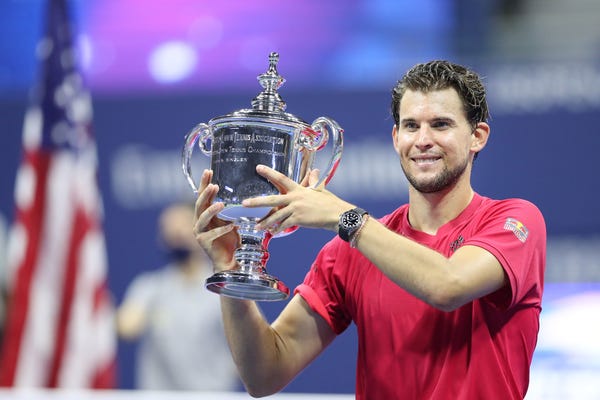 Dominic Thiem produced a gritty, gut wrenching comeback from two sets down against Alexander Zverev to win the US Open final on Sunday.

Thiem, who his lost his previous three major finals, looked set for another agonizing defeat after going 2-6, 4-6 behind in just 79 minutes.

It is the first time in the US Open era that a male player has come back from two sets down to win the final.

The last player to do so was American Pancho Gonzales in 1949, who beat countryman Ted Schroeder when the tournament was known as the US National Championships.

The match was a huge opportunity for both players to win their first ever Grand Slam titles, with a number of the tour's biggest stars not in the draw.

Rafael Nadal did not travel to the tournament amid COVID-19 concerns, while Roger Federer was absent through injury. Novak Djokovic was also defaulted out in the fourth round after hitting a line judge with an errant ball .

Zverev, playing in his first ever Slam final, had the opportunity to write himself into the history books after steaming into a two set lead.

However, the 23-year-old ultimately collapsed under the pressure to allow Thiem back into the tie, before producing two double-faults in the final set tie break to all but hand his opponent the trophy.

"I was super close to being a Grand Slam champion. I was a few games away, maybe a few points away," Zverev said in his runner-up speech, during which he broke into tears.

The line judge at the center of Novak Djokovic's US Open expulsion has been viciously trolled online, and the Serbian has pleaded with fans to stop abusing her

14/09/2020 Sport Comments Off on Dominic Thiem left his opponent in tears with a gritty, gut wrenching comeback victory at the US Open, becoming the first man ever to win the tournament from 2 sets down
Lifestyle