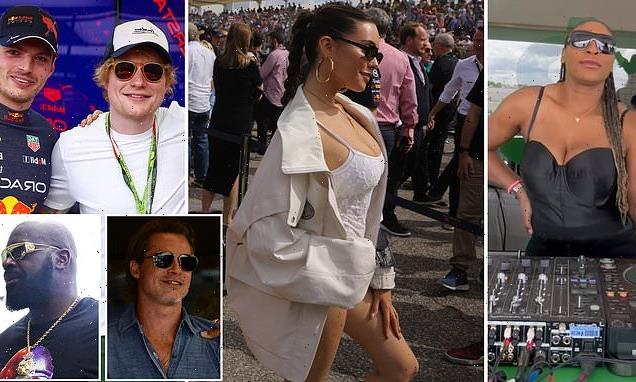 The stars were out in force in Austin on Sunday as thousands of Formula One fans descended on the Circuit of the Americas for a high-octane United States Grand Prix.

Brad Pitt, Ed Sheeran, Serena Williams, Shaquille O’Neal and Apple CEO Tim Cook were all trackside for the F1 race, to watch the likes of Lewis Hamilton and Max Verstappen go toe-to-toe around the circuit.

It was a complete sell-out to the public, too, with a record 440,000 fans heading for the Austin circuit across the entire race weekend, as F1 fever continues to rise stateside.

Legendary Oscar-nominated actor Pitt was present across the entire weekend, and was pictured in the Mercedes garage on Sunday, where he greeted his good friend Hamilton alongside Apple CEO Cook. 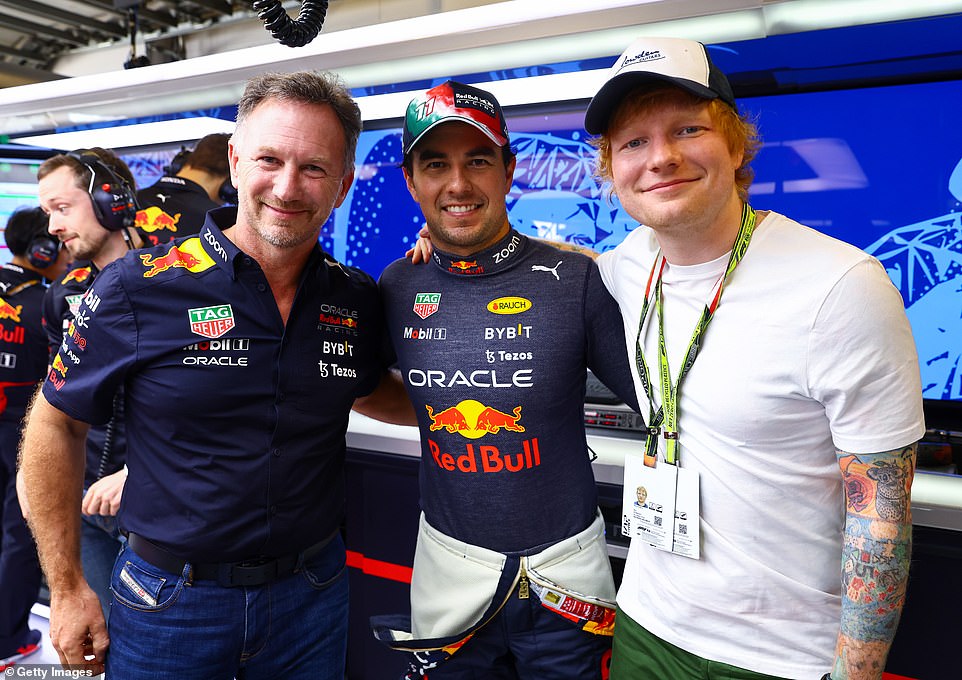 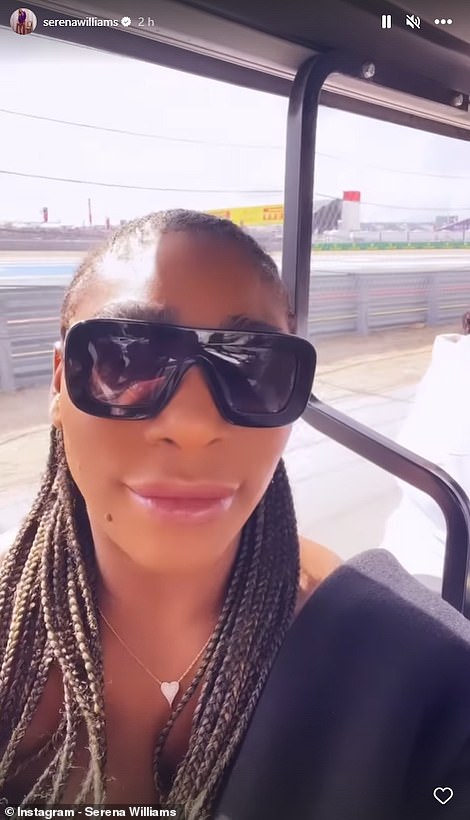 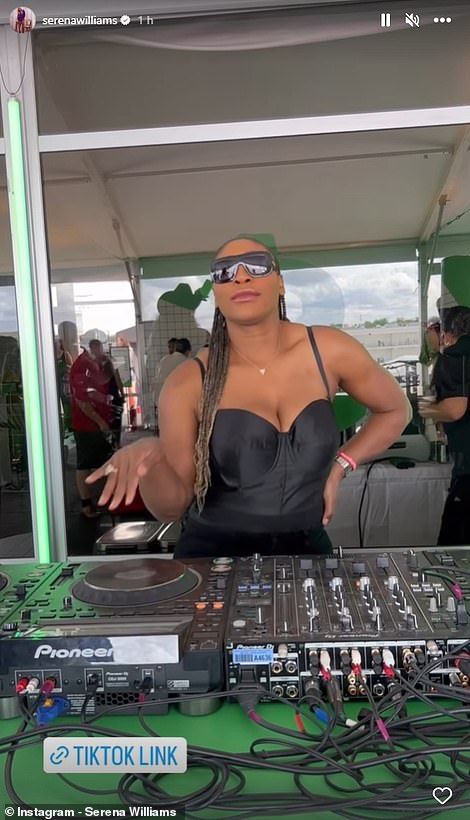 Fresh from her tennis retirement at the US Open, Serena Williams was a special guest at the United States Grand Prix 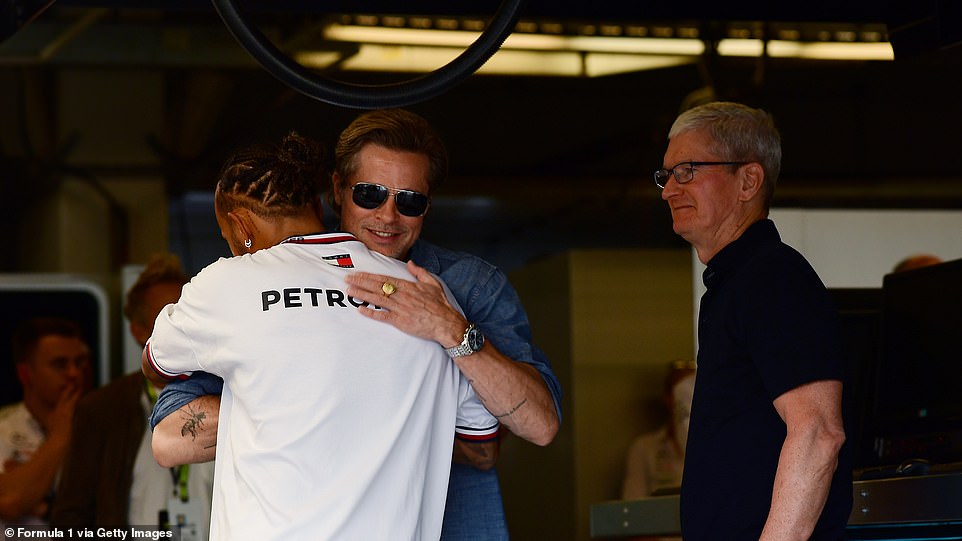 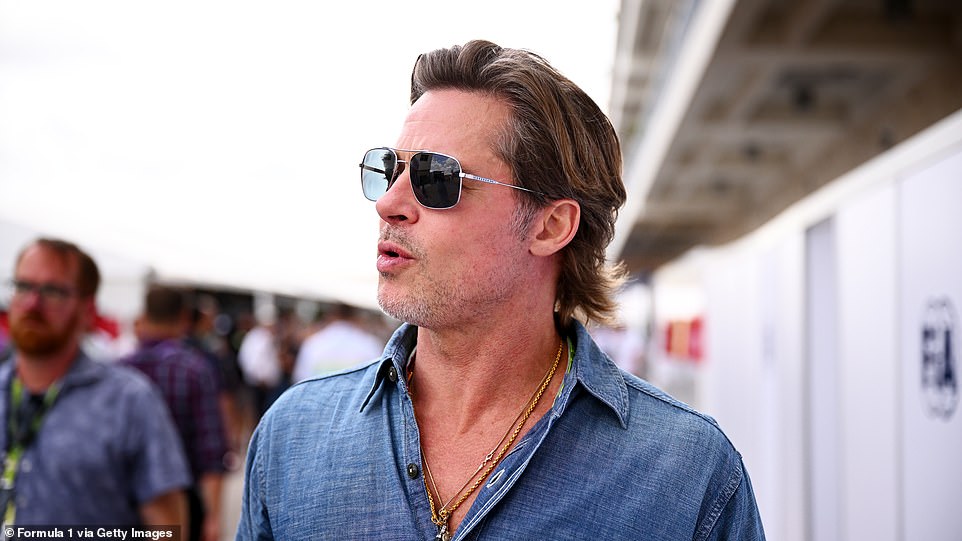 Pitt has been at the United States Grand Prix all weekend, attending Friday practice, Saturday qualifying and the Sunday race 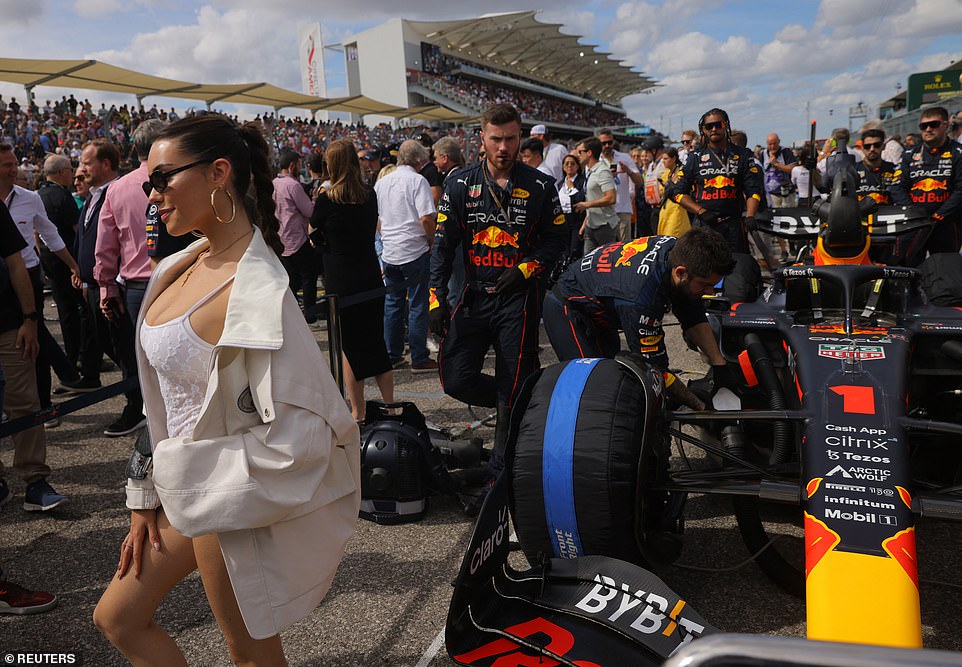 American singer Madison Beer (left) poses for a photo next to the Red Bull of Verstappen ahead of the race in Austin, Texas 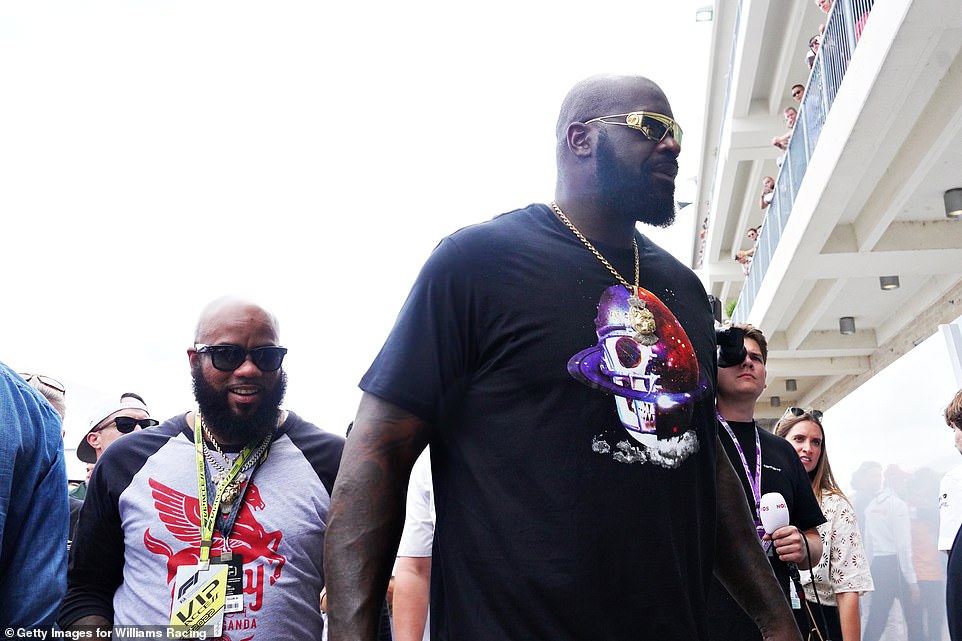 Basketball legend Shaquille O’Neal pays a visit to the Williams garage ahead of the US Grand Prix in Austin, Texas 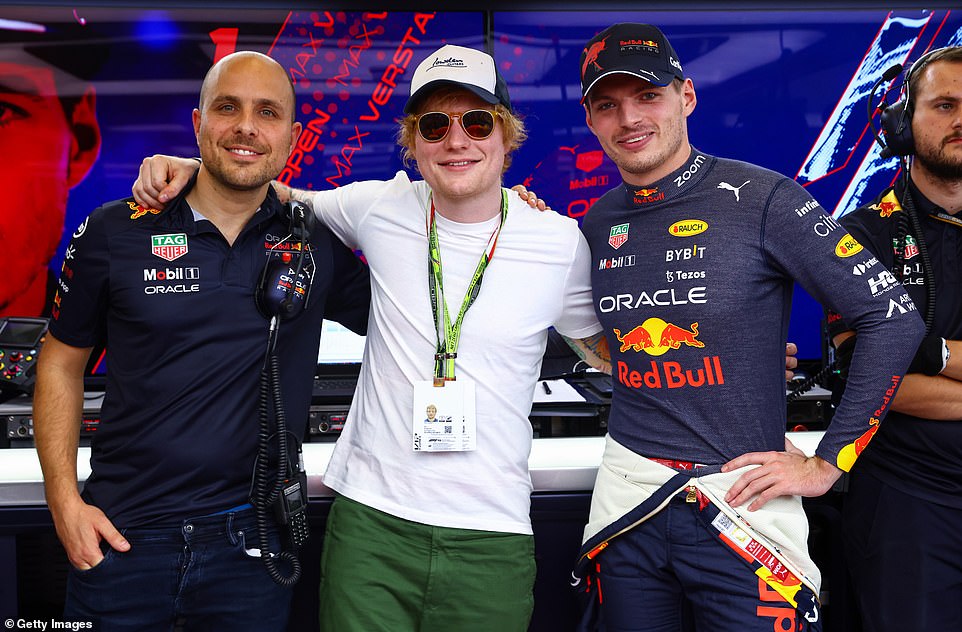 He was also on the track before the race, where he appeared less than enthused with Sky Sports presenter Martin Brundle’s attempts to interview him, brushing him off and instead continuing his journey towards the front of the grid.

That snub ensured he felt the wrath of F1 fans on social media, as the majority sided with the ever-popular Brundle and his weekly attempt to interview showbiz stars ahead of the race.

One man he did manage to speak to, meanwhile, was English popstar Sheeran, who was at the racetrack after performing for the Austin crowds after the qualifying session on Saturday.

‘It’s fun, innit,’ he said, ‘A new experience,’ before speaking about his show the previous night: ‘My first big show in America in five years, so I’m super excited to be back. I’m cheering for Red Bull now, as I’ve just met them.’ 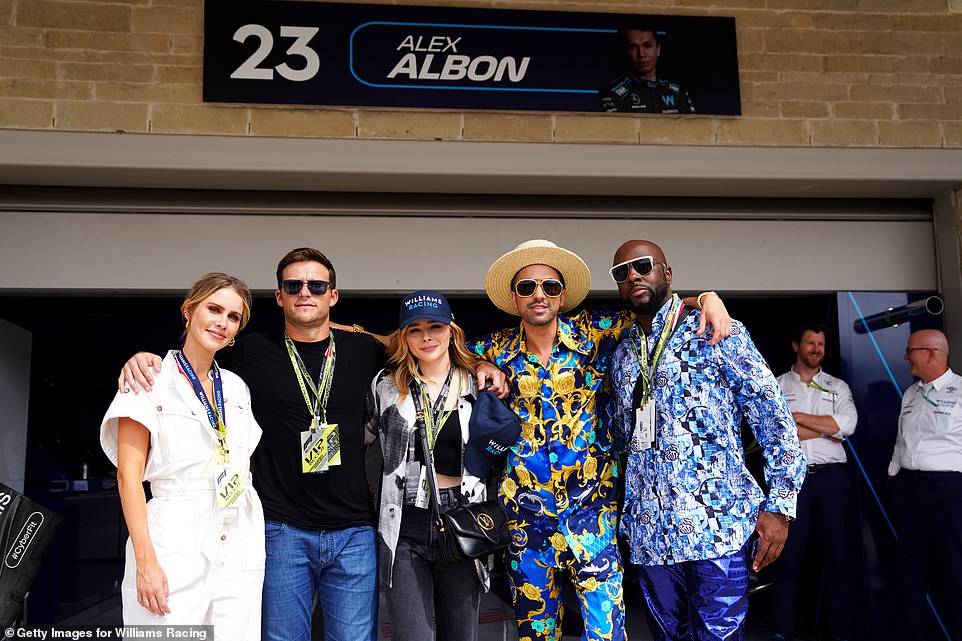 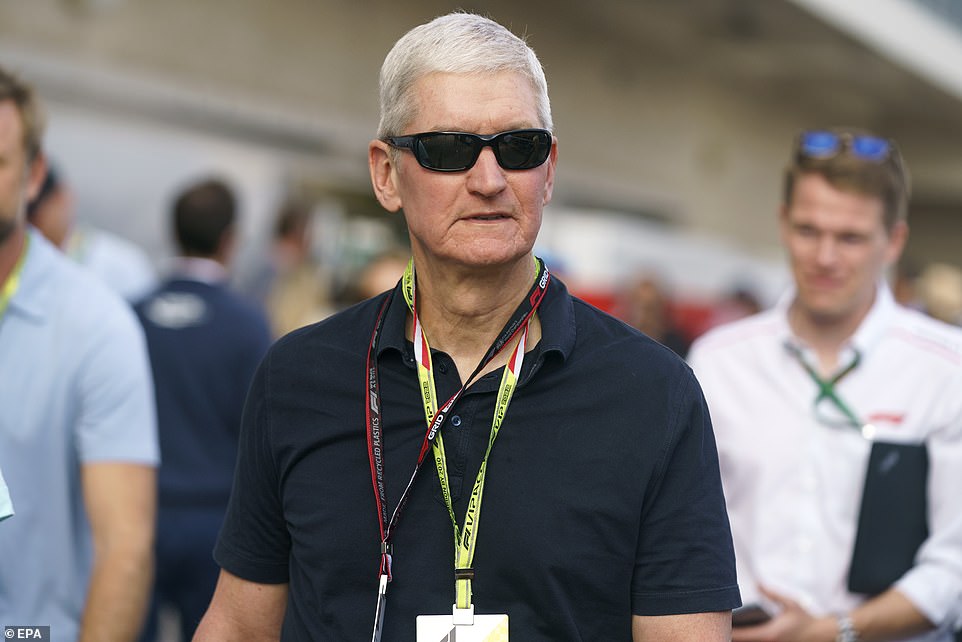 Apple CEO Cook walks through the paddock ahead of Sunday’s huge race at the Circuit of the Americas in Austin, Texas 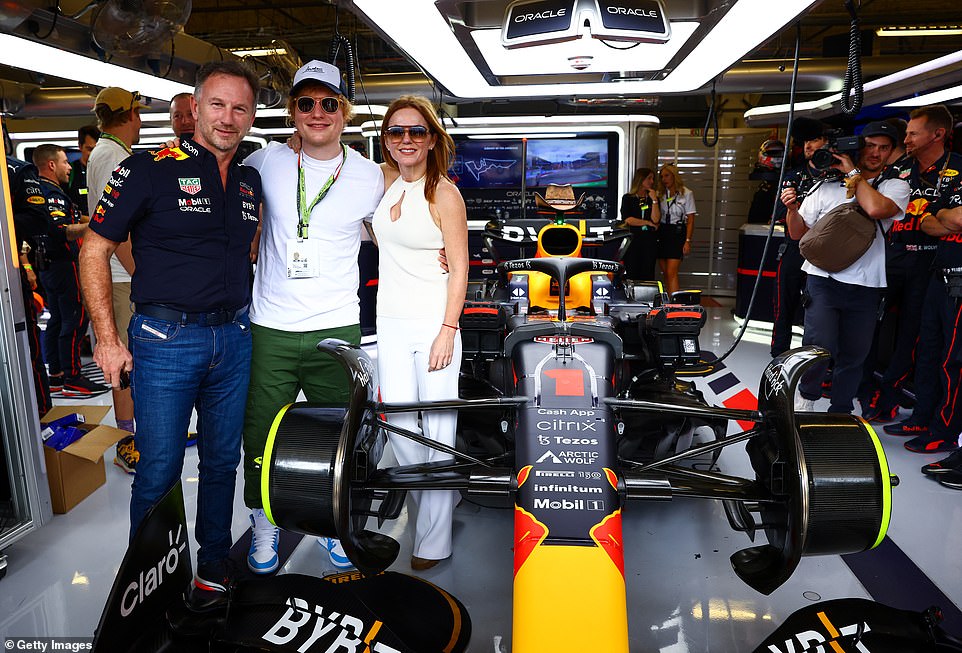 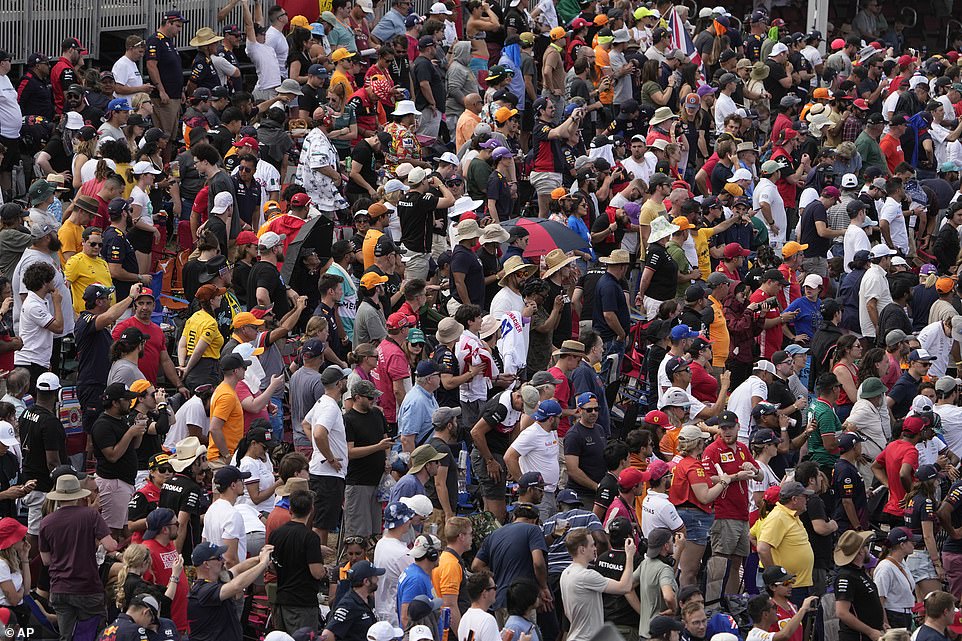 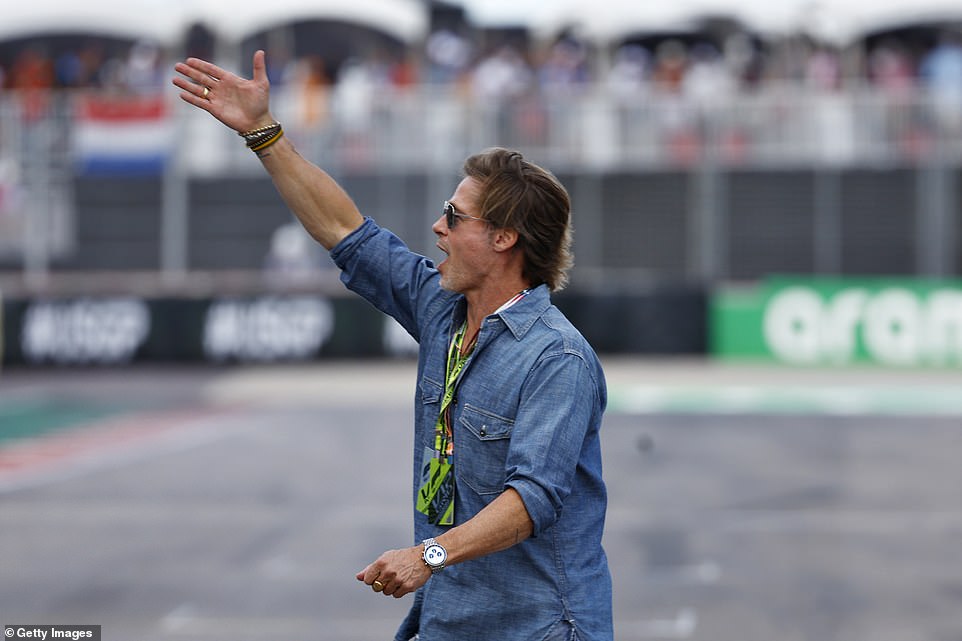 Pitt waves to the crowd in Texas, but he appeared in no mood to speak to Sky Sports’ Martin Brundle on the grid 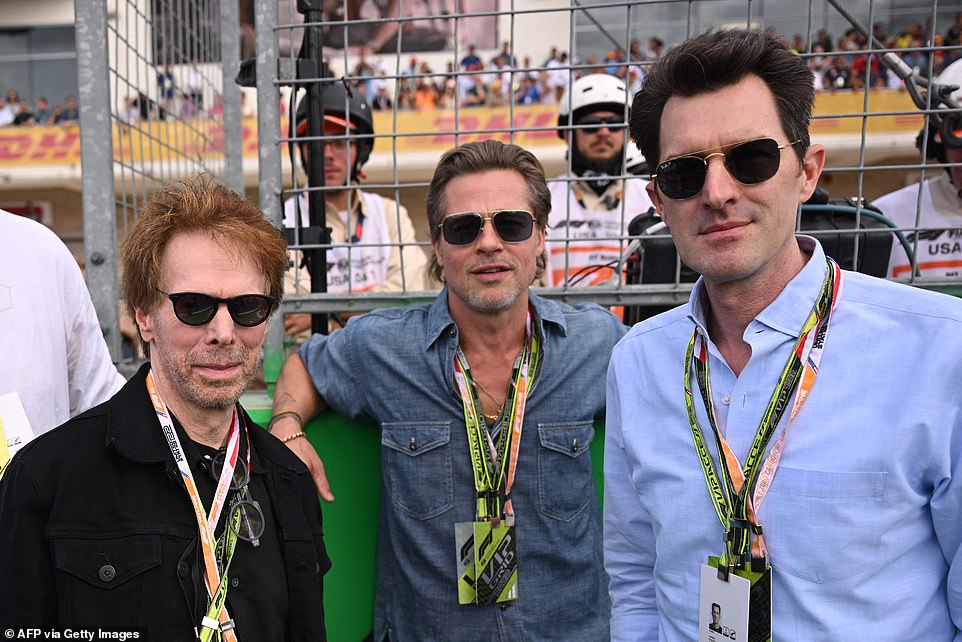 US film producer Jerry Bruckheimer (left), actor Pitt and film director Joseph Kosinski (right) ahead of the race in Austin

The Ipswich-born singer was pictured ahead of the race with Max Verstappen and Sergio Perez, as well as Red Bull chief Christian Horner and his wife Geri – formerly of the Spice Girls.

Tre Cool, the Green Day drummer, was also present on the track and joked: ‘We’re here to support the green team, Aston Martin… because they’re green!’

Serena Williams, fresh from her tennis retirement at the US Open, was also in Austin to take in the impressive scenes at the Circuit of the Americas. 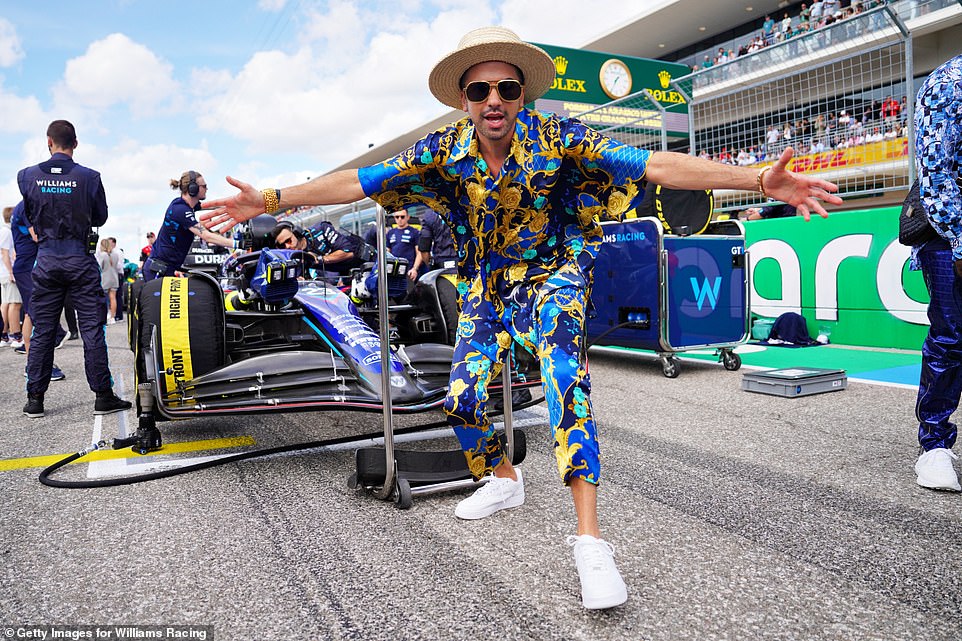 DJ Cassidy appeared to delight in his appearance at the Circuit of the Americas in Austin, Texas on Sunday afternoon 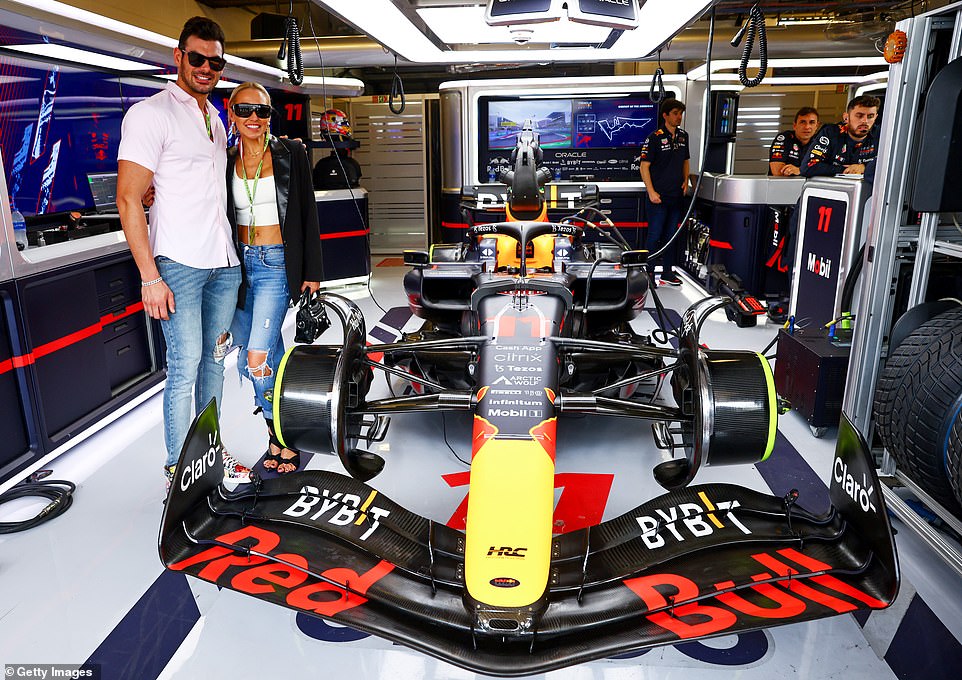 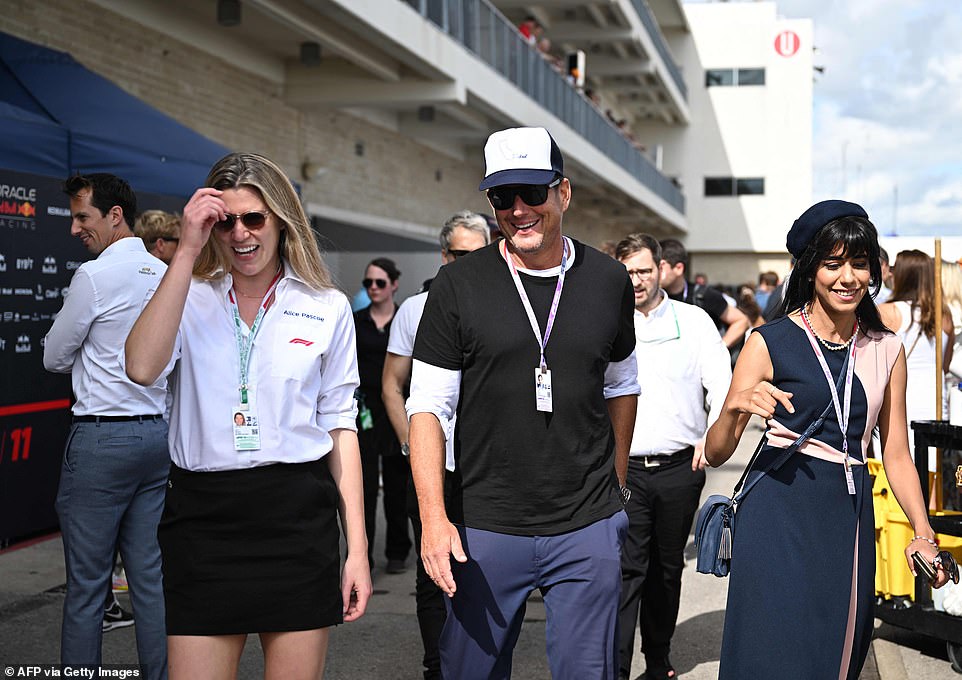 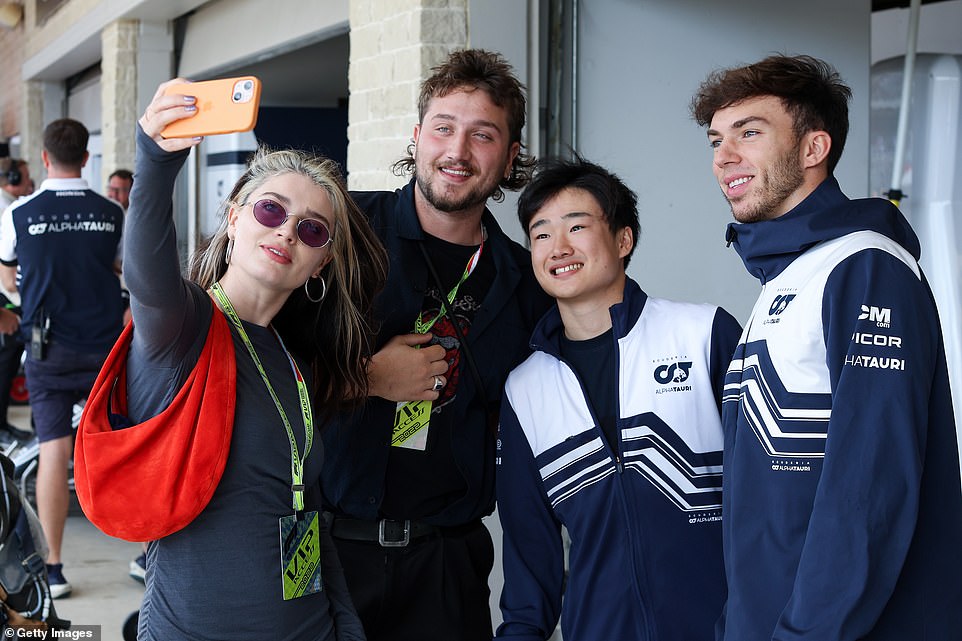 Irish actress Eve Hewson, daughter of U2 legend Bono, poses alongside her brother John and the two AlphaTauri drivers 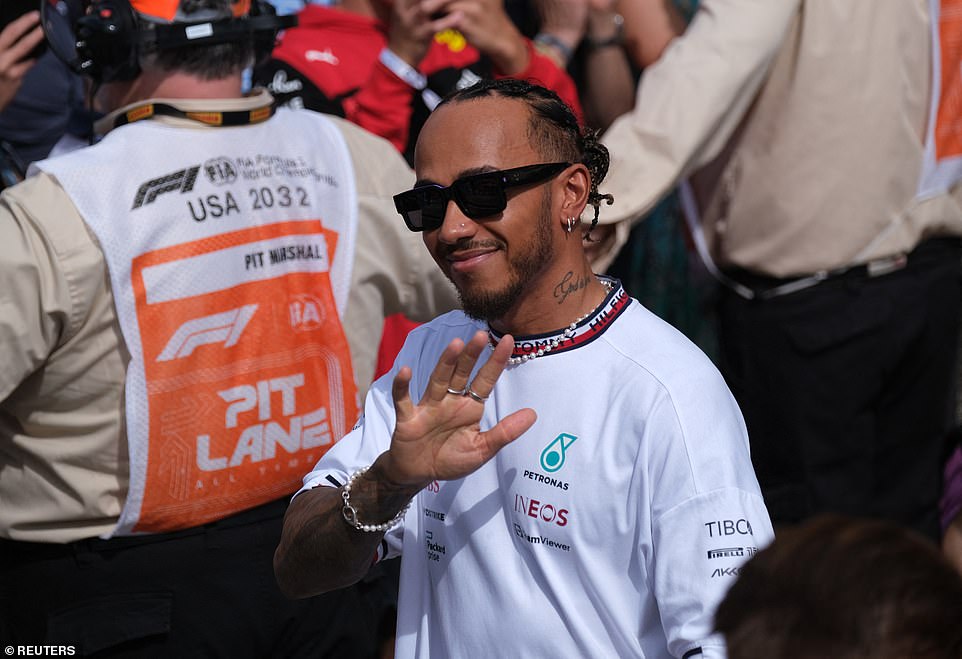 Mercedes star and seven-time world champion Hamilton waves to fans at COTA ahead of the race, which he started third

Posting to her Instagram ahead of the race, she filmed herself taking a ride in a golf cart, and also trying her hand at DJ’ing in the hospitality areas.

In the race itself, Ferrari’s Carlos Sainz started at the front, with world champion Verstappen alongside him in second. Behind them, Mercedes pair Lewis Hamilton and George Russell made up third and fourth.

It was a disastrous start for Sainz, though, who clashed with Russell on the very first corner of the race and was forced into an early retirement. 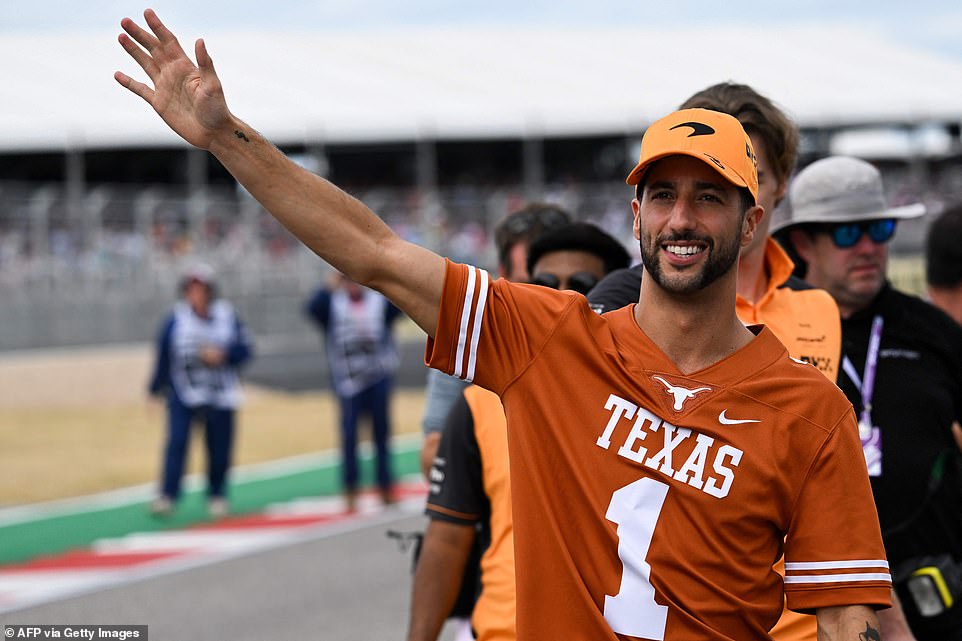 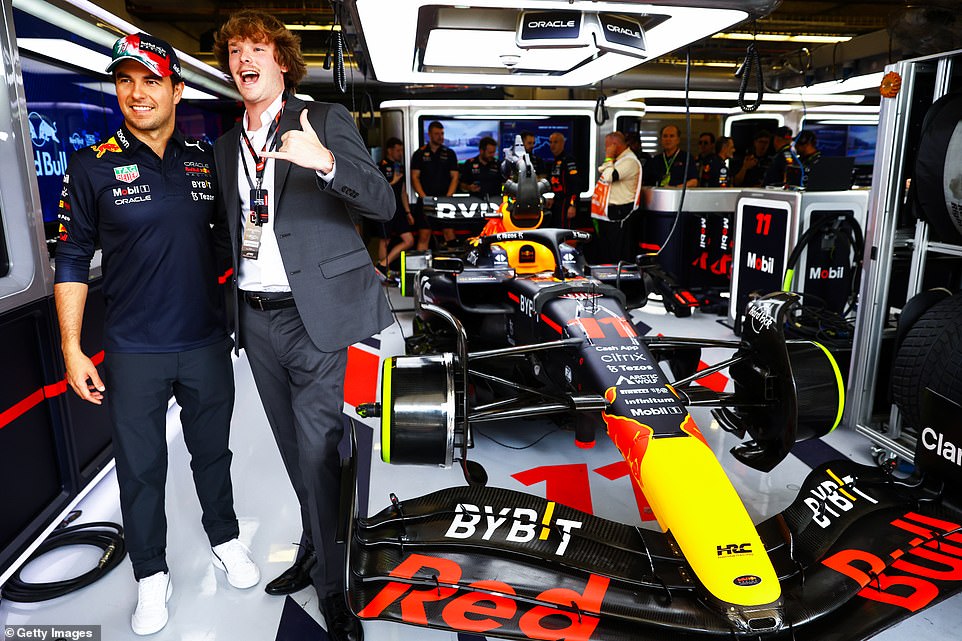 TikTok star Daniel Mac, who has over 10million followers on the platform, poses with Red Bull driver Sergio Perez on Sunday 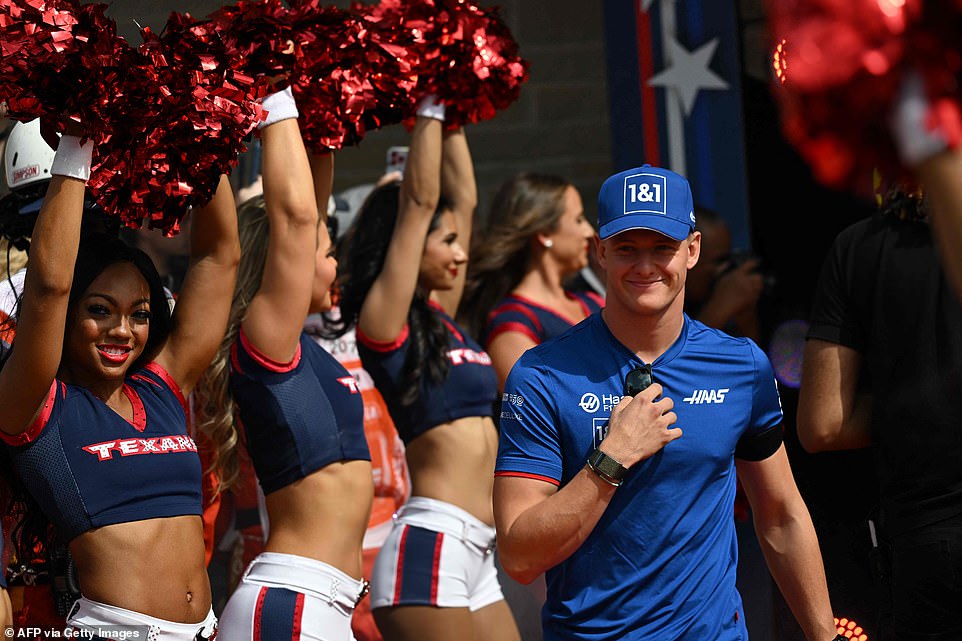 Mick Schumacher, Haas driver and son of the legendary Michael, walks past the Texans cheerleaders ahead of the race 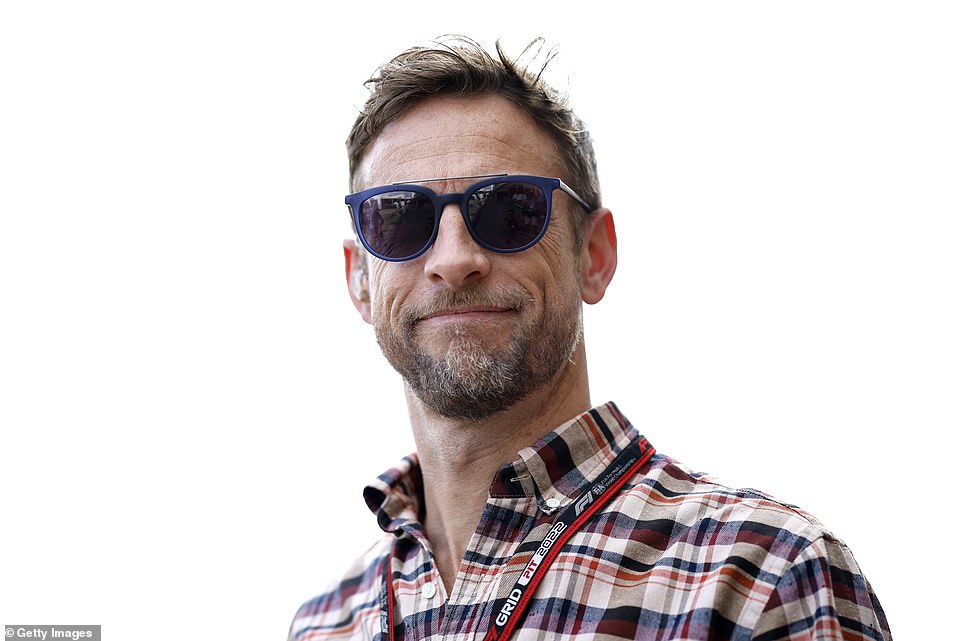 Ex-Formula One driver Jenson Button was also present at the track in a media capacity, working for British television