MAURIZIO SARRI turned to his other little star for the goal that could have a big say on his job prospects.

Deadly flyweight Pedro scored a precious away goal while 5ft 7in Eden Hazard was given an hour off to rest his legs ahead of the Premier League run-in. 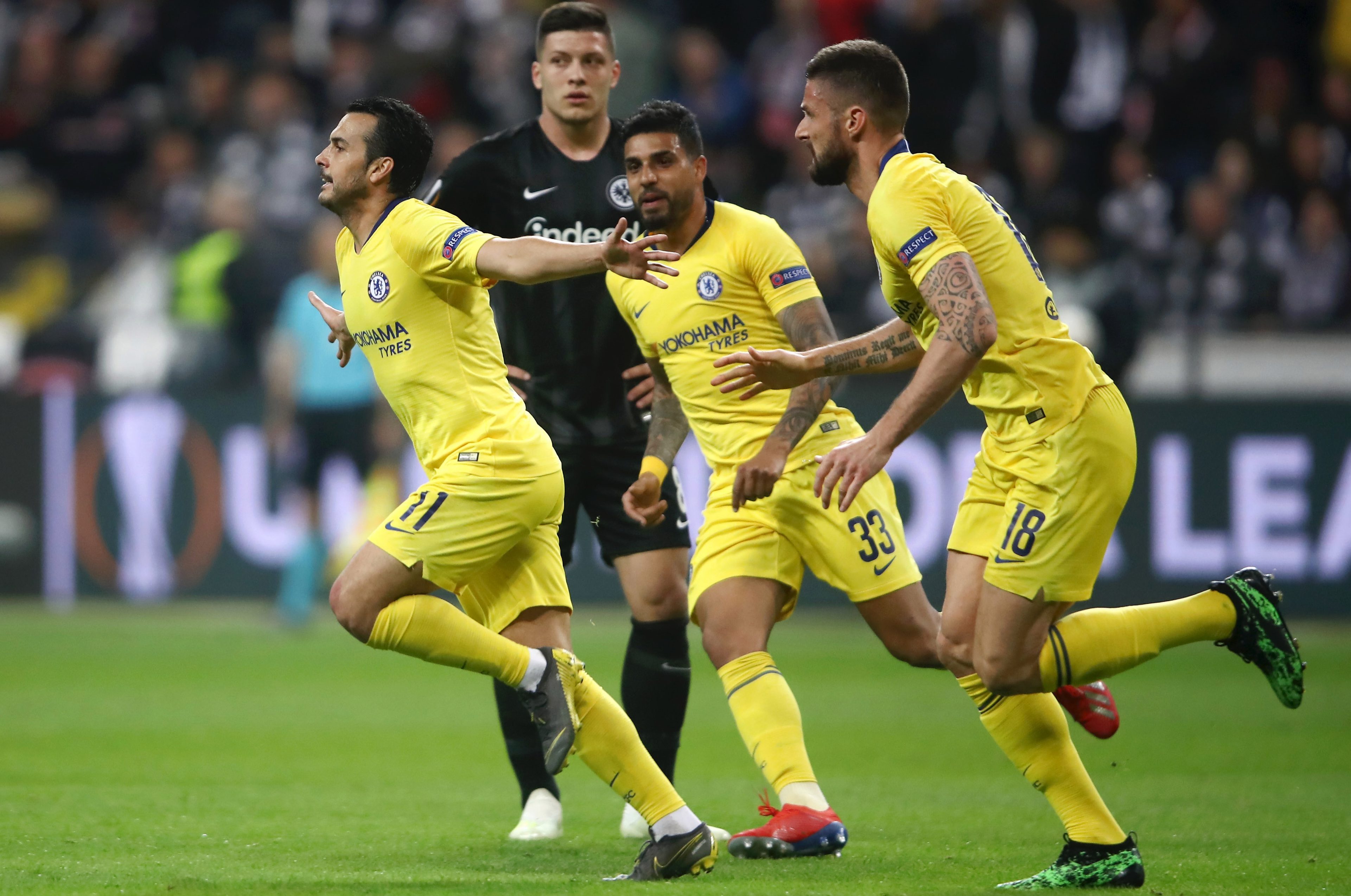 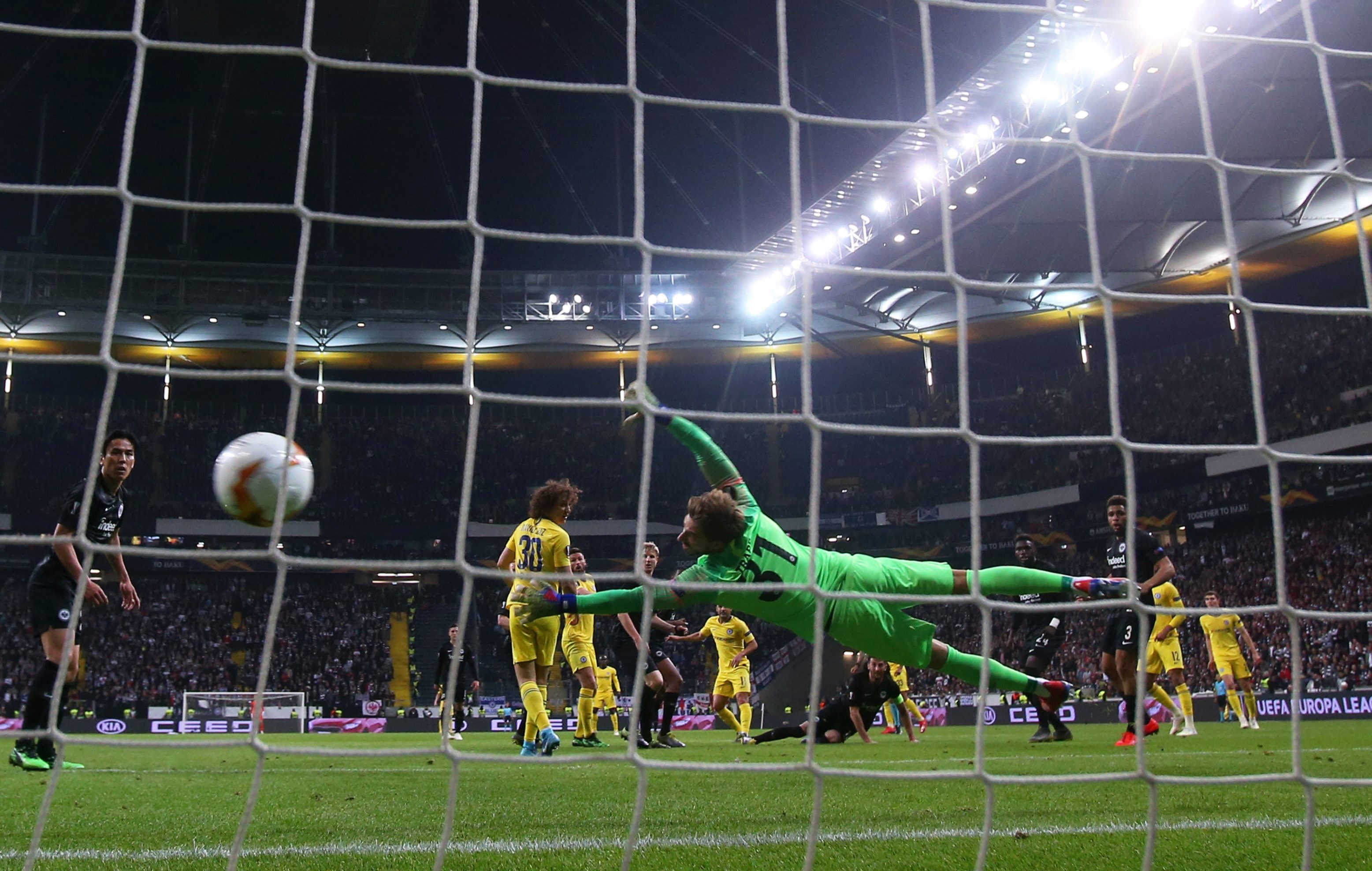 Chelsea went from strength to strength after going a goal down and are now odds on to reach the Europa League final on May 29.

This was the first time in any of their 13 European games this season that the opposition had scored first as Sarri’s team was given its first proper workout.

But after going a goal down to Luka Jovic’s classy header on 23 minutes Chelsea’s walking wounded rallied and equalised through Pedro on the stroke of half time.

They were led by the highly-decorated Spaniard but inspired by a stirring performance from England’s Ruben Loftus-Cheek, who provided the assist for the crucial strike.

The performance was all the more admirable given that boss Sarri arrived with a squad of walking wounded an a lengthy injury list.

You can now add midfielder Jorginho to those Chelsea players nursing bumps and bruises. He finished the game with his head in a bandage after a nasty second half clash.

Sarri has already declared the Europa League secondary to his ambitions of finishing in the top four to access next season’s Champions League.

Facing Watford on Sunday was always uppermost in his mind.

But as his future at Chelsea largely depends on getting back into the biggest club competition he will be pleased and grateful that experienced Pedro’s neat finish is keeping all the avenues open.

Especially after they went behind under sustained waves of pressure from the energetic Germans, when the defence that is missing a key figure in Antonio Rudiger was caught cold.

It was Jovic’s first goal since April 11, also in the Europa League. But then again this was the first time that Chelsea were coming up against a striker with international renown, backed by a solid bank of midfielders and defence.

Eintracht boss Adi Hutter even warned in advance that despite a recent mini-drought, his young Serbian star posed a serious threat in front of goal with his impressive positional sense.

And so it proved when he stepped back as the Germans swept forwards along with Chelsea’s retreating defence, providing him with the space required to guide a header diagonally past the outstretched hands of keeper Kepa.

It was the first time the opposition had drawn first blood in any of Chelsea’s 13 Europa League games this season. And it provided the shock needed to spark them back into life.

While the injury-hit back four rocked under pressure, the forwards began to take the game to their hosts and with Willian, Pedro and Ruben Loftus-Cheek assisting Olivier Giroud Chelsea got back into the game.

Loftus-Cheek in particular was making his youthful presence felt as a bold inclusion in the starting line-up instead of the expected choice of the ineffective Mateo Kovacic or Ross Barkley.

Despite a niggling back injury, his physical stature makes him hell to handle on a good night and as the game went on he pressed more and more.

A fierce shot three minutes before the break cannoned off defender Simon Falette for one of Chelsea’s seven corners in the first half.

A minute later he went just wide with another effort. 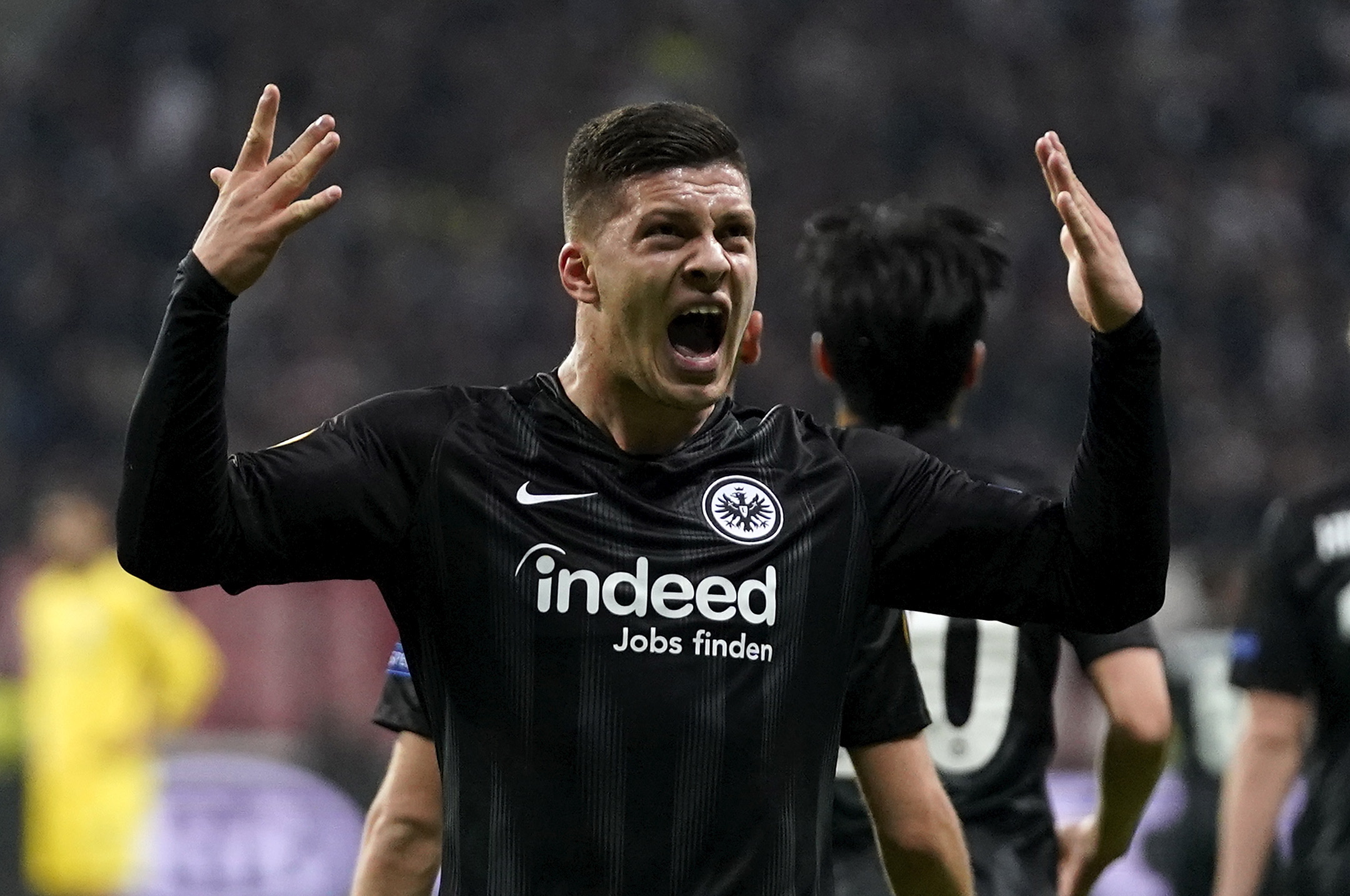 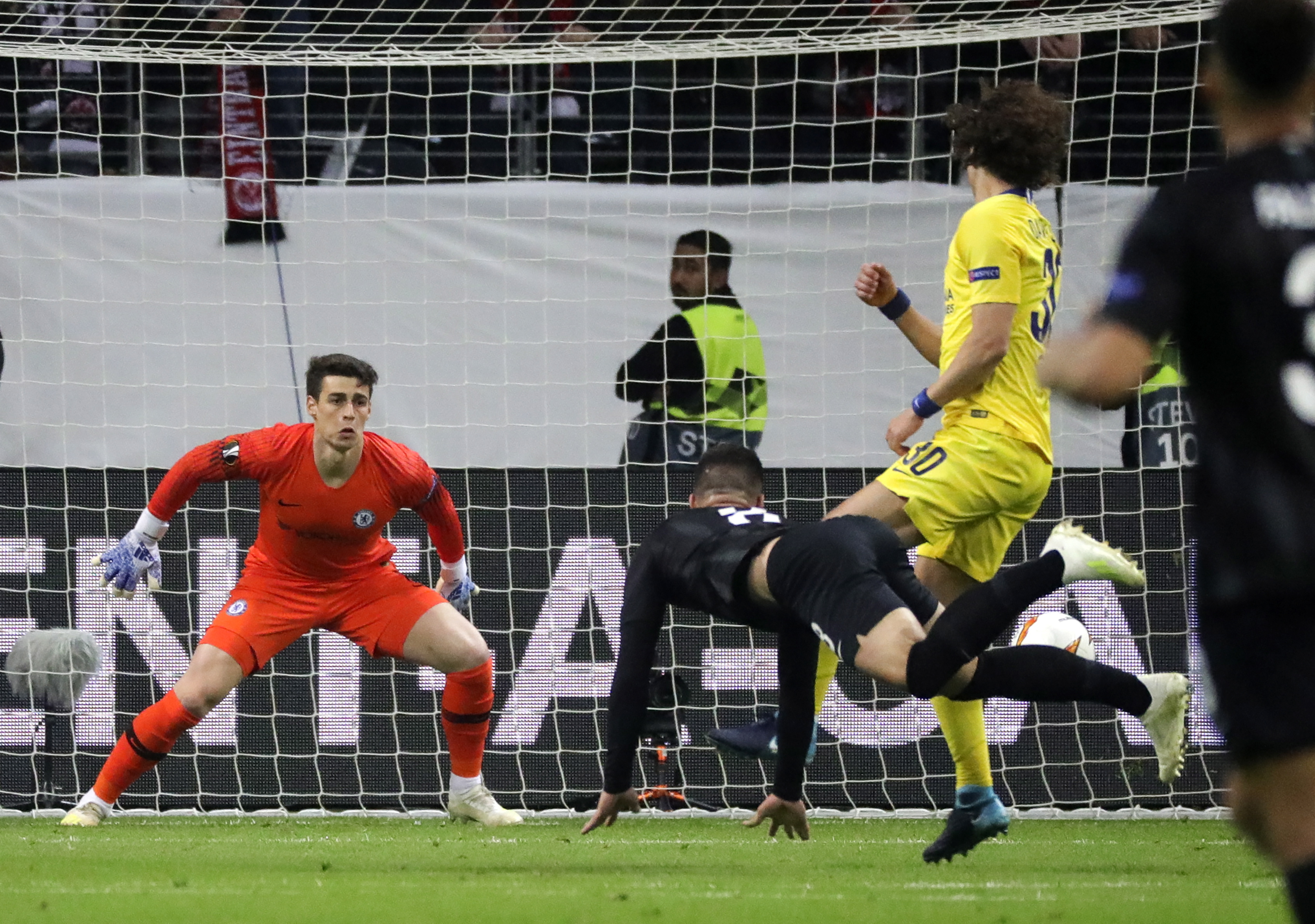 On the stroke of added time his persistence finally paid off when he burst into the Eintracht box then instead of shooting, picked out Pedro who rolled the ball in for the all-important leveller.

Loftus-Cheek should have scored in the 54th minute after a brilliant solo run then an interchange with Pedro, saw him miss a gaping goal.

On the hour, David Luiz had a ferocious 30 yard free kick tipped over the bar.

Chelsea did have an escape though when the world thought Olivier Giroud handled in his own box with 12 minutes to go. Luckily for them, Spanish ref Carlos del Cerro Grande thought otherwise. 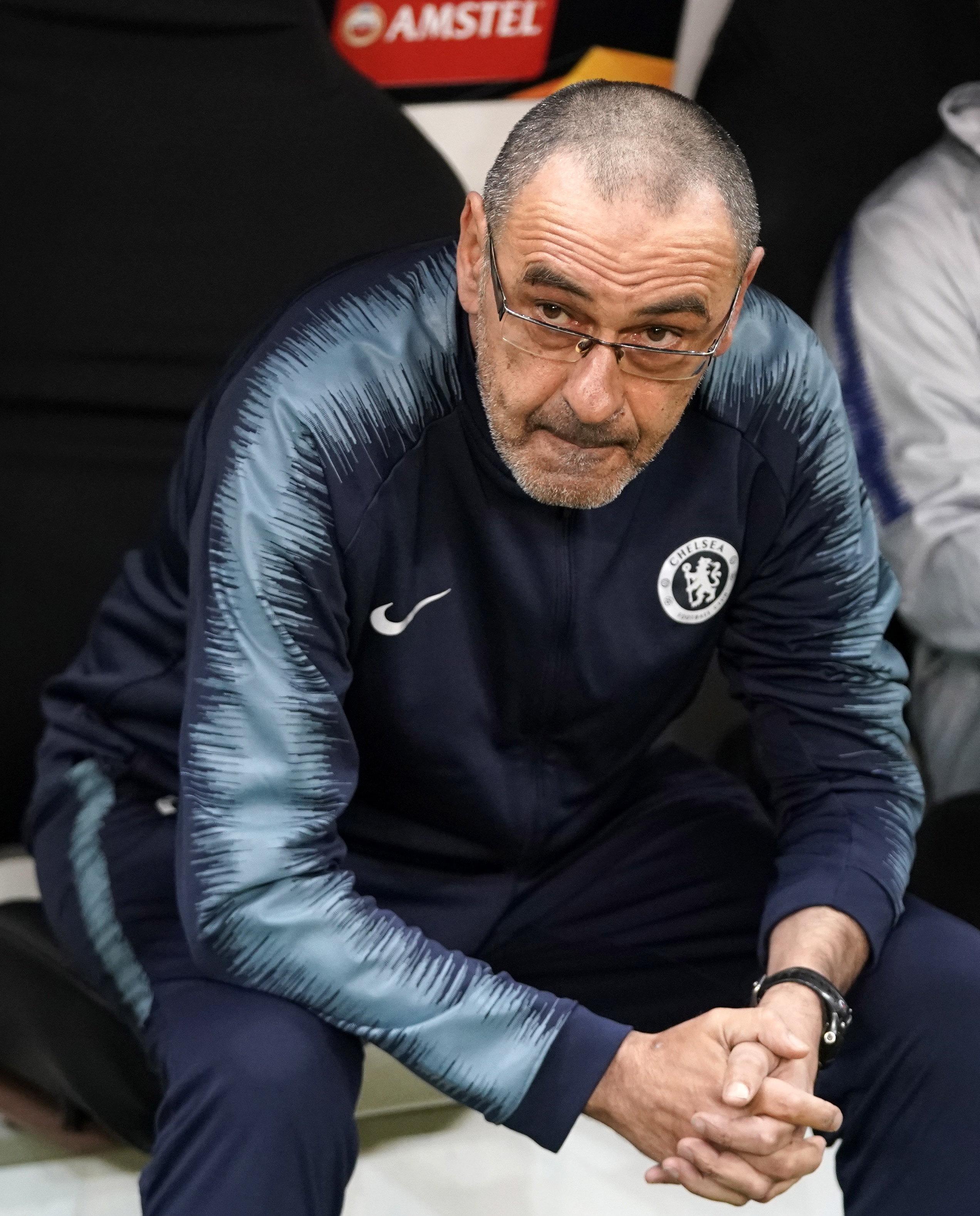