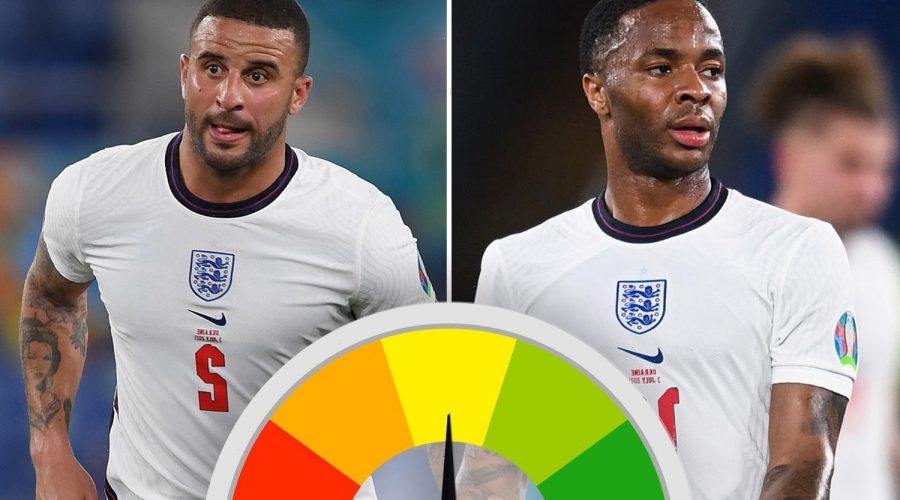 ENGLAND enjoyed the perfect quarter-final showing in Rome, as they dispatched of Ukraine 4-0 in the Eternal City. 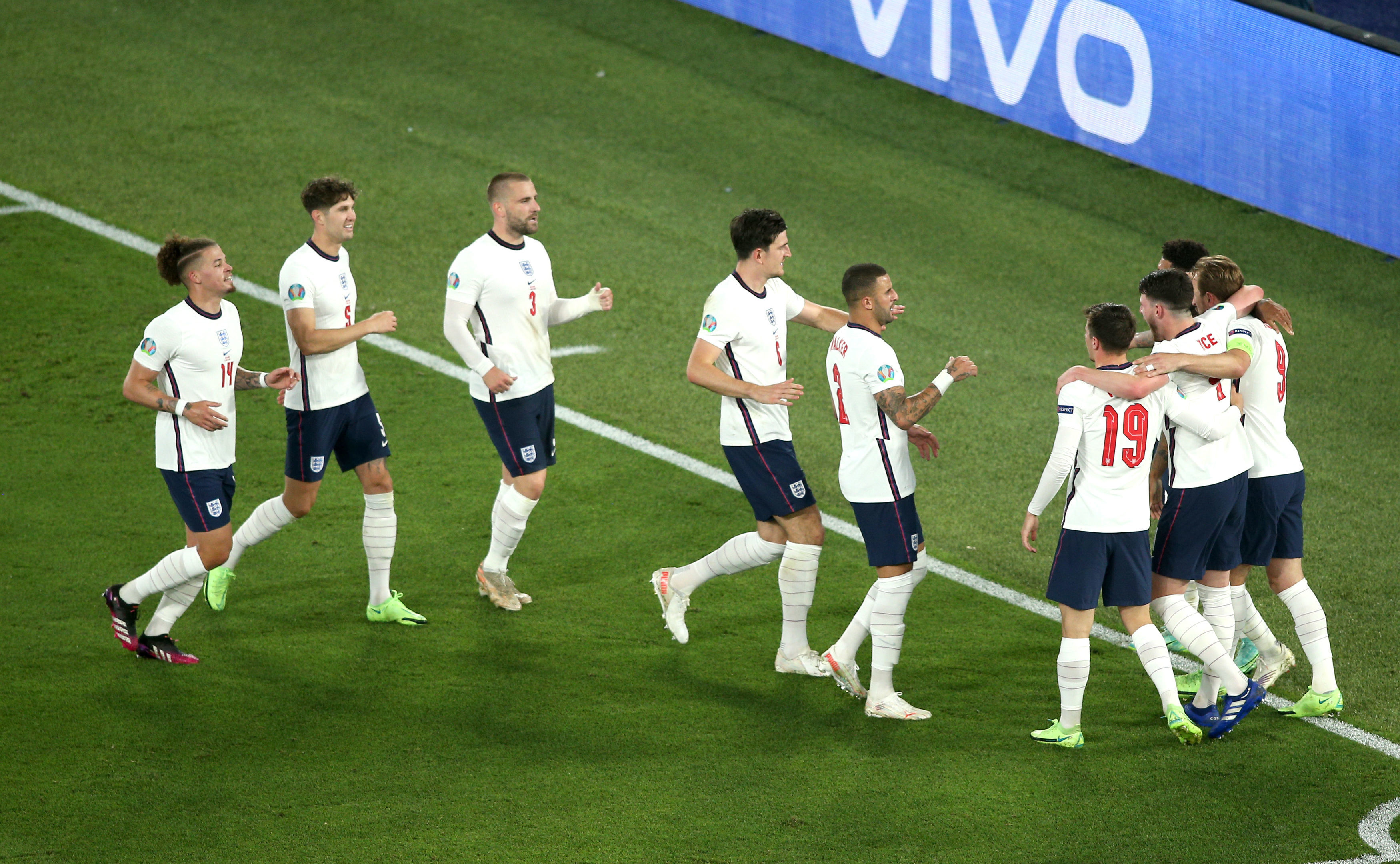 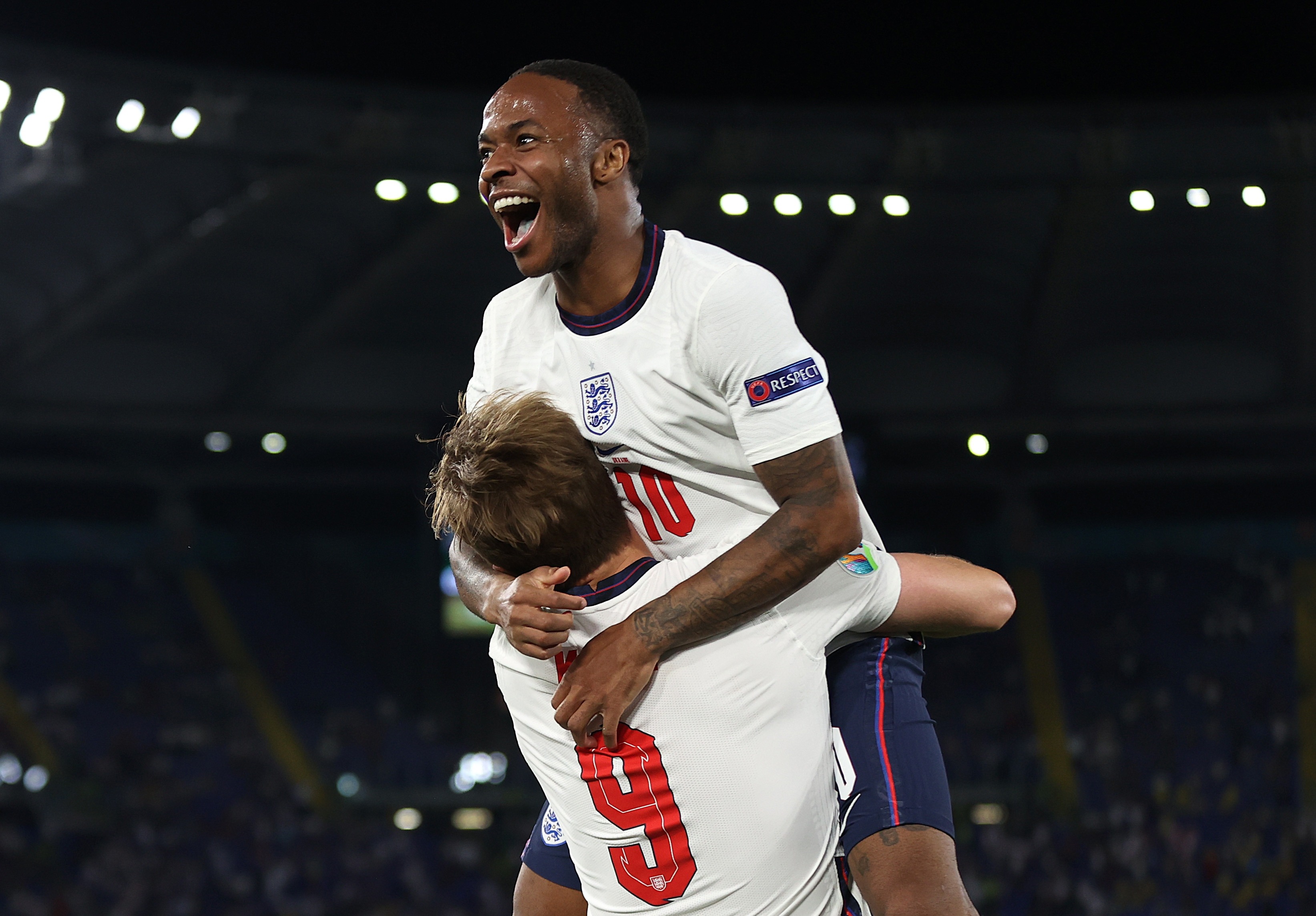 While Raheem Sterling produced a performance dripping in creativity and guile.

And substitute Jordan Henderson added a fourth from the bench to send the Three Lions to Wembley on Wednesday for date with Denmark.

Alert to shuffle away Yaremchuk’s low shot at the near post. Wild mis-kick almost gifted a consolation before he produced sharp save.

Sloppy pass gifted Ukraine chance and was bailed out by Pickford save, then strange choice to stop tracking a run into the area almost cost England dear. Never hid, and still a vital cog for England. 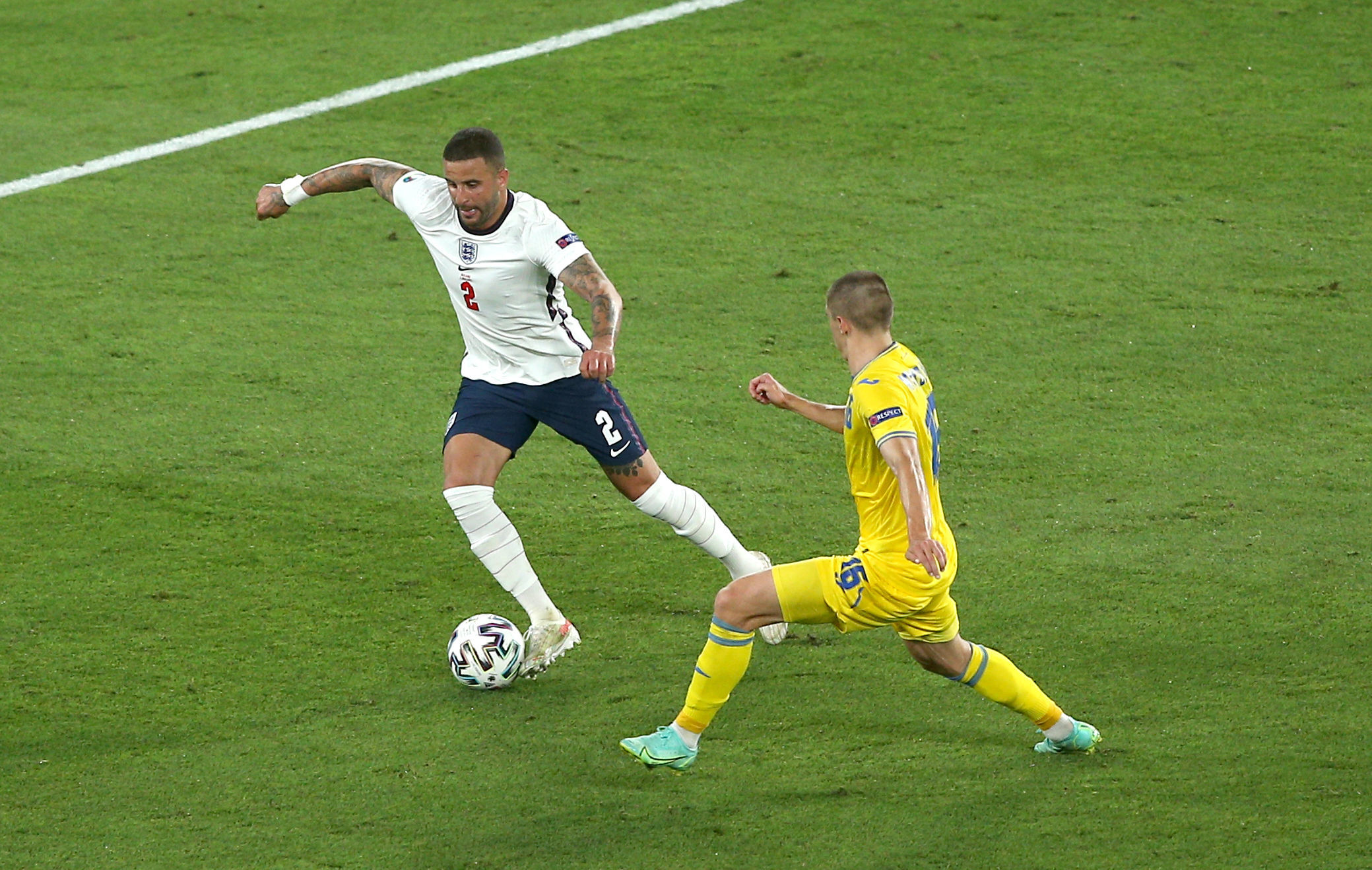 JOIN SUN VEGAS: GET A FREE £10 BONUS WITH 100s OF GAMES TO PLAY AND NO DEPOSIT REQUIRED

Crucial interception to bail out Walker as Ukraine threatened to equalise. Hardly put a foot wrong keeping the Ukrainian attack quiet and in his pocket.

In no mood to be bullied by the powerful Yaremchuk, constantly talking to players around him to organise the shape.

Then muscled his man out of the way to bury his header for the vital second. 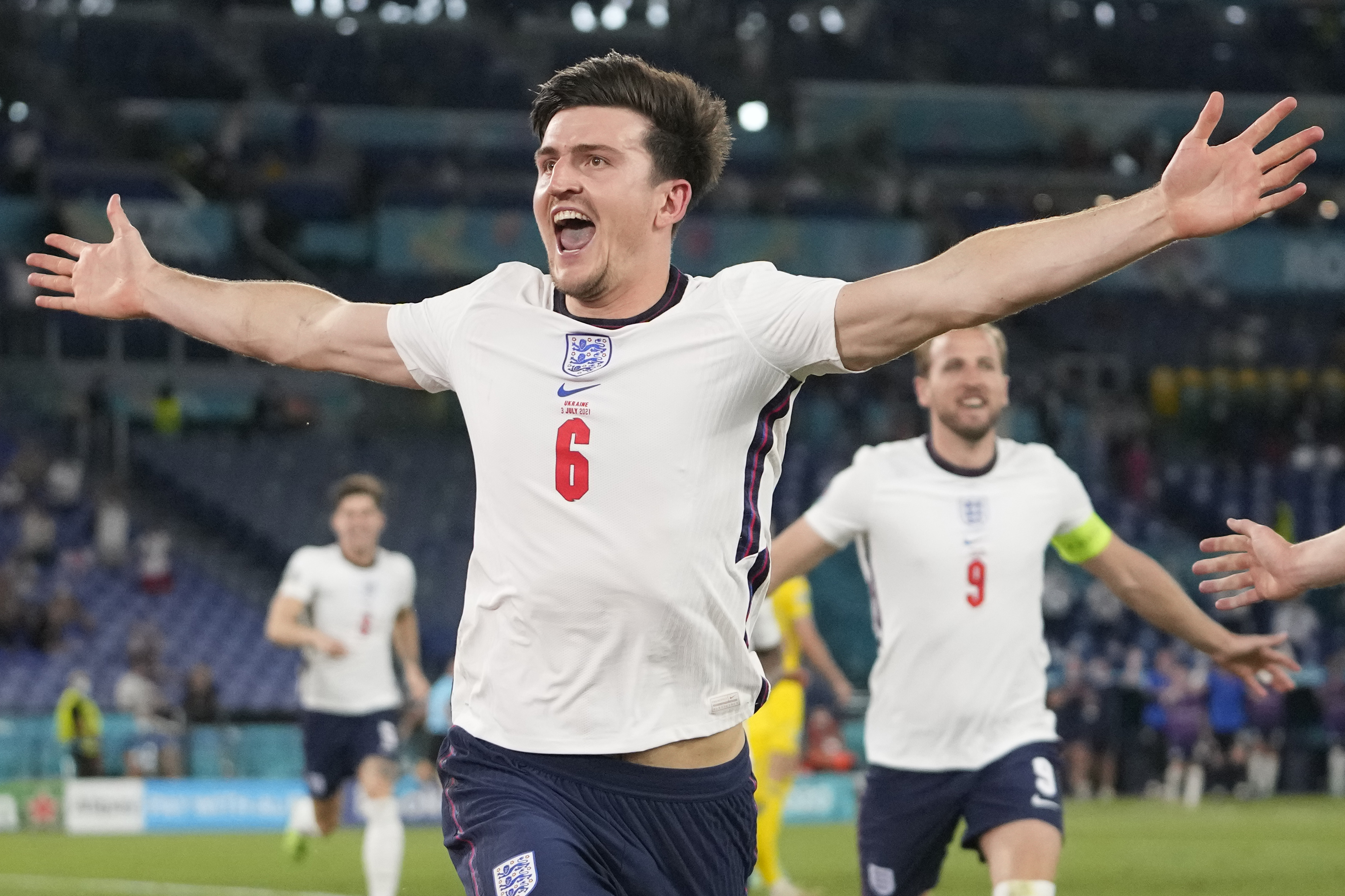 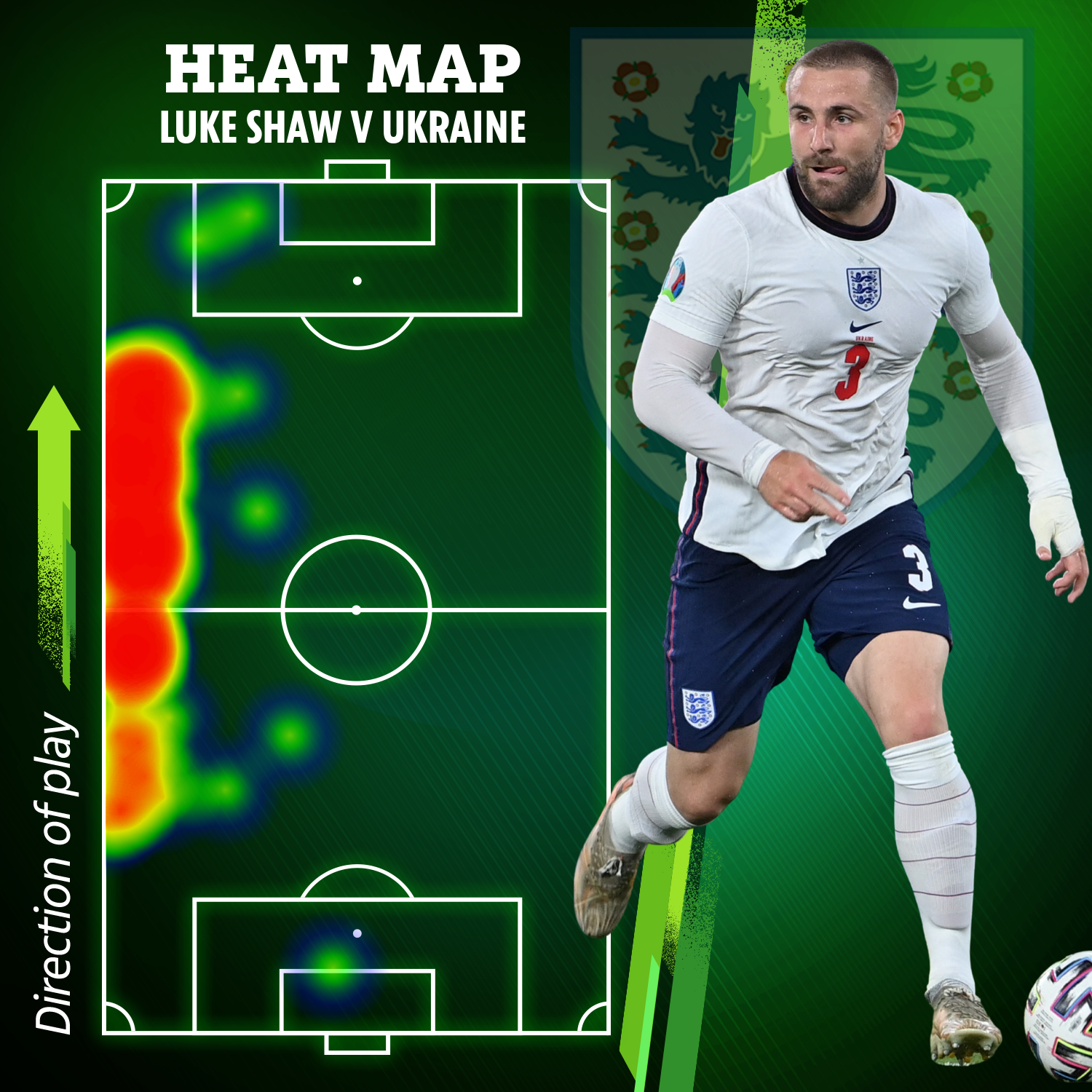 Continued where he left out against Germany, quick in the tackle and looking to link up going forward.

Brilliant free-kick delivery for Maguire’s goal and perfect overlap and cross to set up Kane’s second.

Read the game well to intercept early cross at near post, and pushed forward more than in earlier games.

Unlucky with fierce shot saved. Excellent before being subbed to avoid a booking and semi-final suspension. 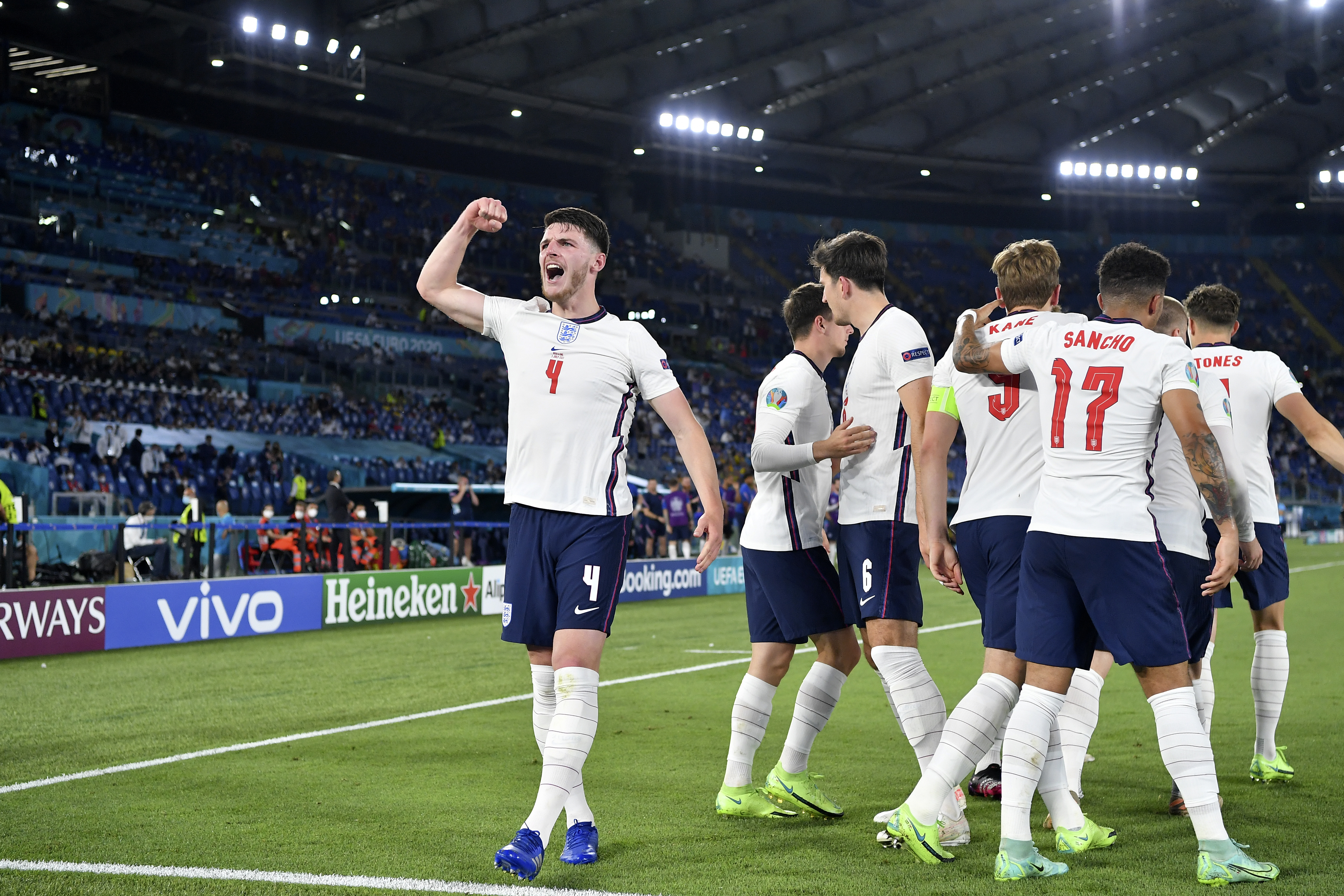 Looking more assured with every game at this level.

No need for physicality as his intelligence did the trick covering the space in this game – even when playing alone at the base once Henderson had replaced Rice. 7

Playing in the hole, first involvement was lovely flick to release Sancho. Worked on the fringes for most of the opening half but showed fine defensive intelligence to whip the ball off the feet of Zinchenko. Delivered the corner for Henderson’s header. 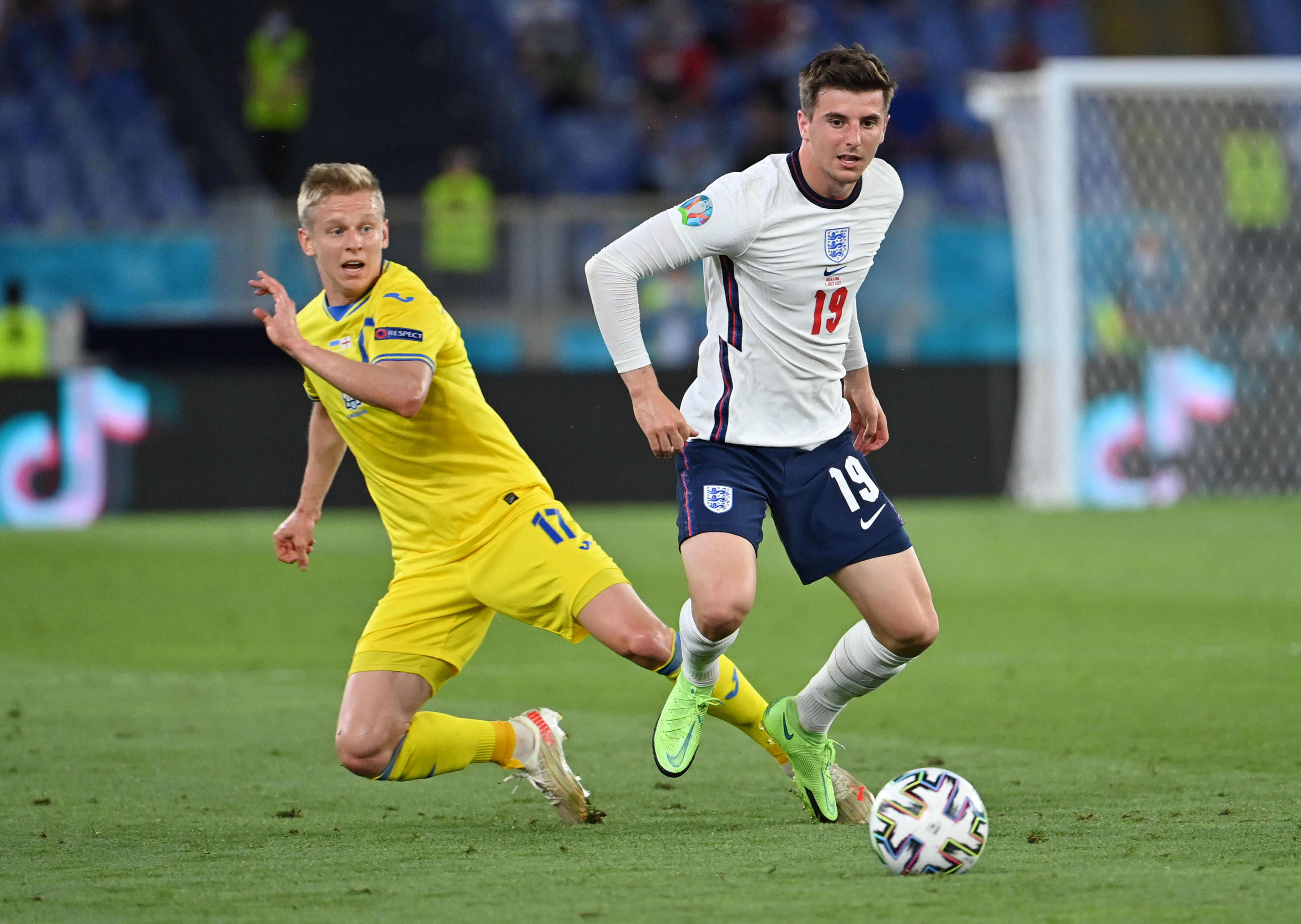 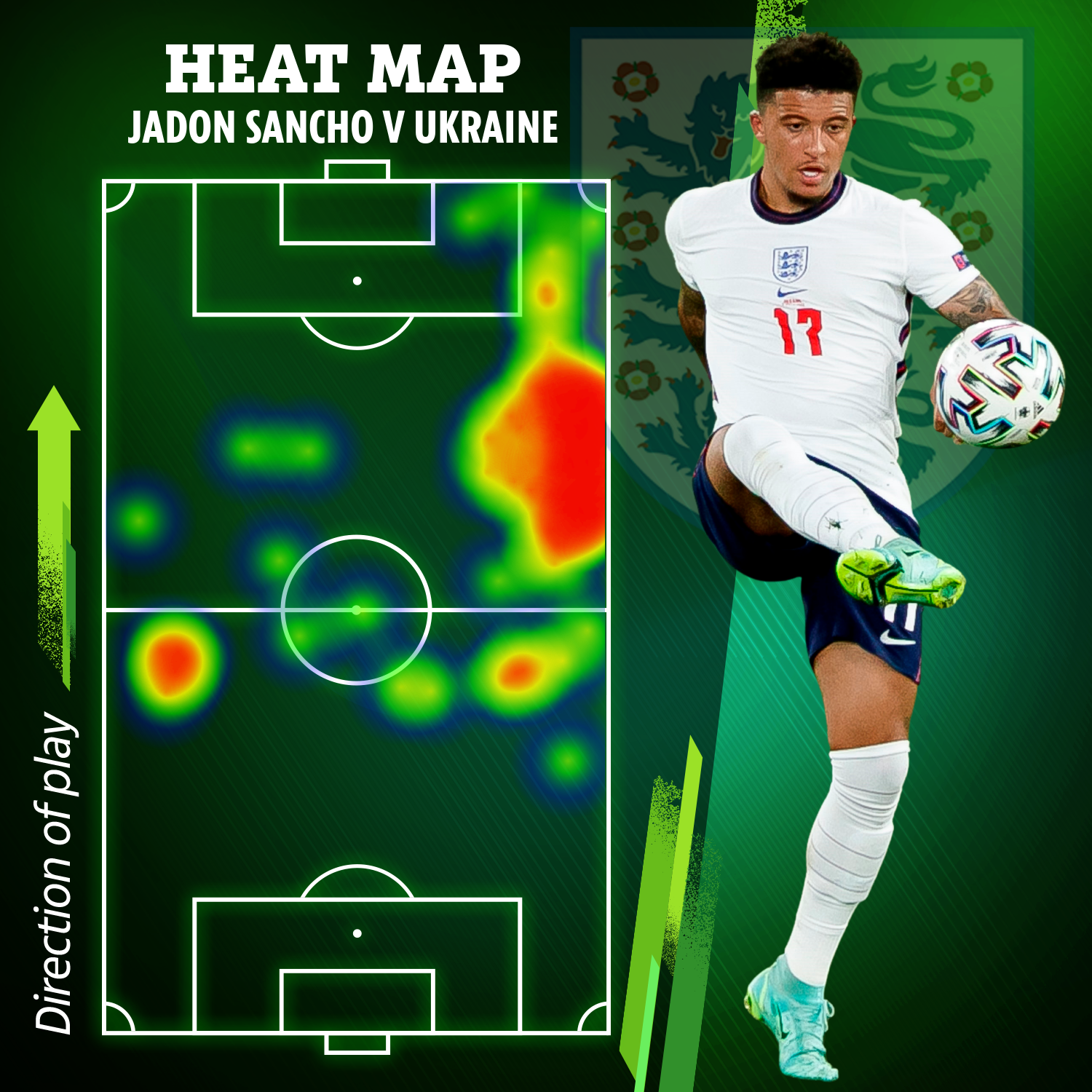 Took a while to get into game, then burst into life with piercing run which almost ended in a second goal.

Plenty of flashes of quality to more than justify his selection.

Give him the ball and he will score – which he did within four minutes. Excellent movement to head home his second and then denied the perfect hat-trick with a thumping volley.  Looks a yard sharper too. 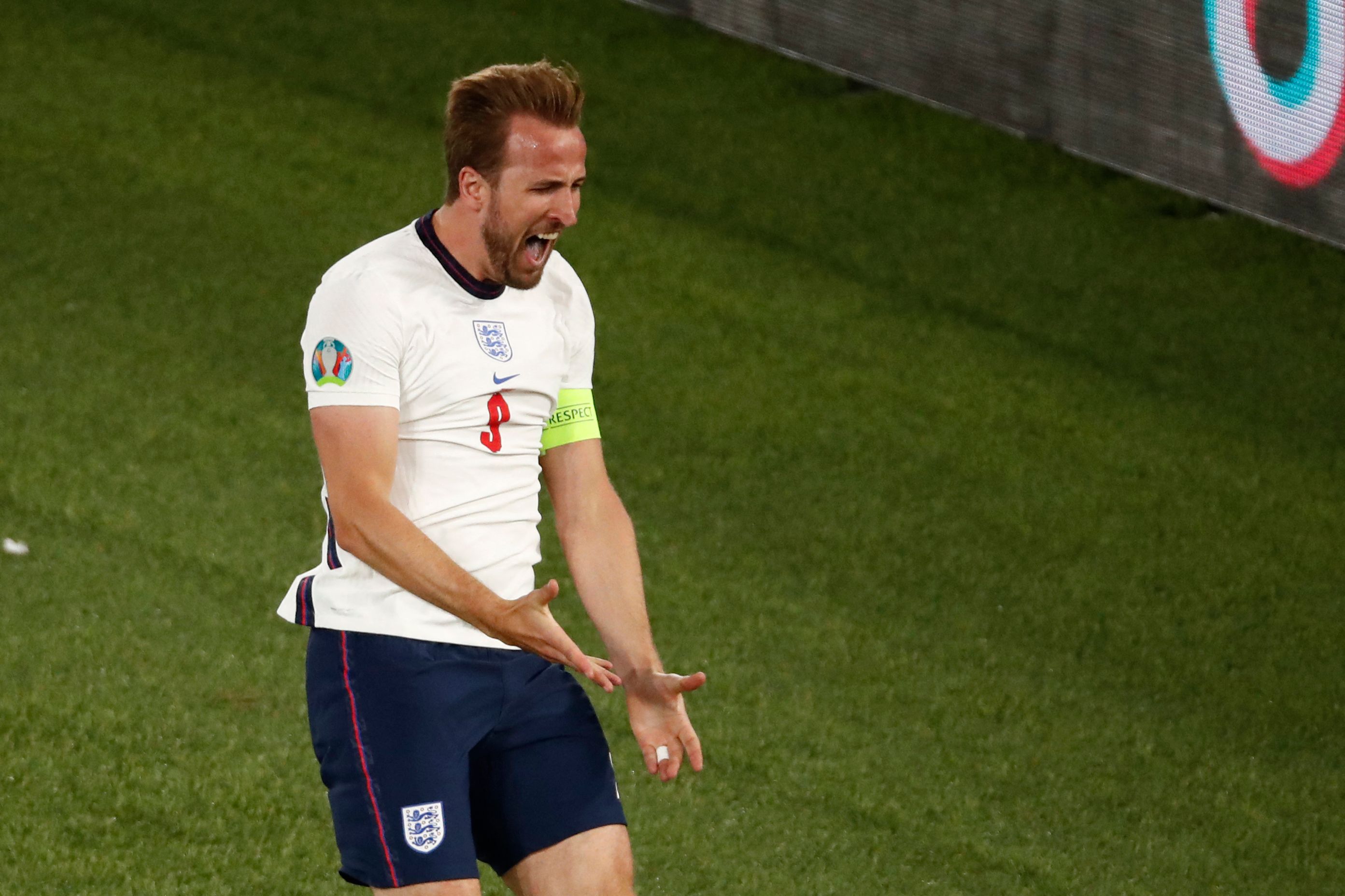 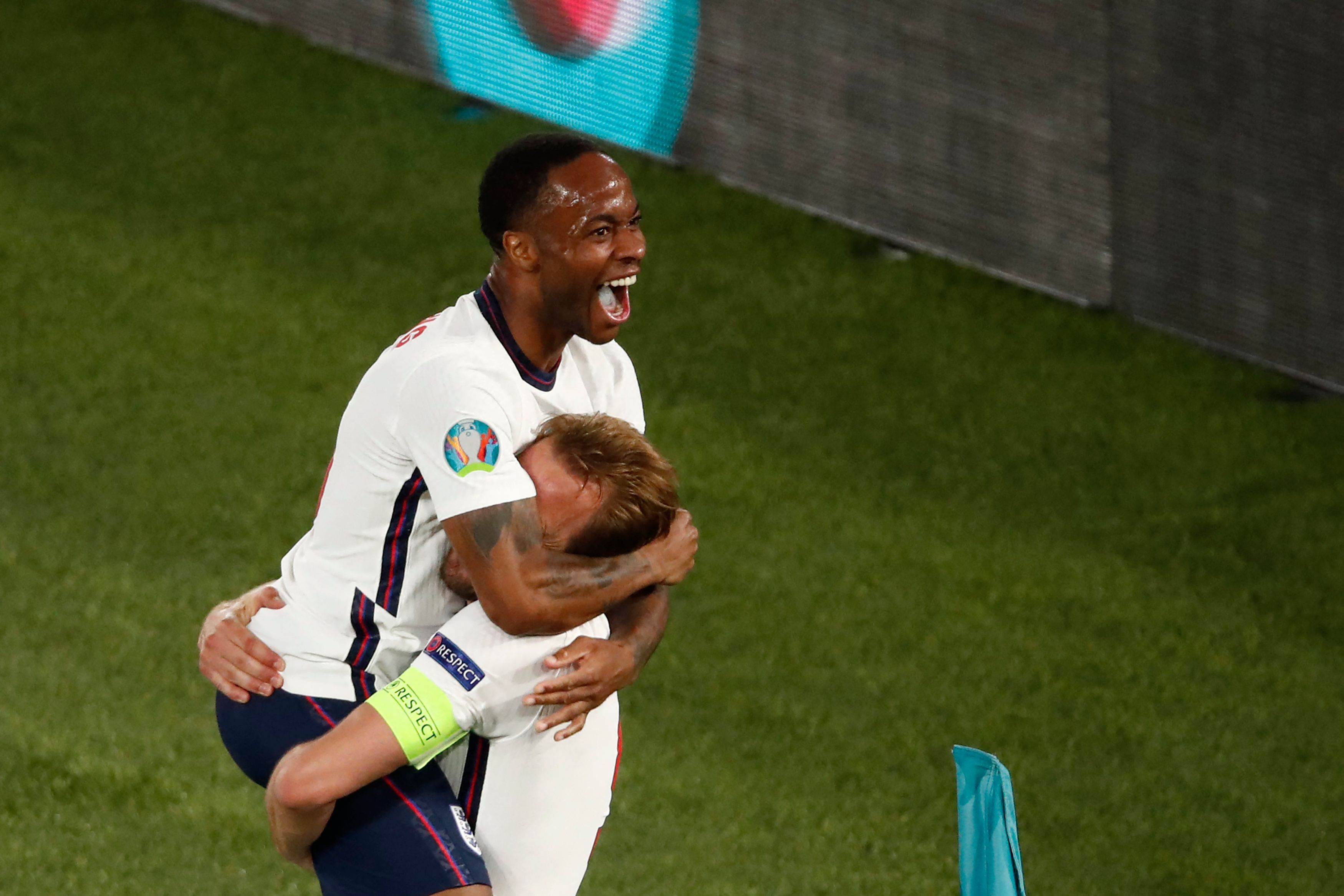 Demanded the ball early and made the vital difference finding Kane for the opening goal.

Unstoppable at times and looks to have gone up a level in this tournament. Wonderful flick released Shaw to cross for the third. Brilliant. STAR MAN 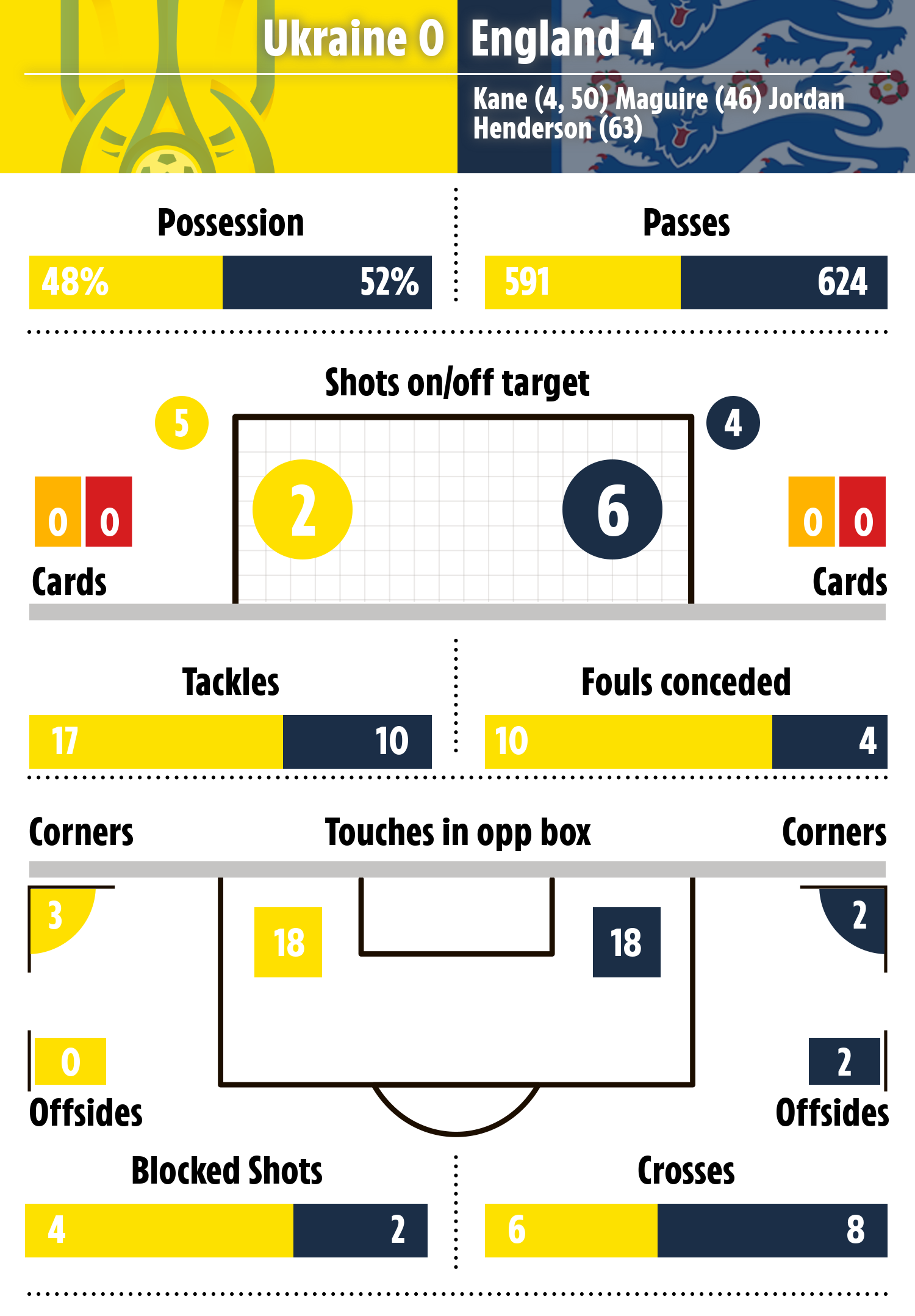 JORDAN HENDERSON (on for Rice, 57) – Took over the dominance in midfield, and deserved headed goal for this character in returning to fitness. 7

KIERAN TRIPPIER (on for Shaw 65)  Brought on to keep it tight, and did just that. 6

MARCUS RASHFORD (on for Sterling 65) Injected pace down the left and set about making an impact, trying to prove himself to manager.  7

JUDE BELLINGHAM (on for Phillips 65) Oozes quality and calm whenever he is on the pitch. 6

DOMINIC CALVERT-LEWIN (on for Kane 73) Much needed run-out but little chance to threaten. 6