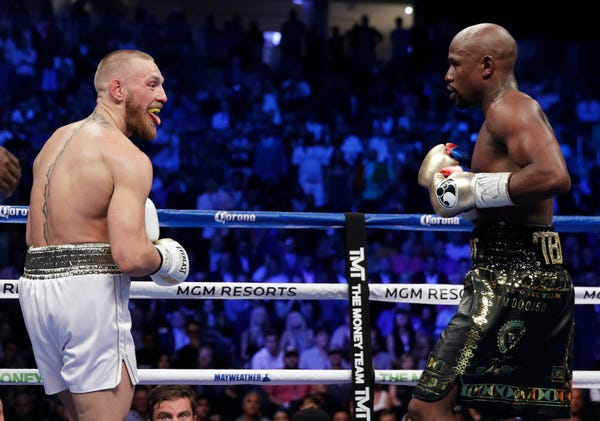 Floyd Mayweather is sharper now than he was when he beat Conor McGregor three years ago and he could even be preparing for a rematch, a sparring partner said.

Boxing great Mayweather has already beaten the former two-weight UFC champion McGregor once, in a 2017 bout where he stopped the Irishman on his feet in the 10th round.

Mayweather has since retired, returned to the ring for a New Year's Eve exhibition against Tenshin Nasukawa in 2018, and has consistently teased another comeback — one which could earn him $100 million.

Denis Douglin, who trains at the Mayweather Boxing Club in Las Vegas, even said this week that Mayweather himself is in the gym and working-out as if he were getting ready for a bout.

"Yes … I think he could come back," Douglin told Vegas Insider after sparring with the former champ.

Douglin told the sports betting website that Mayweather entered the gym all excited, told him that he was going to beat him up, and that they proceeded to spar without a break for 30 minutes.

The session was so good, Douglin said, adding that Mayweather seems sharper than the last time they sparred.

"The last time we sparred was probably three years ago for his exhibition match in Asia [against Nasukawa] and I kind of felt like he was slowing down a little bit.

"This time he felt sharp, he felt strong, his stamina was great. It was almost like he's getting better."

The super middleweight said he would not be surprised to see Mayweather take part in more exhibitions, like he did against Nasukawa, or even box against top tier mixed martial artists.

"I think he's going to fight UFC guys," Douglin said. "It's actually quite interesting because I'm left-handed and McGregor and Khabib [Nurmagomedov] are both left-handed, so him choosing to spar me, that might be the reason why.

"That's something someone said to me the other day and I was like, you know what, that makes sense, so it's very possible.

"The Conor McGregor fight generated so much money, why not do something like that again or fight another UFC fighter if he's making millions of dollars?"

09/09/2020 Sport Comments Off on Floyd Mayweather is sharper now than the year he beat Conor McGregor, a sparring partner said
Lifestyle