The Federal Government has asked the Australian Olympic Federation to boycott the Moscow Olympics. 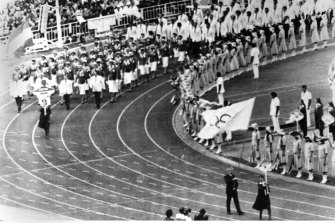 Athletes march into Lenin Stadium during the opening ceremony of the 1980 Moscow Olympics.Credit:AP

The Prime Minister, Mr. Fraser, has written to the federation seeking its support for a boycott by independent nations if Soviet troops remain in Afghanistan.

He said the Government shared the view of President Carter that if the Russians stayed in Afghanistan Moscow would become an unsuitable site for the Olympics.

But, unlike President Carter, Mr. Fraser did not set a one-month deadline for the withdrawal of Soviet troops.

“Certain things will unfold within a certain time scale and obviously the matter will be examined later,” he said. 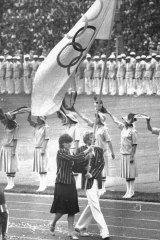 The Australian team carry the Olympic flag during the Opening Ceremony.Credit:Russell McPhedran

The Olympic Federation president, Mr. Syd Grange, said last night the federation had to put its loyalty to Australia and the wishes of the Government above other things.

The federation’s executive will meet this week to consider the Government’s request.

A special conference of the full federation early next month will decide if Australia sends a team to Moscow.

Mr. Fraser said the Government would this week hand over the final $500,000 of its $700,000 pledge to the Olympic appeal, because the Government wanted the money to be used to give Australian athletes the chance to pursue their excellence in sport and engage in peaceful competition with sportsmen of other countries.

The secretary-general of the Australian Olympic Federation, Mr. Judy Patching, said last night that everything possible should be done to ensure that the Olympic Games went ahead.

Mr. Patching said he understood the responsibilities of the Government, but the committee would not make a decision until Olympic administrations in the United States, Britain and Canada decided.

Mr. Fraser’s announcement followed a statement from the Opposition Leader, Mr. Hayden, warning the Government against precipitate action on a boycott.

Mr. Hayden said: “An effective boycott of the Moscow Olympics undoubtedly would be a major psychological weapon against the Soviet Union.”

But the effectiveness of such action would depend on agreement from a decisive majority of nations not to attend the Games. 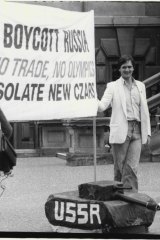 A solitary demonstrator by his banner, in Sydney in 1980.

“It is the number of nations involved, not the strength – either political or sporting – of boycotting nations that is the decisive factor,” he said.

Mr. Fraser also issued a “warning and a plea” to Australians when he announced the Government’s decision.

“Please do not treat the Olympic Games itself as the issue,” he said.

“The issue is the Soviet invasion of Afghanistan and that is the thing that is important, that is the kind of thing we want to see is not repeated and cannot be repeated around the world, and so the Olympic Games, as events have turned out, have a relationship to that.

Mr. Fraser dampened speculation that his trip to the United States and Britain would lead to further Australian sanctions against the Soviet Union.

“Andrew Peacock is not going to South-East Asia and India and Pakistan, and I am not going to the US and the UK with any grand design or a plan to put,” he said.

“We are going to achieve an exchange of ideas by helping to build a consensus amongst all of those who want to support the independence of States.”

The Government backed the transfer of the Games to another site or sites, or cancellation for this year. 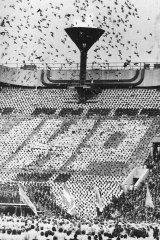 A flock of pigeons are released after the Olympic flame is ignited by Sergei Belov at the Opening CeremonyCredit:Russell McPhedran

Australia would also support the Games being held permanently in Greece if Olympic committees around the world backed the proposal. It would support the relocation in Greece with an “appropriate financial contribution.”

Mr. Grange was “greatly disappointed” that a boycott would have to be considered.

“If the major sporting countries also agree to a boycott, it must certainly cast doubts on the whole future of the Olympic Games as we know them,” he said.

Meanwhile, President Carter’s campaign for a boycott of the Olympics is meeting with a mixed international reception.

Despite more than 100 personal messages sent by the President to Heads of Government, the US State Department has had only about 50 replies.

Positive reaction came from about a dozen Middle Eastern countries, while the Europeans were said to be hedging.

Despite intense pressure from the Fraser Government and many sporting administrators and commentators the AOC decided, in a split vote, to attend the games. However, some sport federations and athletes were pressured into boycotting the Games of their own volition.

In protest of the Afghanistan invasion, the Australian team did not march behind its flag at the Opening Ceremony, instead opting for the Olympic flag.

Related posts:
20/01/2020 Sport Comments Off on From the Archives, 1980: Government urges the AOC to boycott Moscow Olympics
Lifestyle