The Premier League’s inaugural winter break concluded with Liverpool 25 points clear at the top of the table after a 1-0 victory over bottom side Norwich.

Chelsea were denied twice by VAR as Manchester United closed in on the Champions League places with a controversial 2-0 win at Stamford Bridge.

Tottenham scored a late winner at Villa Park to take all three points against Aston Villa,while Arsenal hit four past Newcastle to claim only their seventh league win of the season.

Burnley’s 2-1 win at Southampton saw their European hopes boosted as they moved up to 10th but Wolves couldn’t close the gap on the top four, drawing 0-0 with 10-man Leicester.

Sheffield United came from behind to earn a dramatic win over Bournemouth,while Everton stretched their unbeaten run to five games with a 3-1 win at home to Crystal Palace.

Elsewhere, Watford missed the chance to move out of the relegation zone as Adrian Mariappa’s own goal gifted Brighton a draw.

Here’s my team of the week (well, two weeks in this case) – have a read and then select your own below. 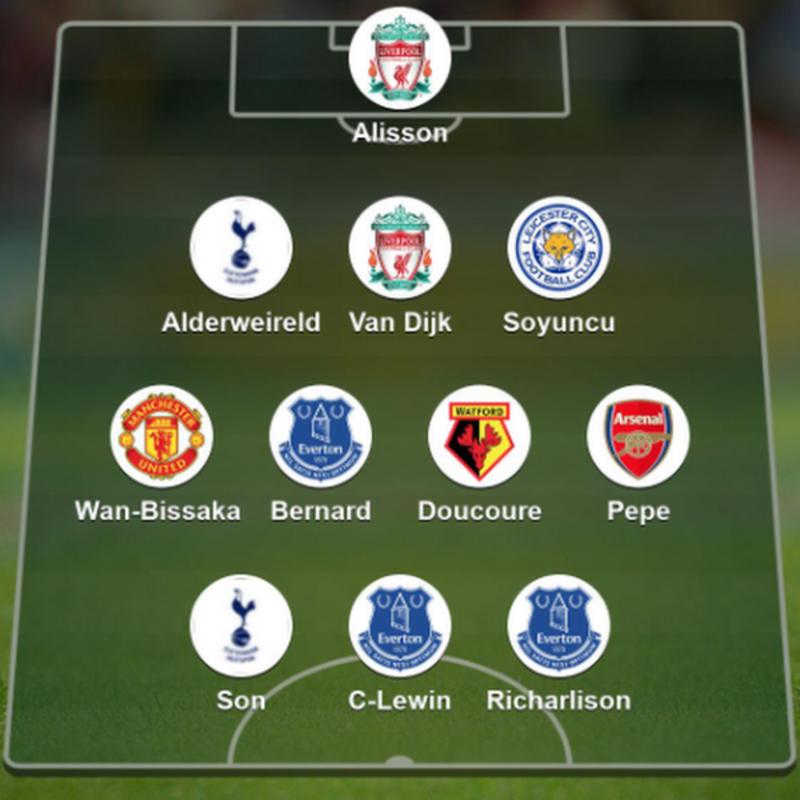 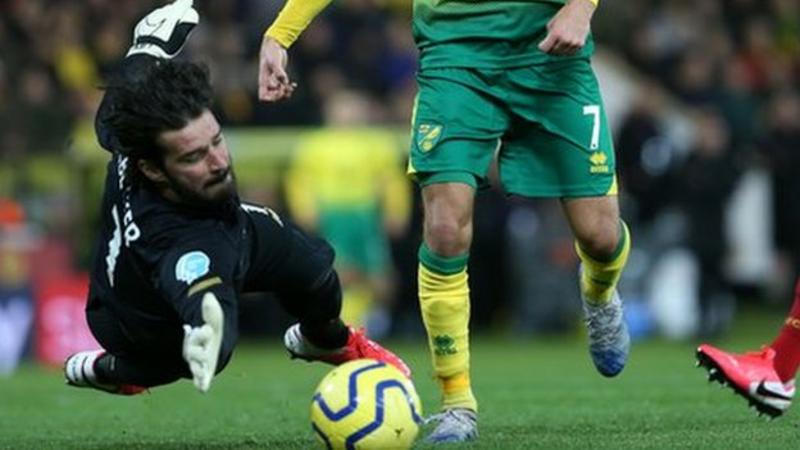 No matter how good any defence may be, I am of the firm opinion that to win the title a team needs to have a top-class keeper. In Liverpool’s case I think Alisson is world class.

That was never better illustrated than when Norwich’s Lukas Rupp had beaten Liverpool’s offside trap and was through on goal. Alisson held his ground brilliantly and forced Rupp to lose his nerve, failing to either shoot or deliver a suitable pass for Teemu Pukki to score, and leaving Allison to intercept. It kept Liverpool’s clean sheet – and their unbeaten streak – intact.

Did you know? Against Norwich, Alisson kept his 10th Premier League clean sheet of the season, more than any other keeper. 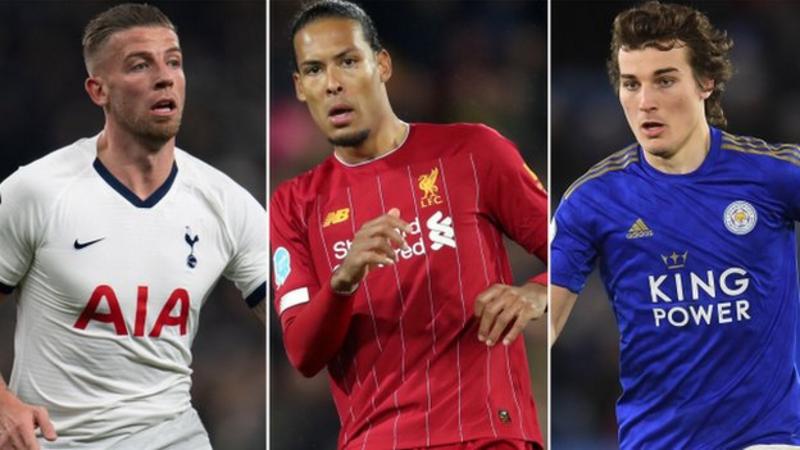 Toby Alderweireld: In the absence of a clean sheet, and having put the ball in the back of your own net, you have got to do something pretty spectacular to still get in my team of the week. Well, Toby Alderweireld did exactly that. The way the defender swivelled in the opposition’s penalty area and finished all in one move was absolutely sensational. At that moment the Belgium international looked more like a striker than a central defender.

As for the own goal I wasn’t entirely sure it was all Alderweireld’s fault – especially after the look he gave keeper Hugo Lloris. I would be very interested to know what words were shared between them at half-time.

Did you know? No Spurs player made more blocks against Aston Villa than Alderweireld (3), while only Davinson Sanchez (7) made more clearances for Spurs than the Belgian (6).

Virgil van Dijk: If you need any evidence of just how concerned defences are with the presence of Virgil van Dijk in the opposition penalty area these days, then you only have to look at the way Rupp and Pukki dealt with the Dutchman on set plays. There was one moment when there was a case for an assault on Van Dijk as both Norwich players seemed to wrestle the Liverpool defender to the ground.

What I am not entirely sure about is whether the referee was deliberately refusing to acknowledge what had taken place in the penalty area, which is the ref’s prerogative, or he simply didn’t see it, in which case VAR gets involved? If not, what’s the point of it?

Did you know? Virgil van Dijk played more successful passes than any other player in Norwich v Liverpool (77), while the Dutchman also won all three of his aerial duels.

Caglar Soyuncu: There might be an argument that if Wolves forward Raul Jimenez had taken his chances, then Soyuncu would not have been in my team of the week. That may be true, but fortune favours the brave and Soyuncu threw himself at Jimenez in the final minutes to help Leicester earn a point.

The Turkey international, along with Jonny Evans, defended superbly – and with 10 men in the end. Wolves manager Nuno Espirito Santo expressed exasperation with VAR and maintained that fans are getting increasingly frustrated with the technology, especially when a goal is disallowed and a player has not taken any clear advantage. Great point.

Did you know? Soyuncu completed 97% of his passes against Wolves (58/62), the best rate of any player who started the match. 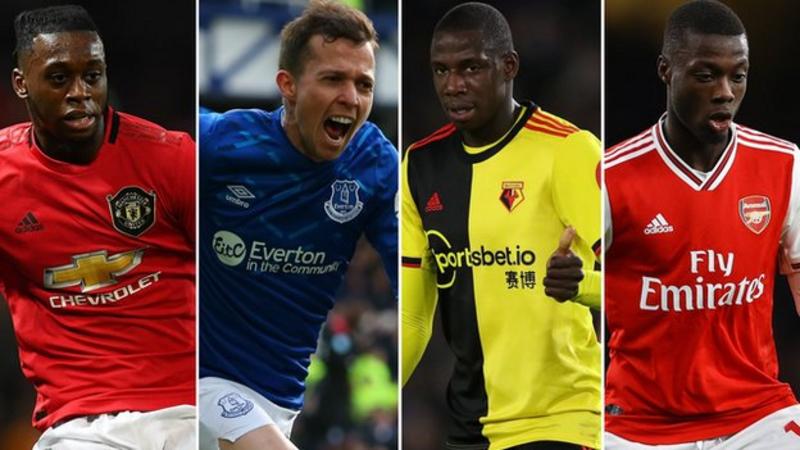 Aaron Wan-Bissaka: If ever a game was full of errors by the officials, then Chelsea v Manchester United was it. Should Harry Maguire have been on the pitch? Not in my book and that’s the reason he’s not in my team of the week. And why Fred wasn’t judged to have pushed Azpilicueta, who in turn pushed Brandon Williams, when Chelsea’s goal was disallowed I will never know.

The only speck of genuine quality in an otherwise ordinary match was Wan-Bissaka’s wonderful cross for Anthony Martial to score. Wan-Bissaka was also responsible for the most fantastic block on Pedro. The former Crystal Palace defender is starting to look a much better player with the ball at his feet.

Did you know? Wan-Bissaka has two assists this season and needs one more to match his tally of three with Crystal Palace in 2018-19.

Bernard: If you’re going to make your 50th appearance memorable, then why not do it with a glorious finish. The ball from Theo Walcott was superb but the goal by Bernard against Crystal Palace was an exquisitely taken side-foot volley. Interestingly enough, the Brazilian’s recent performances are in tandem with Everton’s resurgence in form.

As for Palace, it must have been a relief for Roy Hodgson to see striker Christian Benteke back on the score sheet after nine months. Such a period must have been agonising for the Belgian. I’ve known professional footballers who have had shorter jail sentences.

Did you know? Bernard scored his third Premier League goal of the season, with all three of them the opening goal in the match.

Abdoulaye Doucoure: I said some months ago that this lad should be scoring more goals with his ability. However, when he does score they tend to be real beauties – and the one against Brighton was no exception. But for those who think I only pick goal scorers and do not concentrate on performances, think again. Doucoure was the player who chased Aaron Mooy 20 yards and forced the Australia international into an error, allowing Watford to take possession.

With almost half the pitch between Doucoure and the Brighton goal the Frenchman planted the most superb strike past Mat Ryan, with five Brighton players closing in. This lad can play and if Watford were to go down he is worth £30m of anyone’s money in today’s market.

Did you know? Doucoure was involved in 60% of Watford’s 5 shots against Brighton (2 shots, 1 chance created).

Nicolas Pepe: We’ve had to wait a little while for this young man to feature prominently in an Arsenal shirt. However, against a Newcastle side which didn’t seem to realise that their winter break had come to an end, Pepe looked as though he had actually benefited from the seasonal interruption. For the first time it looked like the Ivorian was running the show and I must say he looked impressive.

The ball for Aubameyang to score was a beautifully flighted pass. There was also something about his game that reminded me of Liam Brady. I’m not sure if it was the way he carried himself or that left foot, but whatever it was it’s one hell of a good sign.

Did you know? Pepe was involved in three goals against Newcastle (1 goal, 2 assists), as many as he had been in his previous 13 Premier League appearances (2 goals, 1 assist). 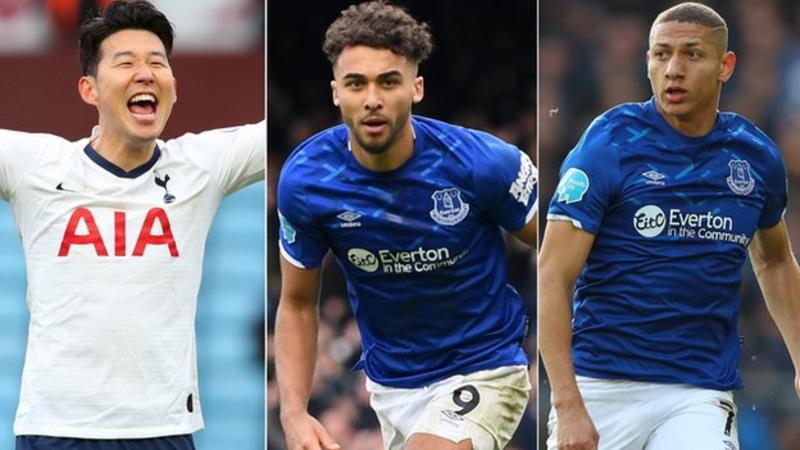 Son Heung-min: While Son’s first goal was shrouded in controversy, there is no doubt in my mind that his second against a quite rightly aggrieved Aston Villa was of the highest quality. Since the injury to Harry Kane, Tottenham’s reliance on Son has rocketed.

The player’s response to such demands, not to mention pressure, has been immense. As for his first, when he knocked home the rebound after his penalty was saved, referee Martin Atkinson was signalling for a goal kick – but VAR insisted it was a penalty. Remind me, who is actually in charge of the football match?

Dominic Calvert-Lewin: The more I see this kid the more I like him. I must confess there was one stage I didn’t think he had enough for the Premier League but he clearly must be an intelligent lad who listens. Since Duncan Ferguson’s temporary involvement in first-team selection, Calvert-Lewin’s game has exploded. However, under Carlo Ancelotti the 22-year-old is starting to look much more composed, especially in front of goal.

His finish against Crystal Palace was a perfect example. The header from Richarlison beats everyone except the post, but Calvert-Lewin turns 180 degrees to position himself perfectly, doesn’t panic and converts the rebound. Those finishes only look easy for those who have never done it.

Did you know? Against Crystal Palace, Dominic Calvert-Lewin both scored and assisted in the same Premier League game for the first time since December 2017 (v Huddersfield).

Richarlison: From the moment Richarlison raced on to the headed flick-on from Calvert-Lewin, the Brazilian looked like he had only one thing on his mind. With three Palace players in pursuit the Everton striker looked up, took aim and bent the ball around Vicente Guaita.

Under Carlo Ancelotti, Richarlison’s performances appear much more focused than they were under Marco Silva, and he has more freedom for expression than under Duncan Ferguson. Three months ago I would have said a top-four place was out of the question for the Toffees. Now I’m not entirely sure.

Did you know? Richarlison had more shots (5) and more shots on target (3) than any other player in Everton’s 3-1 win over Crystal Palace.

You’ve seen my selections this week. But who would you go for?

The Crooks of the Matter

When I first saw it I thought it was a joke. And no doubt Premier League referee Jon Moss did so too, I would have thought. So, let me get this right. Bournemouth midfielder Dan Gosling seems to suggest that Moss showed “zero respect” and was a “disgrace” for making “sarky comments” about their league position? Is Gosling serious?

Have you seen the way professional footballers jostle, interrogate and abuse officials with impunity these days? And Gosling gets upset because the referee made a ‘sarky’ comment about Bournemouth’s league position. Has he no shame? I don’t know what I find more irritating; the thin nature of Gosling’s skin or the fact the player’s comments have actually been taken seriously and landed Moss in the dock.

Some of the comments shared between officials and players have, since the game began, been inscribed in football folklore. In fact the late Neil Midgley booked me in an FA Cup tie for glaring at him (I admit it was with utter contempt) when he appeared to have made a mistake over a decision. I said to him, as he asked me for my name: “I’ve never been booked before for giving a referee a black look!” Midgely stooped down, as though he was tying his boot so to hide his face so no-one could see him laughing.

It took him a full 15 seconds to regain his composure. The point being exchanges between players and officials have always been commonplace but only in extreme circumstances are they ever reported. And this case involving Gosling and Moss is certainly not one of them.