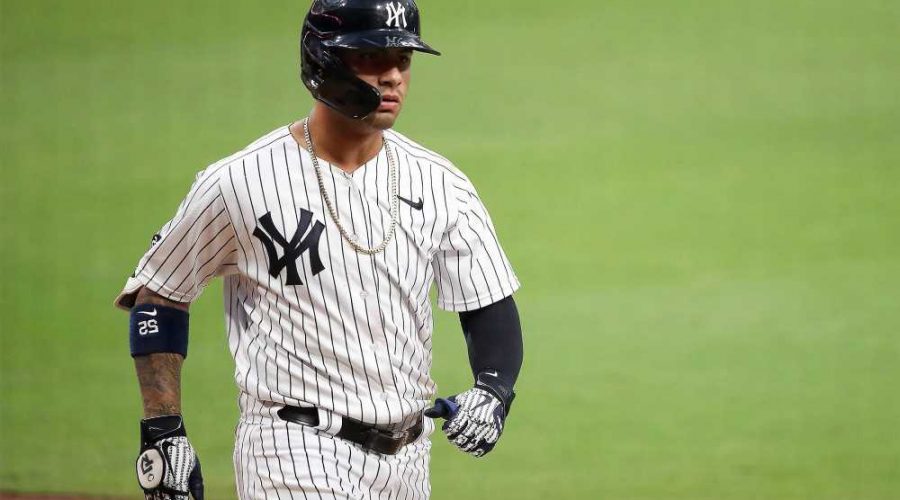 Yankees' lack of home runs, not small ball, is the problem

There's no excuse for Yankees to look this broken

If it’s challenging to elect a poster boy for this horrid Yankees April, so widespread is the malfunction, Gleyber Torres sure has put up quite a case.

First fielding, then hitting and now baserunning? You must see it to believe it.

The Yankees’ 4-1 loss to the Braves at Yankee Stadium, their sixth loss in seven games, dropped them to 6-11 on this young season, and it took a village to record such a hellacious effort against an Atlanta team missing its best player Ronald Acuña Jr.

Yet Torres, the shortstop whose defense actually has improved lately, took some postgame heat from manager Aaron Boone for not running hard at all after his seventh-inning, check-swing number went a few feet in front of home plate. Travis d’Arnaud easily threw him out at first base

“I think any time you’ve got that kind of situation where a guy’s got to get off the mound, you’ve got to get after it,” Boone said. “I think initially, the check swing, probably in his mind it’s a foul ball right. Then it’s like, ‘Oh, no, I’ve got to get going,’ then you’re a little late. That’s got to be a little bit better obviously.”

The manager said he would speak to his young player, though he hadn’t when Torres entered the Zoom room and took responsibility for his inaction.

“Yeah, it was a check swing, and in the moment, really, I didn’t know if it was fair or foul. I didn’t see the ball really well,” Torres said. “I feel like I started running late, I feel like I can put a little more effort running to first base.”

There are times when hustle is overrated, yet this was not one of them, not with the Yankees starving for runs. Asked if his lack of effort resulted from frustration, Torres said, “For sure.”

Frustration dominates every corner of this Yankees season, and it has proven to be an absolutely dreadful start of the season for the 24-year-old Torres, who owns a .186/.294/.220 slash line.

“Horrific situational hitting,” one scout from another club observed of Torres, on the condition of anonymity. “Totally reliant on hitting home runs.”

That’s a tough approach when you have zero home runs and one RBI through your team’s first 17 games.

“I want to help my team and I’m not doing a very good job right now when I go to home plate,” Torres said.

“I’m not worried about him long-term offensively because I feel like there have been more than even moments where I’ve seen Gleyber, I feel like, ready to break out,” Boone said before the game. “He just hasn’t.”

According to MLB Savant, Torres’ chase contact actually had decreased to 16.3 percent from last year’s 20.1 percent through Tuesday’s action. His biggest shortcoming had been a lack of “banging,” to use a favorite Boone term. His average exit velocity had dropped by 5 mph, from 88.6 to 83.6, despite his barrel percentage more than doubling, from 3.7 percent to 7.5 percent.

Boone hasn’t deemed it necessary to “bench” Torres, even for a day, as he did Clint Frazier and Aaron Hicks on Tuesday, though he did rest April 13 against the Blue Jays in Dunedin, Fla. We’ve seen enough from Torres the prior three years, including 2020 (which marked his worst season), to know how much better he can be than the awful brand of baseball he’s currently playing.

“I do think he’s pretty resilient,” Boone said of Torres, who then proceeded to earn himself a scolding from his skipper.

Said Torres afterward: “It’s not how you start. It’s just how you finish.”

Surely, the finish can’t get any worse than the start, can it? Yeesh.