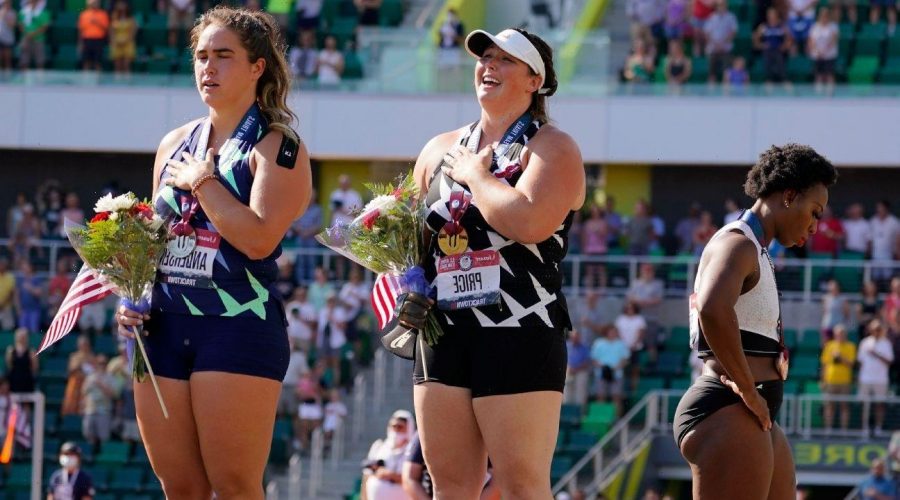 EUGENE, Ore. — Hammer thrower Gwen Berry placed her left hand on her hip and took a quarter-turn so she was facing the stands, not the flag, while the national anthem played.

Toward the end of the song, she plucked up her black T-shirt with the words “Activist Athlete” emblazoned on the front, and draped it over her head.

The third step of the medals podium drew as much attention as anything on the track on a blazing-hot Saturday at U.S. Olympic trials.

DeAnna Price won the event with a throw of 263 feet, 6 inches (80.31 meters), which was nearly 7 feet longer than Berry’s throw. Price broke the meet record on four of her six throws, and the last two of those throws also broke the American record. She became only the second woman in history to crack 80 meters. The world record belongs to Anita Wlodarczyk, who is expected to be in Japan.

Second place belonged to Brooke Andersen, while Berry grabbed the third spot by a scant 2 inches over Janee Kassanavoid. Berry, heading to her second Olympics, has promised to use her position in Tokyo to keep raising awareness about social injustices in her home country.

That Berry was front and center during the anthem was a matter of happenstance. Unlike the Olympics, they don’t play anthems to accompany medals ceremonies at the trials. But the hammer throwers received their awards just before the start of the evening session, which has been kicking off all week with a videotaped rendition of “The Star-Spangled Banner.”

And so, while Price and Andersen stood still with their hands over the hearts and looked at the American and Oregon flags waving on the north end of Hayward Field, Berry fidgeted and paced on the third step. Then turned away. And finally grabbed her T-shirt.

All of it drew virtually no reaction from the still-filling stands. And the gesture was something far less than two summers ago, when Berry raised her fist on the podium after winning the Pan-Am Games.

That demonstration led to a sanction, but ultimately pushed the U.S. Olympic and Paralympic Committee to commit to not punishing athletes who raise fists or kneel at the trials or in Tokyo. It’s a potential flash point for Tokyo, where the IOC has said it will enforce its Rule 50 that bans demonstrations inside the lines. It’s the same prohibition that got sprinters Tommie Smith and John Carlos sent home from the Mexico City Games in 1968.