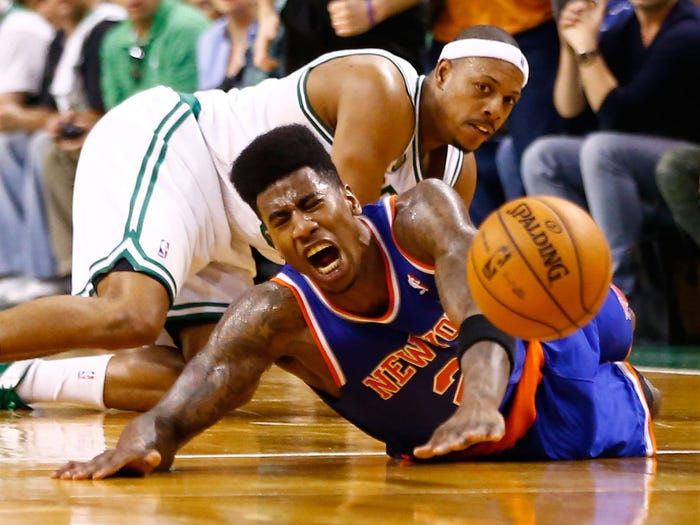 Iman Shumpert wasn't even in the league yet when his first NBA rivalry began to take form.

The 6-foot-5 guard — who played for five different teams over his 10-year NBA career — joined the New York Knicks as their first-round draft pick in 2011. However, long before then, he had developed a distaste for Boston Celtics legend Paul Pierce.

In an interview with Uninterrupted, Shumpert recalled sitting courtside at a Bulls-Celtics game with his aunt when he was just a kid. He remembered "having tears in my eyes" because he was so excited to be seated so close to the action at an NBA game. When halftime came, Shumpert was eager to high-five some of the stars as they headed back to the locker room, but Pierce was having none of it.

"Paul Pierce comes by. He ain't dap me," Shumpert said, shaking his head. "And he sort of like, looked at me wrong. Like he just looked at me mean."

"And my first impression of Paul Pierce was all like 'When I get here, I got something for you,'" he added. "'Like, for you, specifically.'"

Shumpert made good on his promise. He spent years battling "The Truth" in the Eastern Conference, most famously when Shumpert played for the Knicks and Pierce played in Boston. But once, after Pierce took his talents to the Brooklyn Nets in the twilight of his career, Shumpert broke the 2021 Hall of Fame nominee's ankles with a vicious crossover that sent him to the floor.

"If you fast forward, I did make him fall before," Shumpert told Uninterrupted, smiling. "Auntie, I lived up to that."

Check out the full Uninterrupted clip below: