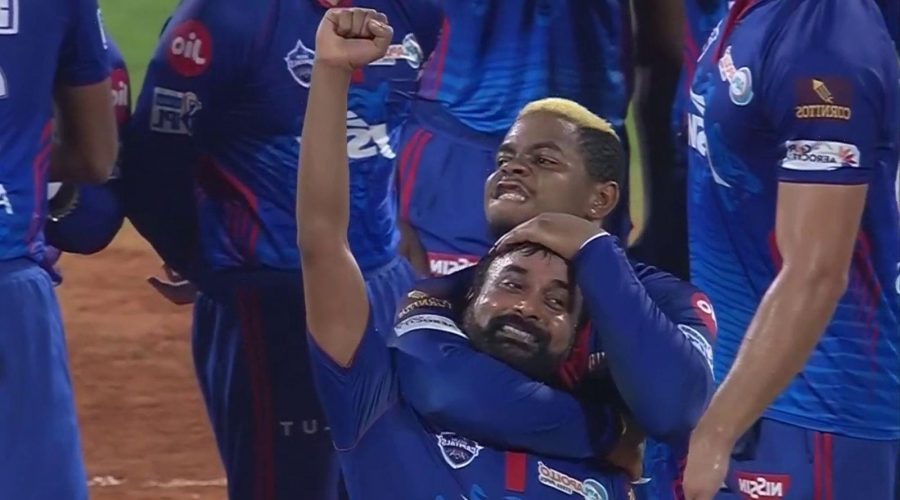 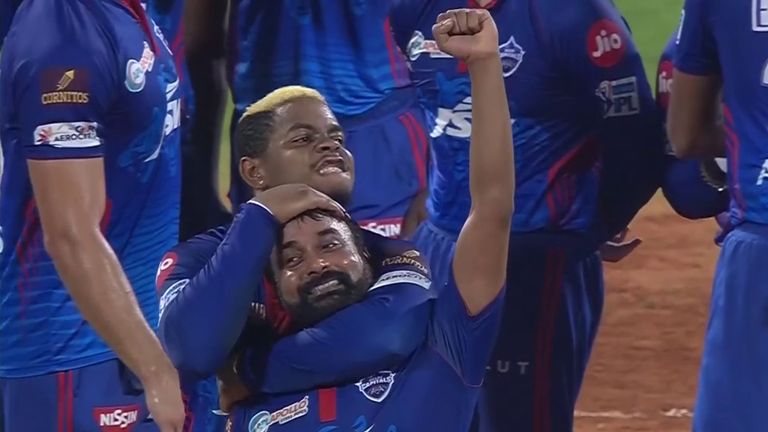 Delhi Capitals held their nerve to beat Mumbai Indians by six wickets in a low-scoring thriller in Chennai in the Indian Premier League.

In the repeat of last year’s final, Delhi chased down 139 in the final over to gain some sort of revenge over five-time IPL champions Mumbai as leg-spinner Amit Mishra starred, taking 4-24.

Opener Rohit Sharma (44 from 30 balls) top-scored for Mumbai but they failed to kick on after a positive start as the Delhi spinners took hold and were restricted to 137-9.

The chase looked to be going down to the wire and after Shikhar Dhawan (45 from 42) and Steve Smith (33 from 29) set the foundations, Shimron Hetymer (14no from 9) got the Capitals over the line with five balls to spare.

Having chosen to bat first, Mumbai recovered from losing Quinton de Kock (2) early as Rohit smashed Kagiso Rabada for a huge six over long off to help the defending champions to 55-1 at the end of the powerplay.

A remarkable shot from Rohit Sharma as he smashes KG Rabada high over long off – a 95m six! #IPL2021

Suryakumar Yadav (24 from 15) fell to Avesh Khan in the seventh over but it was the reintroduction of Mishra, who had been expensive in his one powerplay over, that really turned the tide in Delhi’s favour.

Rohit had quickly moved into the 40s with three fours and three sixes but fell trying to hit the leg-spinner over the top, picking out Smith at long on. Two balls later Hardik Pandya repeated the trick as he departed for a golden duck.

Krunal Pandya (1) was bowled by Lalit Yadav (1-17), a maiden IPL wicket for the off-spinner, before Mishra claimed his third with a superb googly that trapped Kieron Pollard (2) plumb in front as Mumbai found themselves 84-6 having been 67-1 five overs earlier.

Amit Mishra has now dismissed Rohit Sharma seven times in the IPL, more than any other bowler in the competition's history. #IPL2021

Ishan Kishan had watched four of the five wickets fall from the non-striker’s end and set about rebuilding the innings with Jayant Yadav; the pair added 39 but Kishan (26 from 28) chopped on to give Mishra his fourth just as Mumbai would have hoped to accelerate.

Delhi had a stroke of luck in the first over of their reply when the third umpire adjudged that Hardik Pandya had grassed the ball when diving forward to take a good catch that would have removed the in-form Dhawan.

Prithvi Shaw (7) had no such luck in the next, though, as Jayant safely pouched a return catch.

With a relatively low total to chase, Smith came in and alongside Dhawan, took a more cautious approach, working the singles rather than try to force boundaries to guide Delhi through the powerplay for no further loss.

The approach remained the same, although it was a pair of boundaries from Smith (33 from 29) that brought up the 50 partnership in the ninth over before it was ended at 53 as Pollard got the Australian lbw in the next.

Dhawan (45 from 42) and Lalit held back for the next few overs before the opener came out firing after the strategic timeout, hitting Chahar (1-29) for a six and a four to put Delhi in a strong position, only to hole out later in the over.

Delhi were edging closer after a streaky boundary from Lalit but lost their captain when Rishabh Pant (7) miscued a ramp shot off Jasprit Bumrah in the 17th over with 23 still needed.

Hetmyer came in and hit his first ball for four over extra cover and as the game headed for a tense finale, Delhi were helped by two front-foot no-balls from Bumrah in the penultimate over.

That meant they needed just five from the last and after Hetmyer slashed Pollard’s first ball away for four, another no-ball sealed the win for the Capitals, who moved level on points with leaders Royal Challengers Bangalore.

20/04/2021 Sport Comments Off on IPL: Delhi Capitals hold on for nervy win over Mumbai Indians to avenge defeat in 2020 final
Lifestyle