American artistic swimmer Anita Alvarez has been rescued by her coach at the FINA World Championships after losing consciousness during her routine and sinking to the bottom of the pool.

A major tragedy was avoided in Budapest on Wednesday thanks to some quick thinking from American coach Andrea Fuentes. 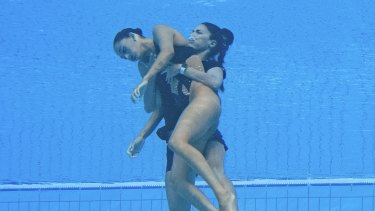 Artistic swimmer Anita Alvarez loses consciousness in the pool at the FINA World Championships in Budapest.Credit:AFP

Alvarez was competing in the solo free final – an artistic swimming event – when she fainted and began dropping to the bottom of the pool.

Fuentes, watching the routine unfold, jumped into the pool as quick as she could to rescue the 25-year-old.

Remarkably, Fuentes beat the lifeguard into the pool. The moment was captured by poolside photographers.

“It was a big scare. I had to jump in because the lifeguards weren’t doing it,” Fuentes said in an interview with Spanish publication MARCA. “I was scared because I saw she wasn’t breathing, but now she is doing very well.” 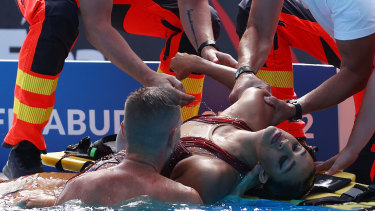 Anita Alvarez is pulled from the pool. Credit:Getty

“Anita is okay. The doctors checked all vitals and everything is normal: heart rate, oxygen, sugar levels, blood pressure … all is okay,” Fuentes wrote. “We sometimes forget that this happens in other high-endurance sports. Marathon, cycling, cross-country … we all have seen images where some athletes don’t make it to the finish line and others help them to get there.

“Our sport is no different than others, just in a pool. We push through limits and sometimes we find them. Anita feels good now and the doctors also say she is okay.

“Tomorrow she will rest all day and will decide with the doctor if she can swim free team finals or not. Thank you for all of your well wishes for Anita.” 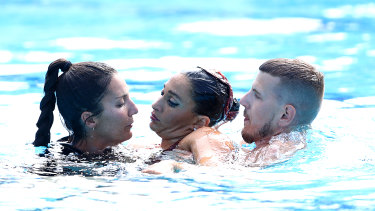 Alvarez is attended to by medical staff. Credit:Getty

23/06/2022 Sport Comments Off on ‘It was a big scare’: Artistic swimmer faints in pool, rescued by coach
Lifestyle