James Anderson has become the first fast bowler – and only the fourth bowler in cricket history – to take 600 Test wickets.

The 38-year-old England paceman achieved that coveted landmark when he dismissed Pakistan captain Azhar Ali on day five of the third #raisethebat Test against Pakistan. 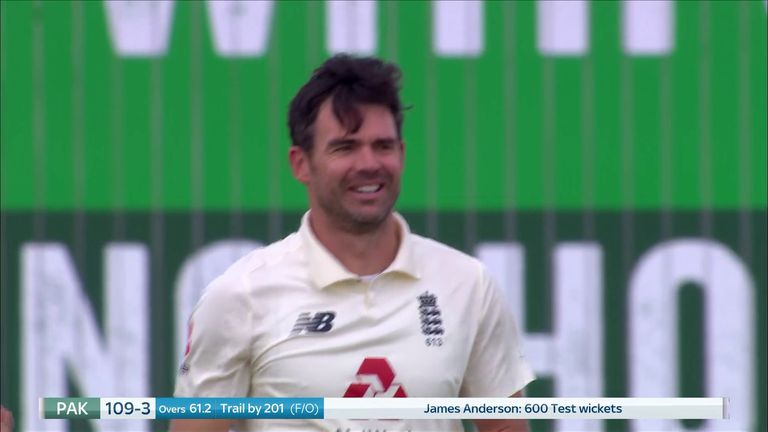 Spin trio Muttiah Muralitharan, Shane Warne and Anil Kumble are now the only three bowlers in the world with more Test scalps to their name than Anderson, who has also claimed more five-wicket hauls at the top level – 29 – than anyone else.

He was raw, he was unconventional and he was wayward at times, but boy was he exciting to watch!

Anderson had only played three one-day games for Lancashire when, as a 20-year-old, he was drafted in as a late replacement for England’s ODI tour of Australia.

Impressive performances at the World Cup followed – and, by the time the first Test of the 2003 summer came around, a lot was expected of the newly-nicknamed ‘Burnley Express’.

Anderson more than delivered on those expectations, with 5-73 against an albeit far-from-testing Zimbabwe outfit. He bowled full, fast, in-swinging yorkers, castling four of his five victims, including Mark Vermeulen to get off the mark in Test cricket.

Form and fitness had torn apart England’s troublesome trio of Steve Harmison, Andrew Flintoff and Simon Jones from the 2005 Ashes.

Harmison was still around, as was Matthew Hoggard for England’s 2008 tour to New Zealand, but the pair returned combined figures of 2-272 in the first Test defeat in Hamilton – and England moved on. Back came Anderson, along with Stuart Broad for only his second Test.

Anderson took seven wickets at Wellington, including a five-for in the first innings, and he and Broad went on to form the foundation of a golden partnership that continues to this day. 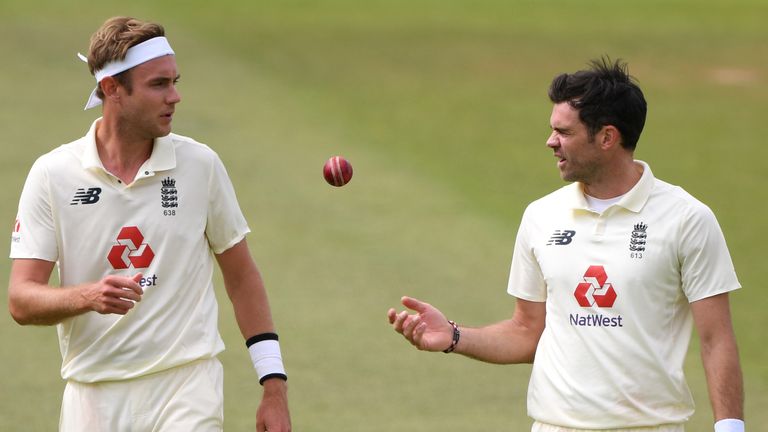 Three straight Ashes triumphs spanning 2009-2013 followed, including a first win in Australia for 24 years, while the No 1 Test ranking was also secured.

The first Test of the 2013 Ashes was a thriller, with 19-year-old Aussie Ashton Agar’s 98 on debut, Ian Bell’s first of three hundreds in the series, Broad’s lucky escape when not given out off a thick edge to first slip, and Brad Haddin’s 65-run partnership with James Pattinson.

Australia’s last-wicket pair took them to within 15 runs of victory, but up stepped Anderson – with nine wickets already in the match – to find the inside edge of Haddin’s bat through to Matt Prior.

Umpire Aleem Dar wasn’t convinced – and neither were many of the England fielders, who offered up a half-hearted appeal and belatedly reviewed the decision. The edge was confirmed, though, and Anderson led a jubilant England charge. 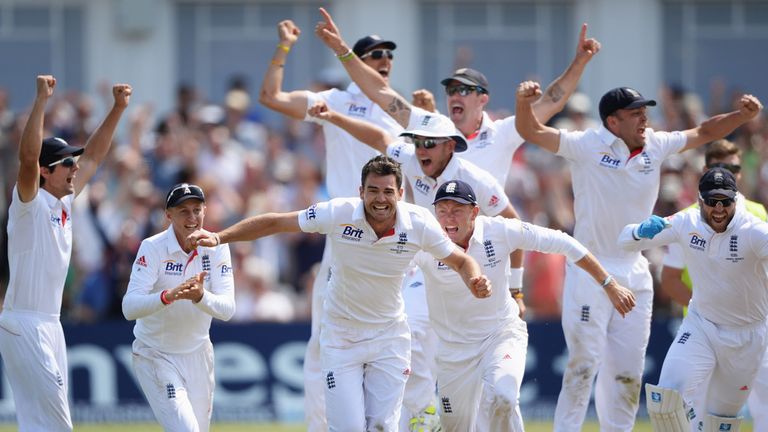 Anderson’s 10-for was his second in Tests at Trent Bridge, having bagged career-best match figures of 11-71 there against Pakistan in 2010. While his 5-54 first time around was good, he was unplayable in the second innings as he claimed 6-17 in 15 overs, with eight maidens to boot.

Alastair Cook showed safe hands in the slip cordon to take the catch, while Botham was the first to congratulate Anderson, even promising the seamer an enormous bottle of wine upon his return home!

Anderson could not inspire his country to victory at North Sound, with Jason Holder scoring a defiant hundred to ensure the game ended in a draw, but the leader of England’s pack propelled his side to a win in the next Test, in Grenada, with a quite outstanding display.

Anderson had a hand in all six wickets taken on the final morning, dismissing Kraigg Brathwaite with an absolute rip-snorter, as well as Shivnarine Chanderpaul and Marlon Samuels, before taking two crisp catches and running out Holder with a direct hit.

Anderson told an interviewer that he had “wanted to turn round and go home” when he arrived at the Headingley gates in the past, such was his record at the ground. However, three days and 10 wickets later, the Lancastrian’s feelings towards the home of Yorkshire cricket softened!

After England had made 298, Anderson came to the fore as Sri Lanka were skittled for just 91 – he had Kaushal Silva caught behind in his first spell but it was in his second that he really impressed to finish with 5-16.

If anything, Anderson stepped it up another gear in the second innings, returning figures of 5-29 as Sri Lanka were shot out for 119 to lose by an innings and 88 runs.

Delight in Leeds, then, for Anderson, coming two years after his dismissal against Sri Lanka from the penultimate ball of the match had left him in tears as England lost both the Test and the series.

Anderson had Brathwaite and Kyle Hope caught behind by Jonny Bairstow in the Windies’ first knock at Lord’s but was left stranded on 499 wickets as Ben Stokes bagged 6-22, locating the kind of swing Anderson would be proud of.

However, England’s premier paceman did not have to wait long for the milestone scalp, castling Brathwaite three overs into the tourists’ second innings.

But wicket 501 perhaps topped it – Anderson bowling Kieran Powell with a superb delivery that swung in, nipped back off the seam and dislodged the left-hander’s off-bail.

Anderson went on to complete a career-best 7-42, beating the 7-43 he had taken against New Zealand at Trent Bridge in 2008, as England won the game and the series. The seamer’s five-for was his 24th in Tests and fifth at Lord’s, with only Botham taking more five-wicket hauls at HQ.

While the series had already been decided in England’s favour, it was fitting that Anderson got to apply the finishing touch as he took over the mantle of Test cricket’s most prolific paceman from Australia’s Glenn McGrath.

Already 3-1 up against India as they arrived at The Oval for the final Test of the summer, England set about signing off in style, with centuries from Joe Root and Cook enabling them to set the tourists an unlikely victory target of 464. 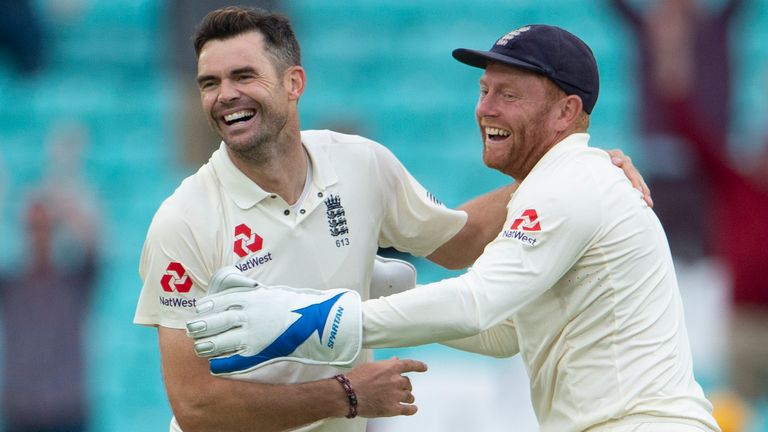 Anderson gave his side the perfect start with two wickets in four balls, dismissing Shikhar Dhawan and Cheteshwar Pujara leg before to move level with McGrath’s Test record of 563.

Although KL Rahul and Risabh Pant held England up with a 204 partnership on the final day, it was Anderson who sealed a 118-run victory by bowling last man Mohammed Shami for wicket number 564.

After Anderson’s injury nightmare in the summer of 2019 – when he missed almost all of the home Ashes series with a calf problem – many observers were asking serious questions about the veteran’s ability to continue performing at Test level.

Those doubts were emphatically dispelled in the second Test at Cape Town, with the 37-year-old spearheading England’s fightback after they had slumped to a 107-run defeat in the series opener at Centurion.