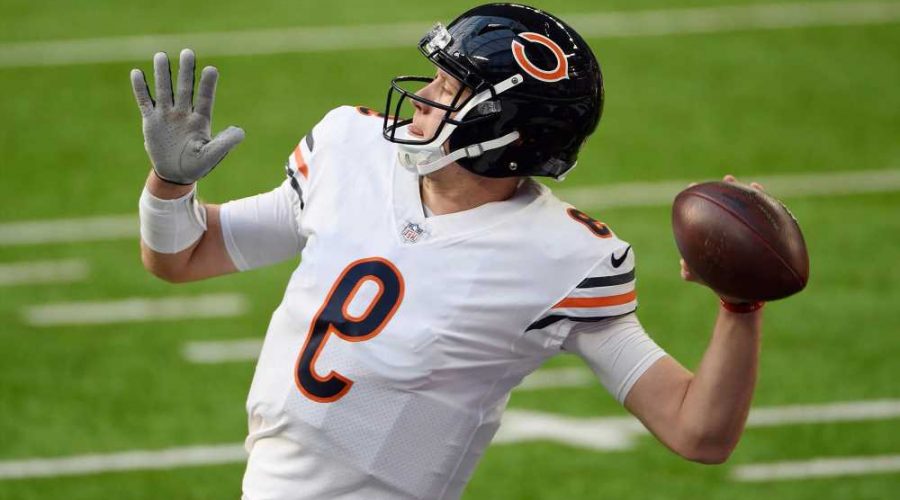 Jets have options with their only Day 2 NFL Draft pick

Bill Belichick may haunt Jets all over again

Zach Wilson primed for ‘huge burden’ awaiting him with Jets

The Jets landed their quarterback on Thursday night with the selection of BYU star Zach Wilson at No. 2 overall, then added a lineman to protect him with USC’s Alijah Vera-Tucker at No. 14. Here are some thoughts and observations on the Jets draft so far and looking ahead:

1. The Jets’ big quarterback move was taking Wilson on Thursday night. They have been targeting him for months. But another quarterback selection could have ripple effects for the Jets.

The Bears moved up to No. 11 in a trade with the Giants and took Justin Fields. Chicago now has Fields, Andy Dalton and Nick Foles in their quarterback room. That seems like a crowd to me. Foles makes sense for the Jets to acquire to be Wilson’s backup and mentor. At the moment, the Jets do not have a quarterback on the roster who has ever taken a snap in a regular-season NFL game. That is problematic. Joe Douglas needs to add someone to the group of Wilson, James Morgan and Mike White.

Douglas knows Foles from their days in Philadelphia together. Douglas has a Super Bowl ring on his finger in part because of Foles’ performance in the 2017 playoffs for the Eagles. Is Foles a good quarterback? No. But there are not many options out there at this point. The Jets had Brian Hoyer in for a visit this month, but did not sign him.

Foles has two years left on his contract and is scheduled to make $4 million this season. The Bears have already paid him a roster bonus. That is a reasonable number to pay a backup. I’m not sure the Jets would give up much for Foles, but the Bears’ asking price should not be much. The Jets have two fifth-round picks and three sixths in 2022. Could Douglas send one of those to Chicago in exchange for Foles?

Douglas also may just wait to see if the Bears cut Foles at some point and then just sign him on the cheap. Whatever he does, Douglas needs to address the backup quarterback spot at some point, and Foles makes a lot of sense.

2. I have mixed feelings about Douglas trading up to get Vera-Tucker. On one hand, I applaud his aggressiveness in moving up to get the best player at a position of need for the Jets. On the other hand, I thought having five picks in the first three rounds was huge for the Jets as they try to rebuild this roster. Now, they are down to three picks, with none in the third round.

One way the Jets could mitigate this is by trading back Friday night and turning the No. 34 overall pick into a later second-round pick and a third-rounder. If Douglas pulls that off, he should take a bow.

I think there are intriguing players available at the top of the second round for the Jets, but there are a lot of them. I think they can move back a little and still get one. They still have needs at cornerback, linebacker, running back, tight end, wide receiver and offensive line. Douglas has to find a trade partner, though, but sitting with the second pick in the round should help. Teams spend Friday sitting around looking at who is available. If someone is there they love, they be willing to deal.

3. Douglas hit the offense on Thursday night. Now, it’s time to address the defense. I get the argument for a running back in the second round, but there are some glaring holes on defense that I think Douglas needs to fill on Friday night. You can start with cornerback, where the Jets’ top three right now are Bless Austin, Bryce Hall and Javelin Guidry. The Jets prioritized the defensive line in free agency, but cornerback needs immediate help.

The Jets should also consider Notre Dame linebacker Jermiah Owusu-Koramoah. I thought the Jets might take him if they stayed at pick No. 23. He surprisingly fell out of the first round, and I think he is a nice fit for Saleh’s defense.

If the Jets are able to trade back, they could grab a defensive player in the second round and then take a running back in the third. That would be ideal.

4. Much of the pre-draft talk on Wilson has centered around the quality of opponents he faced in 2020 with BYU. Douglas had an interesting answer and comparison when asked about that:

“That’s not his fault, no more than it was Steve McNair’s fault of what Alcorn State’s schedule was when he was coming out,” Douglas said. “He doesn’t make those decisions. But I think it was cool to see a young quarterback go into an SEC environment in 2019 and win a game at Tennessee, to go and play the USC Trojans early last year and win that game. It’s not like he hasn’t played high-level competition before.”

It is interesting that Douglas brought up McNair, who had an outstanding career out of a tiny school. Remember, Douglas also played a key role in the Ravens’ drafting of Joe Flacco out of Delaware. The quality of opponent did not scare Douglas away, and he raises a good point about the games Wilson won as a junior against Tennessee and USC. Everyone focuses on Wilson’s 2020, but he started three years at BYU. He made 28 college starts. Of the top five quarterbacks in this draft class, only Trevor Lawrence started more. There is a large body of work from college to judge Wilson on, unlike a Trey Lance or Mac Jones, who each only started 17 games.

30/04/2021 Sport Comments Off on Jets NFL Draft thoughts: Nick Foles should be next quarterback move
Lifestyle