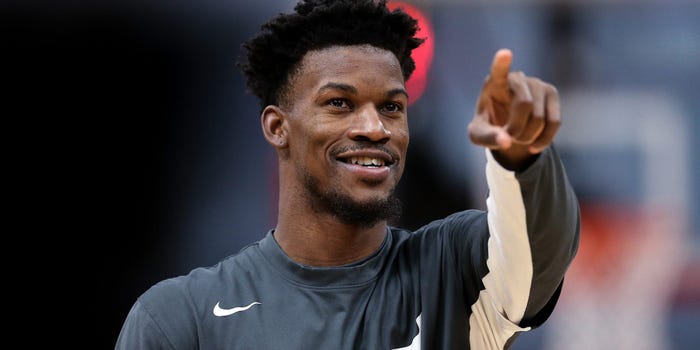 In the midst of leading the Miami Heat to the NBA Finals in the Disney bubble, Jimmy Butler also ran a coffee shop from his hotel room.

"Big Face Coffee," as it was named, had all sorts of coffee drinks, of all different sizes, but every drink cost $20. Butler had the coffee equipment shipped to him in the bubble, then capitalized on ripping off his teammates when he realized there were few good caffeine options on the NBA campus.

Months later, with the bubble now over, Butler's coffee obsession is still going strong, according to Sports Illustrated's Rohan Nadkarni.

Butler owns a Chemix for pour-overs and an espresso machine, according to Nadkarni. Butler also roasts and grinds his own beans, his favorites coming from Brazil. He has also been practicing latte art.

"You have to pour it from a certain height and certain angle," Butler told Nadkarni. "It's taken up a lot of time, and a lot of mistakes."

If not for the whole NBA thing, Butler would own a café.

"I wish I could take five years off and open a café," Butler said.

According to Nadkarni, Butler used to drink run-of-the-mill coffee before learning a better brew could have positive health benefits. In the months and years since, during travels to Europe, Butler has reportedly picked the brains of coffee drinkers about their preferences.

By all accounts, Big Face Coffee has been up and running in the offseason. Butler posted a funny video to Instagram during the offseason in which he told a kid that he was not getting paid to make Butler coffee.

Butler also told ESPN's Rachel Nichols that he recently received his first batch of Big Face Coffee beans. He said he planned to make Goran Dragic the model for the company, adding that he wouldn't get paid for it, either.

"It's in motion, and I think it's going to be a big thing," Butler said.

15/12/2020 Sport Comments Off on Jimmy Butler started an overpriced coffee shop in the NBA bubble and now roasts beans, practices latte art, and wants to run his own cafe
Lifestyle