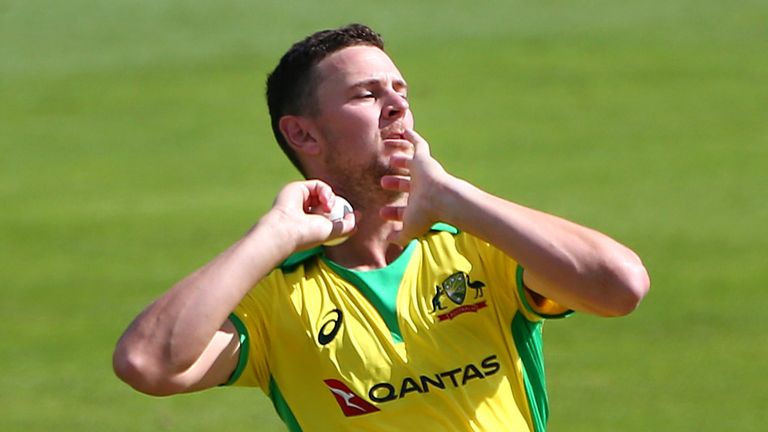 Josh Hazlewood believes England have impressive white-ball depth but the Australia fast bowler is undaunted ahead of the upcoming limited-overs matches between the teams.

England are without several first-team players in their T20 series against Pakistan but Tom Banton and Dawid Malan have answered captain Eoin Morgan’s calls for those on the fringes to put forward their cases.

Banton amassed 71 off only 42 balls in Friday’s abandoned opener while Malan’s assured 54 not from 36 deliveries – his seventh 50-plus score in 12 T20 innings – helped England wrap up a five-wicket victory on Sunday.

Hazlewood said: “We’ve seen a bit more depth from them this year with having to have different players in each squad. They had a good chase against Pakistan, they know their roles and their white-ball team is as good as ever.

“A few of the new guys who I haven’t seen a great deal of (have stood out recently): Tommy Banton, Dawid Malan – I’ve seen him but he’s in the runs again.

“Eoin Morgan runs a really good ship in the white-ball stuff, the confidence is always high and they always win a lot of games of cricket so they’re pretty confident. They’re always a tough team.”

After Pakistan conclude their tour obligations on Tuesday, England move on to face Australia in three T20s at the Ageas Bowl in a series which starts on Friday while three one-day internationals follow later in September.

The most recent ODI series between the teams saw Australia whitewashed 5-0 in 2018, while England memorably trounced Aaron Finch’s side in the semi-finals of the World Cup last year. England may have won 11 of their most recent 14 completed T20s to sit second in the sprint format rankings but Australia occupy top spot and Hazlewood is bullish about their chances in both series.

He said: “We’re coming off not much cricket but we always think we can win any game of cricket, to be honest, in Australia and around the world in any format.

“England are flying at the moment and there’s a couple of new faces we’ve got to look at. It’s always tough here but we expect to win every game we play.”

Hazlewood regained his spot in Australia’s 50-over side earlier this year, but he is below Mitchell Starc, Pat Cummins and Kane Richardson in the T20 pecking order.

But with Australia having won their last four series in a row, Hazlewood admitted he may have to bide his time, adding: “It’s a tough side to get into.

“The team keeps winning and the guys are going well, especially the bowling unit. If I was in the team and we were doing that, I’d expect to keep playing. I guess I’m just waiting for that position to open up.”