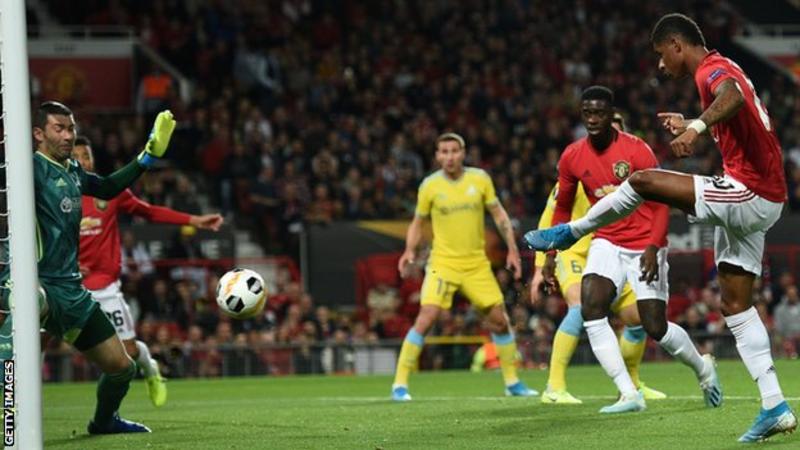 Rashford, who wasted two good chances in Thursday’s Europa League win over Astana, has gone five matches without a goal in open play – though he scored a penalty against Leicester last weekend.

“He is still learning what finishes to make in different circumstances,” said Solskjaer of the 21-year-old England international.

Rashford has scored three goals, including two penalties, for Manchester United this season. Two of those came in their opening Premier League match against Chelsea, while he also missed from the spot in the surprise home defeat by Crystal Palace.

The summer departures of Romelu Lukaku and Alexis Sanchez to Inter Milan mean Rashford, whose highest goals tally for a season so far is 13, is now regarded as the senior striker at Old Trafford.

Anthony Martial, another of United’s attacking options, has been out since 24 August with a thigh injury, while 17-year-old Mason Greenwood started – and scored the winner – against Astana.

During pre-season, Rashford said he did not regard himself as an orthodox centre-forward, which was the position he started Thursday’s game at Old Trafford.

Former United striker Solskjaer accepts modern forwards are more flexible than they were in his era, and the Norwegian is aware Rashford is still a long way off his peak.

“One chance against Astana he could have finished with his left instead of his right but we are working with him every single day in training because he wants to improve,” said Solskjaer.

“There are not many traditional number nines left now. Marcus can play right, left, up front on his own, or as a number 10.

United return to Premier League action at the weekend with a trip to West Ham on Sunday (14:00 BST).

As well as Martial, midfielder Paul Pogba and defender Luke Shaw have been ruled out, while Solskjaer is “hopeful” winger Daniel James will recover from an ankle problem.