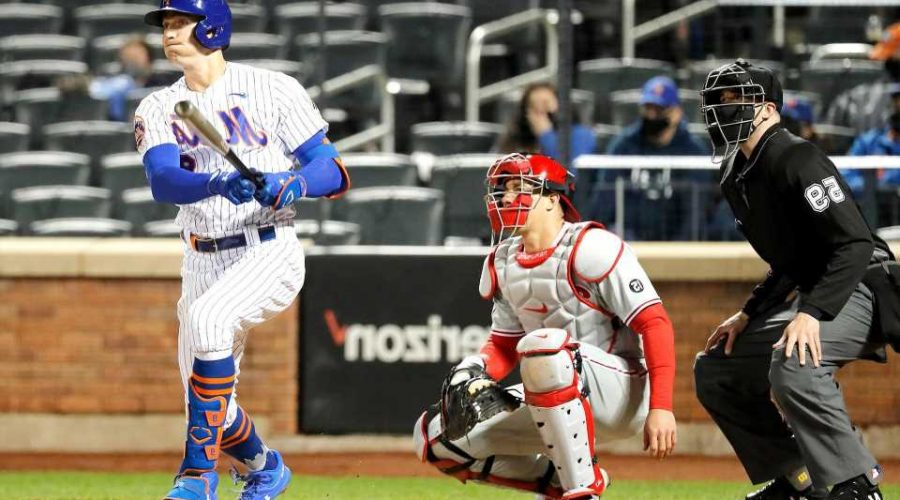 Pitcher ‘stepping up’ for Mets after rain debacle

A pulse could be detected from this Mets lineup over the final eight innings Tuesday, spanning two games, and that carried the day.

Jonathan Villar delivered a walk-off hit in Game 1 and Brandon Nimmo produced generously in the nightcap, allowing the Mets to celebrate a doubleheader sweep of the Phillies in front of 7,611 at Citi Field.

The Mets won 4-3 in eight innings in the first game before taking the nightcap, 4-0.

Nimmo reached base five times in the two games. In the nightcap, he finished 3-for-4 with three RBIs in raising his OPS to 1.146.

Marcus Stroman’s gem in Game 2 gave the Mets consecutive victories for the first time this season. Stroman, who threw only nine pitches Sunday before his start against the Marlins was suspended by rain, fired six shutout innings, in which he allowed four hits. That followed a strong start by Stroman last week in Philadelphia, in which he allowed one earned run over six innings.

In the nightcap, the Mets got busy against Aaron Nola in the fourth inning, when Game 1 hero Villar delivered an RBI double before Nimmo’s two-run single extended the lead to 3-0. Nimmo drove in another run in the sixth with a single after Tomas Nido’s first career triple.

Jeff McNeil started the rally in the fourth by reaching on an infield single. He barely beat the throw to first and the Phillies challenged the call, but it was upheld on replay.

Villar slashed an eighth-inning RBI single against Hector Neris in the first game to complete a wild Mets comeback.

Pete Alonso’s RBI single in the eighth tied it — Francisco Lindor was on second base as the runner to begin the frame, per the extra-inning rule (doubleheaders are seven innings per game) — before Villar ended it with a shot to left field.

The Mets had only three hits in the game entering the inning and had been 0-for-6 with runners in scoring position before Alonso delivered.

Didi Gregorius’ RBI infield single against the shift in the eighth gave the Phillies a 3-2 lead on Trevor May. The run was unearned after catcher James McCann was charged with a passed ball, which allowed Andrew McCutchen to reach third base.

There were boos in the sixth after lefty Jose Alvarado drilled Michael Conforto in the right wrist with a 100-mph fastball. That came after Alvarado threw high-and-tight on Conforto with a fastball of the same magnitude.

Jean Segura’s infield single with two outs in the sixth against Miguel Castro tied it 2-2. Though Rhys Hoskins walked leading off the inning and Bryce Harper singled, Castro was on the cusp of escaping unscathed after striking out Alec Bohm and getting Gregorius to hit into a fielder’s choice. But Segura hit a dribbler to third base and beat Guillorme’s throw, while Hoskins scored to tie the game.

After four strong innings, Taijuan Walker began to fade in the fifth and was removed with one out. Pinch-hitter Brad Miller drew the Phillies’ second straight walk in the inning, this one on four pitches, prompting manager Luis Rojas to summon Castro from the bullpen.

Castro struck out Andrew McCutchen on a changeup before the Phillies attempted a double steal and Roman Quinn was tagged out by Guillorme, who had jumped to catch McCann’s throw. Guillorme landed on Quinn and appeared to move him off the bag with the body blow, allowing for the tag.

Walker’s final line included eight strikeouts and three walks over 4 ¹/₃ innings with one earned run allowed on three hits. In his Mets debut Thursday, the right-hander allowed two earned runs over six innings in a no-decision against the Marlins.