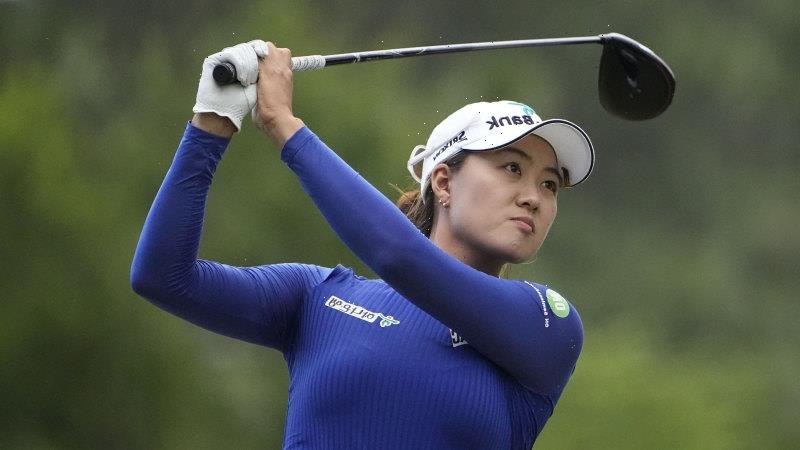 Australia’s Minjee Lee moved up the leaderboard with a five-under-par 66 on Friday (Saturday AEST) to tie Mina Harigae for the 36-hole lead at the US Women’s Open.

Lee, the fourth-ranked player in the world, made six birdies and one bogey at Pine Needles in Southern Pines, North Carolina, to catch up to Harigae, who held the lead after one round and posted a 69 on Friday. Both are at nine-under 133 after two rounds. 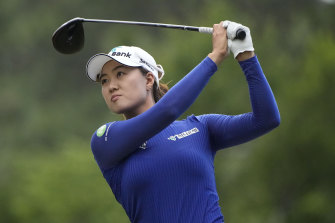 Australia’s Minjee Lee shares the lead halfway through the US Women’s Open.Credit:AP

South Korea’s Hye-Jin Choi shot a 64 for the low round of the day and joined Sweden’s Anna Nordqvist (68 on Friday) two back of the leaders.

World No. 1 Jin Young Ko of South Korea (67) and Swedish amateur Ingrid Lindblad (71) are tied for fifth at six under.

Lee rolled in four of her birdies on the front nine before cooling off. Last July she broke through for her first major title at the Evian Championship in France, and she got back to the winner’s circle last month at the Cognizant Founders Cup.

“The golf course can really catch up to you quickly, so just trying to take whatever I have in front of me,” Lee said. “Whenever I have a birdie opportunity, I try to take advantage of that.” 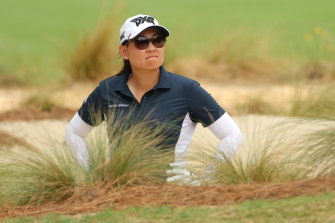 Co-leader Mina Harigae prepares to play a shot from the bunker in the second round of the US Women’s Open.Credit:Getty Images

Harigae made five birdies but also had three bogeys. Though winless on the LPGA Tour in 13 seasons, she is once again contending at a major after sharing the 36-hole lead at a major last year, the Women’s British Open, and finishing tied for 13th.

After shooting two under on the back nine to start her round, Choi birdied five of her last nine holes to make a push. She was the runner-up at this championship in 2017 as an amateur at age 17, but it is her first full season on the LPGA Tour after dominating the Korean equivalent recently.

“I think that this US Women’s Open fits me quite well, and I think the course is excellent,” Choi said. “I had high expectations when I came here.”

Lindblad shot an even-par round (three birdies, three bogeys) after the 22-year-old surprisingly held the lead for much of Thursday and went to bed in second place.

World No. 2 Nelly Korda, playing her first tournament since taking time off to deal with a blood clot in her arm, is tied for 14th at three under after a second-round 69.

Danielle Kang made the cut on the number at three-over par and revealed Friday that she is playing through a tumour on her spine. Kang said doctors hadn’t determined whether it was malignant or benign.

Michelle Wie West shot a 74 on Friday and missed the cut at five over. Wie West is taking an indeterminate break from competitive golf following this week, only planning to play next year’s US Women’s Open at Pebble Beach.

“I’m probably going to let the clubs collect some dust on them for a little bit now, but I’m excited,” Wie West said. “There’s a lot of projects that I’m working on that I haven’t had time to do before, so I’m just going to dive into those. I’m really excited.”

Ten-time major champion Annika Sorenstam of Sweden shot 81 and missed the cut at 10 over. She was competing in her first US Women’s Open since 2008.

Defending champion Yuka Saso of Japan also missed the cut at nine over.

World No. 3 Cameron Smith of Australia shot a three-under 69 amid tough scoring conditions to forge a narrow lead Friday at the Memorial Tournament in Dublin, Ohio.

Smith was one of six co-leaders after Thursday’s opening round. Now he stands alone at eight under, one shot ahead of Denny McCarthy and South Korea’s K.H. Lee. 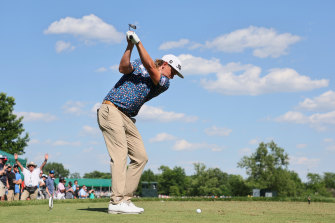 Cameron Smith tees off on the 16th, and leads the Memorial.Credit:Getty Images

“Really happy with where my short game’s at,” Smith said. “I feel like I’m rolling the ball really good. Just need to sort out that longer stuff. Didn’t really hit many fairways on the back greens, but just need to hit a few balls and sort it out.”

If Smith goes on to win the tournament, he’d join Tiger Woods (2001) as the only men to win the Players Championship and the Memorial in the same season. Smith said “there’s no reason why I shouldn’t be” near the top of the leaderboard each week now.