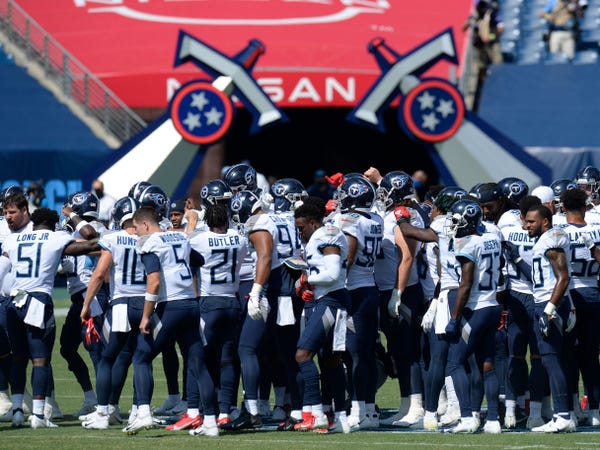 The Tennessee Titans had two more players test positive for COVID-19 on Friday, bringing the total outbreak within the team to seven players and five staffers.

This week, the team has gone on lockdown, isolating players and closing the doors of its practice facilities to contain the outbreak from spreading further within the team.

For the NFL, the Titans outbreak presents the first real scheduling challenge brought on by COVID-19 of the 2020 season. Earlier in the week, it looked as though a fairly simple schedule change could help buy the team time to recover, as laid out by ESPN's Adam Schefter.

While the solution would leave the Titans and Steelers to take their bye week early, and thus leave them to finish out the season with 13 straight weeks of football, it was undoubtedly an easier solution for the league than an alternative that added weeks to the end of the schedule or any other drastic measures that could have been taken.

"We do not care," said Pittsburgh Steelers head coach Mike Tomlin when asked about the prospect of playing 13 weeks in a row to accommodate the switch.

However, the potential of this proposed solution to work hinges on the Titans being able to get back to a regular schedule and play their Week 5 game against the Buffalo Bills, a reality that suddenly brings its own challenges as players continue to test positive for COVID-19.

The problem the Titans face is twofold. First, if players keep testing positive, their facilities will continue to remain closed, making preparing for a game against the Bills in Week 5 a daunting task.

Also, with seven players already testing positive for COVID-19, head coach Mike Vrabel and the rest of his staff will have to figure out how to fill several holes in the roster to put a competitive football team on the field, as those that tested positive may not be ready to go in just a few weeks.

Teams love to promote the mantra of "next man up," but "next seven guys up" is an entirely different equation.

For the NFL, the Titans potentially being unable to take the field Week 5 raises some huge questions, as making up an NFL game is not as simple as scheduling a baseball double-header. The league could add a week to the end of the regular season that serves as a de facto bye week for playoff teams and a make-up week for teams affected by COVID-19, but such a drastic change is a step that the NFL would not take lightly.

As things stand, the scheduled game between the Titans and Bills next Sunday is still on. If the Titans are able to contain the outbreak, get back to their facilities, and make use of the expanded practice squads teams were allowed this season to fill out their gameday roster, they could still be fine to play.

But the Titans have now reported more positive cases throughout the week, and if that trend continues, it could have ramifications for both their schedule and the rest of the league as the season moves forward without them.