Hadley, who started her Super Netball season with a bang as the MVP in last weekend’s resounding victory over the Giants, credited her impact to a mindset that doesn’t dwell on past mistakes or worry about the future.

After a few “disappointing” campaigns, she is letting go of her fears and doubts to “live in the moment”. 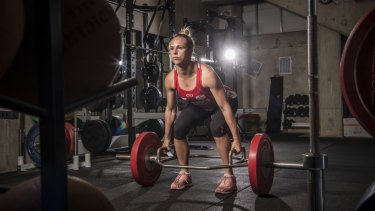 The 26-year-old conceded that philosophy was why she didn’t use a court-side interview after the Sydney derby triumph to push her World Cup claims.

“My new mindset is to stay in the moment,” Hadley said ahead of Sunday’s match against the Adelaide Thunderbirds, who last weekend broke a 27-game losing streak.

“I’ve found it’s great to stay focussed on the process, rather than thinking about the outcome or what might happen – especially in the tense moments of a match.

“The last two seasons for me have been going through the motions, and disappointing. You train hard, but the team hasn’t made the finals. Last year was the first time in a long time I wasn’t named in the Australian squad [although Hadley fought her way back in]. I realised I needed to do something different.” 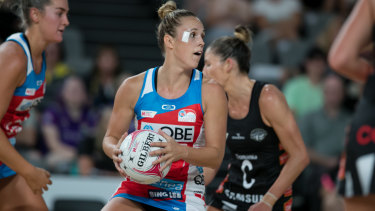 Tough: Hadley soldiers on with stitches in her head during a pre-season match.Credit:Narelle Spangher

After spending time with the club’s sports psychologist, Hadley committed to focus on personal growth. The Swifts vice-captain accepted that meant she could no longer treat comments about her performances as a personal attack.

“I needed to shift from a fixed mindset,” she said. “I knew I had the work ethic and physical attributes to be a good netballer. I needed to change to a growth mindset. It’s been awesome. I’ve had massive changes because of it.

“I was a perfectionist, but I’m now open to new challenges … not taking some things so personally.

"This sport means so much to me. You devote so much of your time and energy in being the best netballer possible. I now realise if someone gives me feedback, it’s not necessarily criticism, it’s advice to make me [and] the team better.”

Hadley's determination to be the best in a sport that’s becoming even more physical provides her with extra motivation to do such things as deadlift up to three times her body weight (a staggering 180 kilograms) or squat 140 kilograms.

“I’ve always been a strong, well-rounded athlete who thrives on training,” said Hadley after a typically tough session under Lukas Cannan, the Swifts’ strength and conditioning coach.

“Netball is becoming more physical and training like this gives me the confidence that’s needed to know I can take those hits. I also work hard on my speed on the court to have the tools that are needed during a game.”

If anyone needed a reminder of Hadley’s grit, they got it during a pre-season match against the Giants. She received a nasty gash above the eye that needed four stitches after accidently ramming into teammate Helen Housby’s elbow. Rather than sit out the remainder of the series, she played on.

“That’s the way the sport is going,” Hadley said. “Obviously there’s got to be some control about it, but you’d have seen over the years more body contact. I love it; love the way the game is developing in terms of speed, the need to adapt and being able to take the hits.”

Swifts coach Briony Akle said few people outside of netball appreciated the years of tough work the likes of Hadley have done to reach the top.

“People are mistaken if they think netballers turn up and just do a bit of work on the court,” Akle said. “You can see the type of athlete that’s playing and the athleticism that’s needed.

“Every ball Paige and our skipper Maddy [Proud] took [last week] they had a body on them. If they can’t take those knocks, they’ll spend a lot of time on the floor. In terms of Paige, she’s world class because she’s never taken short cuts and does everything for the team.”