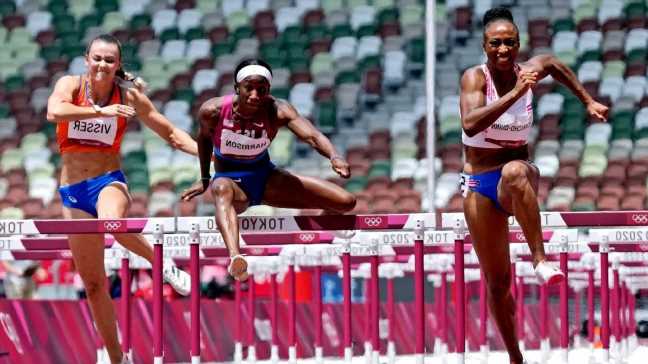 Just like that, our pool days are behind us. Team USA dominated in the water throughout these Olympic Games, but, as they say, all good things must come to an end.

So it’s time to bid farewell to Katie Ledecky, Caeleb Dressel & Co. and instead turn our attention to the track … and the court … and the pitch … and the floor.

From U.S. track stars Gabriele Cunningham and Kendra Harrison’s quest for Olympic hardware to a soccer semifinal that’s primed to be of epic proportions, we’re making sure you don’t miss a moment of the Games.

Here’s the latest and greatest:

World champion and world-record holder, USA’s Kendra Harrison, is now an Olympic silver medalist in the women’s 100-meter hurdles with a 12:52 race, taking second place by three hundredths of a second.

After failing to qualify for the 2016 Olympics, Harrison has been working for five years to get to this point.

This is Puerto Rico’s second gold medal at the Olympics after Monica Puig’s gold in singles tennis in Rio 2016. — Aishwarya Kumar

April Ross and Alix Klineman advanced to the quarterfinals of women’s beach volleyball with a 21-17, 21-15 Round of 16 win over Lidy Echevarria Benitez and Leila Martinez Ortega of Cuba. They will face Germany in the next round.

Miltiadis Tentoglou of Greece took gold in the long jump followed by a pair of Cubans — Juan Miguel Echevarria and Maykel Masso — for silver and bronze.

During the photo op at her medals ceremony Sunday night, shot putter silver medalist Raven Saunders of Team USA stepped off the podium, lifted her arms above her head and formed an “X” with her wrists. Asked what that meant, she explained: “It’s the intersection of where all people who are oppressed meet.”

She’s just Ilona from the block

Ilona Maher of Team USA Rugby Sevens is really into Jennifer Lopez. Like really. And J.Lo returned the love on Twitter.

02/08/2021 Sport Comments Off on Olympics 2021 live updates: Team USAs Harrison takes silver by a sliver in 100m hurdles and more from Tokyo
Lifestyle