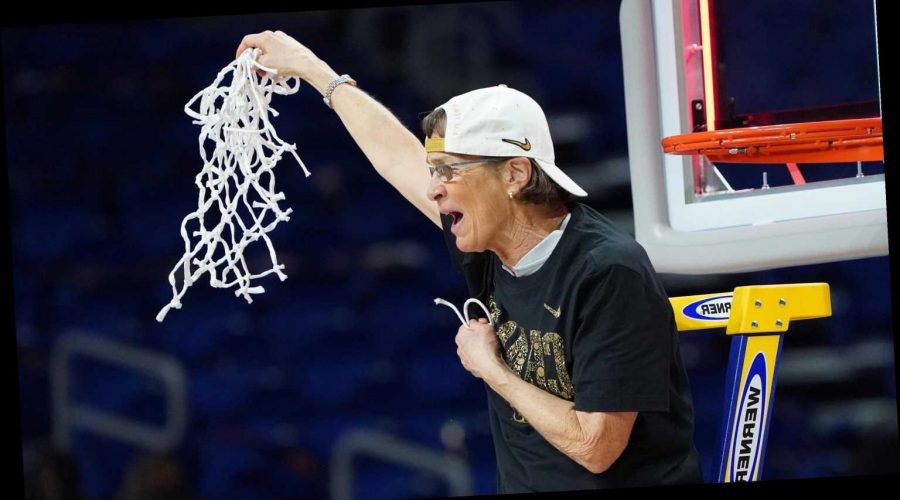 SAN ANTONIO — This title was the culmination of a long, hard road. Several of them, actually.

For Tara VanDerveer, it had been 29 years since she was able to beam with pride while watching her Stanford team cut down the nets. For her current players, it was a 90-day road trip that seemed even longer, living out of suitcases and hotel rooms like nomads so the COVID-19 pandemic wouldn’t steal yet something else.

And for everyone in the women’s game, it was three weeks of countering the NCAA’s disrespect, first with words and then with deeds, and having to explain to people who don’t get it or don’t care to why equity and optics matter.

So if Stanford smiled a little brighter, reveled a little louder, stayed on the floor a little longer, the Cardinal were entitled to all of it.

“This is the time we live in. Sometimes you just have to stick with things,” VanDerveer said Sunday, after top-seeded Stanford had held off Pac-12 rival Arizona 54-53 for its third national title, and first since 1992.

There’s a lesson there bigger, even, than the trophy the Cardinal will be bringing back to Stanford.

VanDerveer talked about the heartache she felt for those other teams that had come close, and the injuries that often derailed them. That wears on you, no matter how long you’ve been in a game or how much you love being a teacher. Her players are like family, and when they fall short of their dream, it cuts her just as deeply.

To have it happen again and again, to watch as the gap closed between the great programs and the good ones, it would have been easy – understandable, really – if she’d decided at some point that her list of accomplishments was long enough.

Just as it would have been easy for this year’s team to crumble under the restrictions dictated to them by COVID.

Stanford was not allowed to play home games because of local COVID restrictions. But the players still wanted to play, so the Cardinal spent the entire season on the road. They went to Las Vegas and Los Angeles and Santa Cruz. They practiced at the Golden State Warriors facility and in a gym with wooden backboards.

ANALYSIS: Stanford women's depth, grit are too much for Arizona as Cardinal win first title since 1992 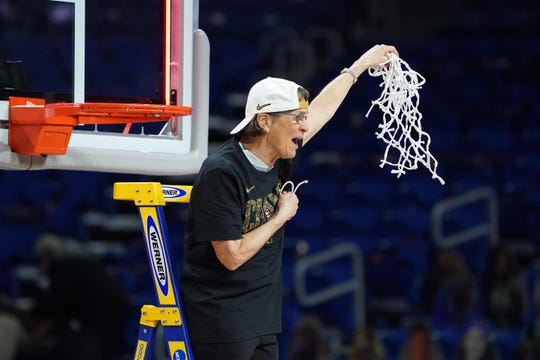 Tara VanDerveer and the Cardinal traveled thousands of miles during the pandemic to keep their season – and march to the championship – afloat. (Photo: Kirby Lee, USA TODAY Sports)

Even as they watched others flout protocols, not wearing masks or social distancing, they kept to their strict regimen. A 14-day quarantine imposed after they’d snuck out to play pickup games the week they returned to school had left a deep impression on them, and they didn’t want all of this to be for naught.

“It's just a lot,” said Haley Jones, who was named the Most Outstanding Player after her three-point play with 2:24 left proved to be the game-winner. “You're on the bus, you're on planes all the time. There's just never really an end in sight. So it was difficult.

“But I think from that experience … we just had something extra to us this year,” she added. “I don't think we showed our best in all the games — any of the games. I don't think we really were like, `This is the best game we've ever played.’ I think we've had good halves, good moments, great moments.

MORE:  Stanford, Arizona both missed chances on their head-scratching possessions 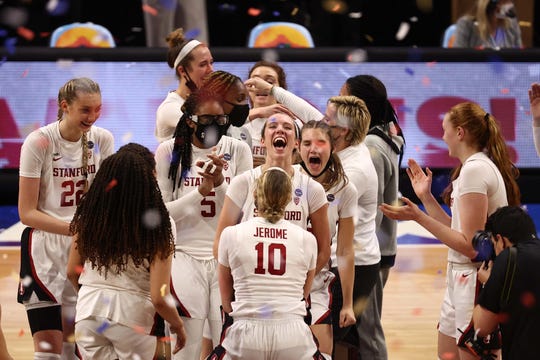 That is something women, women athletes in particular, are adept at, because they have no choice. From the time we are young, we are told and shown that the world thinks less of us, that our wants and wishes are not the priority.

Yet we find ways to adapt, climbing higher and striving for more because we know our worth is greater than what the world has decreed. The uproar caused at the start of March Madness by the non-existent weight room was nothing new, but that does not make it any less acceptable.

Players and coaches spoke out, expressed their disappointment and outrage and begged for change. Then they spent the next three weeks showing the NCAA — not to mention corporate sponsors and others in decision-making roles — why it is foolhardy not to invest in women.

Until Jalen Suggs’ half-court heave to beat the buzzer in Saturday night’s UCLA-Gonzaga semifinal, the women’s tournament was far more captivating than the men’s event. The games were better and more entertaining. If you can’t see the value in that, you never will.

“It was tougher being down here,” VanDerveer said. “But we stayed in it, we found ways to really enjoy each other and be excited to play."

It isn’t easy to stay the course, especially when it seems as if there is no end to the road. But when you do, and when you reach the end, it is worth it. Every bit of it.