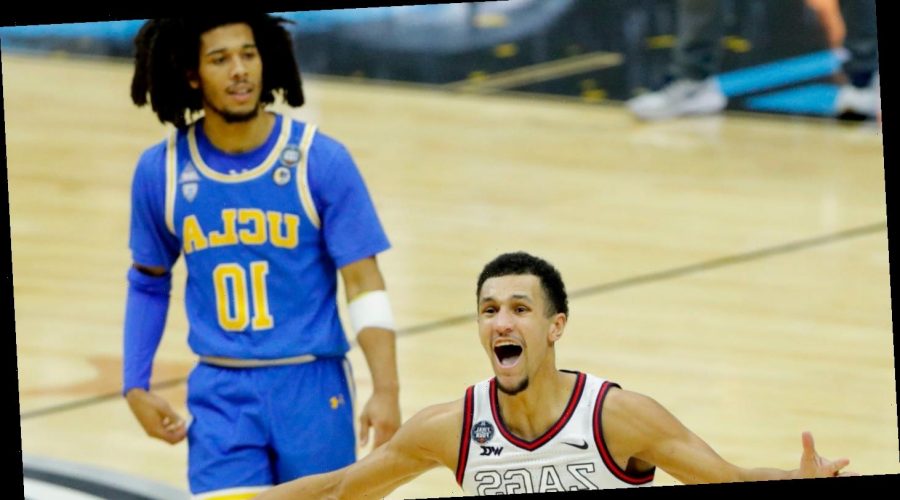 INDIANAPOLIS — The lore of Villanova’s upset over Georgetown in the 1985 national championship game has reverberated for 36 years worth of underdogs in the NCAA Tournament, not just because of the result that night but because of how it happened.

To beat an unbeatable opponent, Villanova had to play what has been called the perfect game, a notion that seems impossible to understand until you see it with your own eyes.

For 44 minutes and 57 seconds, UCLA played the perfect game against unbeaten and barely tested Gonzaga on Saturday night in the national semifinals.

UCLA, a No. 11 seed that barely got in the tournament and barely stayed in it at various points, had gone blow-for-blow through 40 minutes of regulation and beyond with a Gonzaga team that had spent the past four months making basketball look like an easy sport.

And until the buzzer sounded at the end of overtime, UCLA’s perfect game looked like it might just end Gonzaga’s perfect season.

Instead, Jalen Suggs —  the superstar freshman for Gonzaga — added to the lore of this tournament with a buzzer-beating three that banked in from just past halfcourt to beat UCLA 93-90 and advance the Zags into Monday’s championship game against Baylor.

The shot itself will live in history as one of the great moments in tournament history.

It also shows what it took to beat this UCLA team.

And for that, we owe the Bruins a huge debt of gratitude.

As we saw from the beginning of the tournament when it escaped Michigan State in overtime, then launched its run to the Final Four, it simply was not in the DNA of this UCLA team to go away. Not when Gonzaga was gliding to the rim with ease early, not when the Bruins saw the fouls pile up and their lead go away at the end of the first half, and not when they committed a flagrant foul with 12 minutes remaining that left the game teetering on the edge of getting away from them.

UCLA just kept the pressure on, all the way until the Bruins had the ball in Johnny Juzang’s hands in a tied game at the end of the regulation, ready to attack the rim for the final shot.

Juzang, who seemingly hadn’t missed a shot in three weeks, got where he wanted to go. The only problem was that Gonzaga’s Drew Timme was there first, feet set, perfectly positioned to take a charge. Despite the complaints from the UCLA bench, it was a correct call.

Then in overtime, even when the Bruins fell behind 90-85 in the final minute, they made one last push with Jaime Jaquez Jr. hitting a 3-pointer, getting a stop and then tying it again on a second-effort play by Juzang for his 29th point.

As it turned out, the three seconds left on the clock by the Bruins were enough to break their hearts.

UCLA may regret those moments, but it would be hard to imagine how it could have played a better game. The Bruins shot 58 percent from the field, made 8-of-17 threes and survived the onslaught of easy baskets the Zags were able to generate because that’s how good they are.

For nearly 45 minutes, UCLA had what it took to match them. And with one more play, the Bruins might have taken their place alongside 1985 Villanova as the creators of a perfect game.

Instead, they got beat by a perfect shot.

04/04/2021 Sport Comments Off on Opinion: UCLA men played perfect game against Gonzaga but got beat by perfect shot
Lifestyle