Naomi Osaka's intense week at the Western & Southern Open in New York ended when the 22-year-old withdrew from the championship match due to a hamstring injury, leaving her participation in next week's US Open in doubt.

The two-time major winner was set to play former world No. 1 Victoria Azarenka, who won her first title since 2016 via walkover.

"I'm sorry to have to withdraw today with an injury," Osaka said in a statement. "I pulled my left hamstring yesterday in the second set tiebreak and it has not recovered overnight as I had hoped. This has been an emotional week and I want to thank everyone for the outpouring of support." 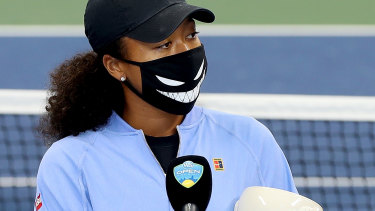 Osaka, the world No. 10, who is Japanese but grew up in the United States, prompted a pause in play from the Western & Southern Open on Thursday after announcing she would not play her semi-final match in solidarity with other players across sports protesting social injustice and police brutality.

When she returned to play Friday, Osaka defeated Elise Mertens 6-2, 7-6 (7-5) but grabbed her hamstring chasing down a ball late in the second set.

The 2018 US Open champion and a heavy favourite to take the title again this year, Osaka is scheduled to play her opening round match against her fellow Japanese player Misaki Doi on Monday night in prime time. She was unsure if two days off the court would be enough time to recover.

"I never know with that, but I just hope I'm giving myself the opportunity and the chance to have enough time," Osaka said in a news conference Saturday. " . . . The only thing that makes me a bit sad – or not sad, it's just a bit unfortunate – is that the physio rooms on site, they don't have ice baths, which I normally take after the matches. So I feel like it's something that I have to adjust to. Everyone has to deal with the same circumstances so I can't really say much about it, but it definitely is a little bit of a hindrance. But also I understand because it's not hygienic in regards to Covid[19]. It's just something I have to adjust to."

Saturday's walkover afforded the 59th-ranked Azarenka the 21st singles title of her career, her 20th on hard court. A two-time Australian Open champion who considered retiring earlier this year, Azarenka, 31, told ESPN she now feels better than ever in her return to the court.

"You have one day to do the miracle, and I hope you do it," Azarenka said.