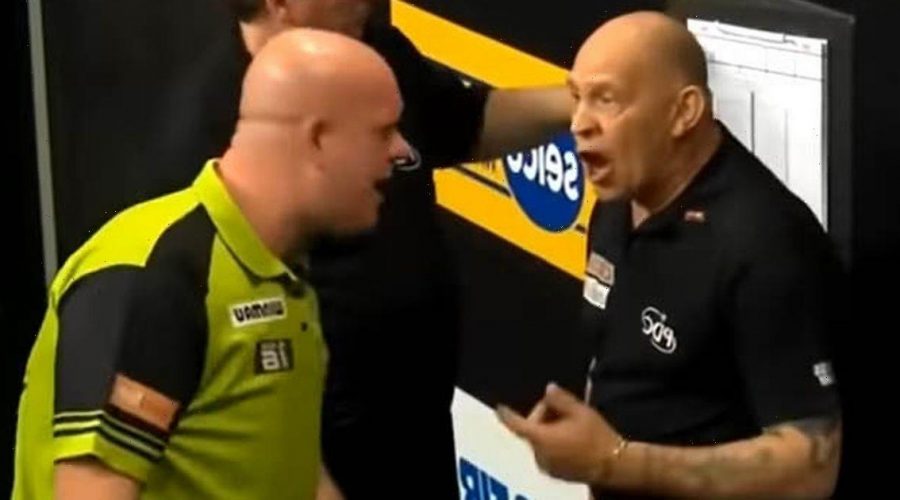 Offbeat news from the world of sport

Russ Bray's distinctive gravelly voice has provided the backdrop to some of the most iconic moments in darting history for more than 25 years.

The legendary referee will not be calling Tuesday night's World Championship final between Michael van Gerwen and Michael Smith – that honour has gone to Kirk Bevins – but it has still been a memorable tournament for Bray, who oversaw Gerwyn Price's headphone-wearing antics against Gabriel Clemens.

While darts officials get far more respect than, for example, football referees, there are moments when they need to step in and calm emotional players down. One such moment occurred earlier this year between Bray and one of the finalists.

READ MORE: Darts player told not to swear by referee as fans plead for 'horrific' match to end

Van Gerwen confronted Bray following a Premier League match against Jonny Clayton in Aberdeen. MVG was unhappy with the timing of Bray’s attempts to quieten a rowdy crowd and one fan in particular who kept whistling as Clayton was about to throw.

Speaking about the incident, Van Gerwen accused Bray of putting his “stamp on the match too much”.

Van Gerwen, who lost the match in question, added: “That ‘thank you’ from him to the public happens every time I have to throw. But I can't blame that. I just have to learn from this.”

Bray, a former London traffic cop, gave as good as he got, refusing to back down as the Green Machine spouted off on stage. Bray addressed the altercation when he appeared as a guest on the Happy Hour podcast and said the issue was resolved as soon as they had left the stage.

He explained: “Michael took umbrage with me for saying ‘thank you’ and disrupting his rhythm and I just said ‘don’t use me as your excuse’, that’s all I said.

However, the fallout was resolved with a hug just a few minutes later. “We walk off the stage, I walk down the steps and he’s waiting for me and puts his arm round, [saying], ‘oh mate’,” said Bray.

“At that given time, when they’re up on stage, there’s the frustration, they might be a little bit embarrassed. At the end of the day, it’s the spur of the moment, it’s how they are at that given moment. Literally, two minutes later we’ve got our arms around each other.”

Bray then praised Van Gerwen, adding: “Michael really is ‘Mr Generosity’. If you go out with Michael he’s like ‘I’ll get this, I’ll get this’.

“After that incident, we had in Aberdeen, we were in Budapest. We were chatting away on the same flight and had breakfast together. When I say there’s never anything after [an on-stage bust-up], there really isn’t.”

Who is your favourite darts referee? Tell us in the comments section below Bray played darts at county level for Hertfordshire before getting into officiating in the mid-1990s. Away from the oche, he is a keen golfer and a huge West Ham United supporter.

£I’m from the Bobby Moore era but I like Billy Bonds, Frankie Lampard Senior, Harry Redknapp, Hurst and Peters obviously, but my real true favourite was Bobby,” he told the Hammers’ website in 2020.

“He epitomised what the game was, he was a gentleman, he was a brilliant football, his timing was impeccable and his delivery was absolutely second to none.”