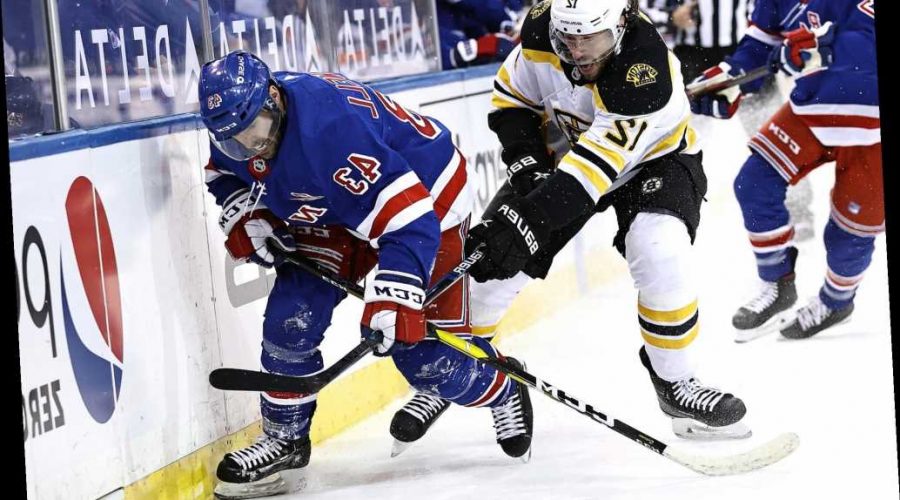 Alexis Lafreniere gets big Rangers chance with Artemi Panarin out

There’s a dramatic difference in this longtime Rangers weakness

The Rangers’ self-praise is starting to ring hollow.

The Rangers came out on the wrong end of a black-and-blue matchup with the surging Bruins, who extended their point streak to 10 games with a 1-0 victory at the Garden on Friday night — just two days after Boston sent the Blueshirts to an overtime loss.

Without the scoring prowess of their top producer, Artemi Panarin, who was ruled out with a lower-body injury he sustained Wednesday, the Rangers lost a third straight game and fell even further into the basement of the East standings.

It was the third time the Rangers have been shut out this season, and the second time in their past three games.

The Rangers have continued to highlight how close the games have been, how many positives there are to take away, and that they are just a couple of passes away from piecing it all together.

But the fact is this: The shortened 2020-21 season is nearly a quarter of the way over.

Bruins netminder Tuukka Rask gave the Blueshirts fits Wednesday night, and former Islander Jaroslav Halak did the same Friday. Boston has lost in regulation just once this season, on Jan. 18 against the Islanders, and is arguably one of the most well-rounded teams in the entire league.

The Rangers, however, proved they could skate alongside this physical Bruins squad when they forced overtime in their Wednesday meeting. The offensive grit, smart decisions and level-headed play just weren’t there this time around.

Jacob Trouba took a careless holding penalty less than two minutes into the third. A two-on-one rush with Kaapo Kakko and Alexis Lafreniere was easily broken up before either could get a shot off. And when the Rangers were gifted a power play in the final minute of the game for a six-on-four man-advantage, they lost the faceoff and couldn’t get a single shot on net.

Following a scoreless first period, old-time hockey made its way into 2021. Both teams combined for 13 penalties in the middle frame, with 36 total minutes served for either fighting or roughing.

The Rangers may have landed their punches, but they allowed the Bruins to take jabs where it mattered: On the score sheet. Nick Ritchie broke the scoring drought at 9:13 after stuffing the puck past Shesterkin, while Boston outshot the Rangers 13-10 in the second.

Through the first 20 minutes, the Rangers limited the Bruins in all areas of the ice, while the new-look second line of Lafreniere, Kakko and Ryan Strome not only dialed up the pressure in the offensive zone but dismantled Boston on the other end of the ice.