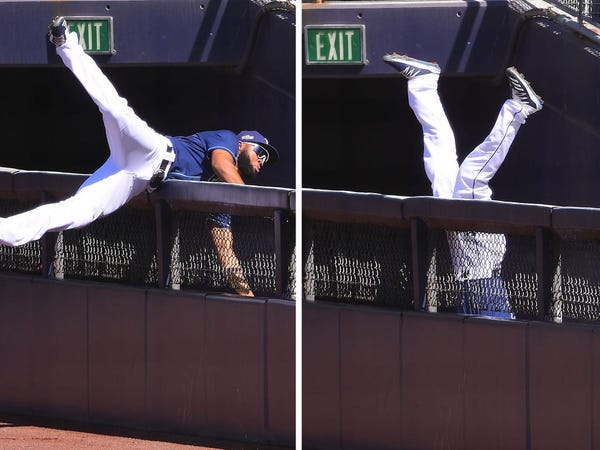 Manuel "Manny" Margot got off to a hot start Monday to become the Tampa Bay Rays' latest breakout star.

But even though his stunning, acrobatic second-inning snag has made headlines and been called one of the best of the season, the 26-year-old insists that he "definitely" enjoyed his first-inning home run even more.

"The home run didn't hurt, and it definitely helped us gain the lead," Margot said after the game, per ESPN.

The right fielder hit a three-run bomb in the first inning to give the Rays an early lead over the Houston Astros in Game 2 of their ALCS matchup. The homer — which sailed over the center-field wall at Petco Park in San Diego, California — was Margot's third of the postseason.

The former San Diego Padre only hit one home run through his entire regular-season campaign this year.

The following inning, Margot made the catch that's attracted awe from baseball fans and seemingly endless engagement on social media. After Houston's George Springer popped a fly ball into right field, Margot shielded his eyes with his glove and charged into foul territory.

He reached his left hand over the wall and, as the ball dropped into his glove, flipped over the guardrail with enough force that he fell head-first into the concrete ground on the other side. He still hung on for the inning-ending out, popping up with his glove raised in the air triumphantly.

Margot and the Rays are just two wins away from making their first World Series appearance since 2008, when they lost four games to one against the Philadelphia Phillies. Tampa Bay will look to take one step closer Tuesday at 8:40 p.m. as the Rays face the Astros for Game 3 of the series.