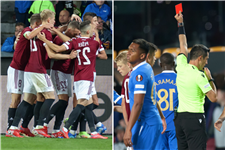 GLEN KAMARA was booed by CHILDREN before being sent off as Rangers slumped to defeat in Prague.

David Hancko’s goal was enough to win it for Sparta on a night when Czech football was again shamed by race disgrace. 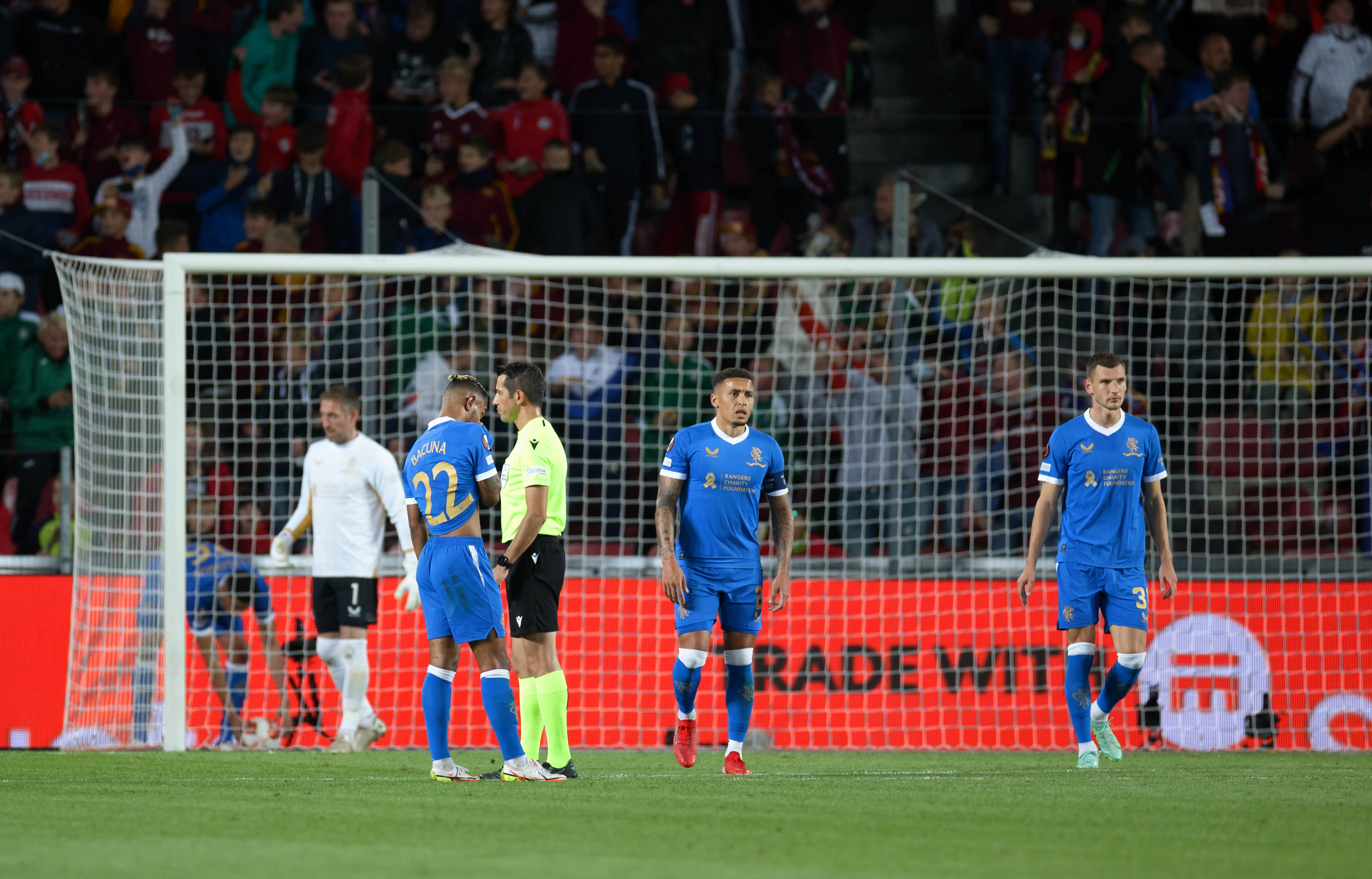 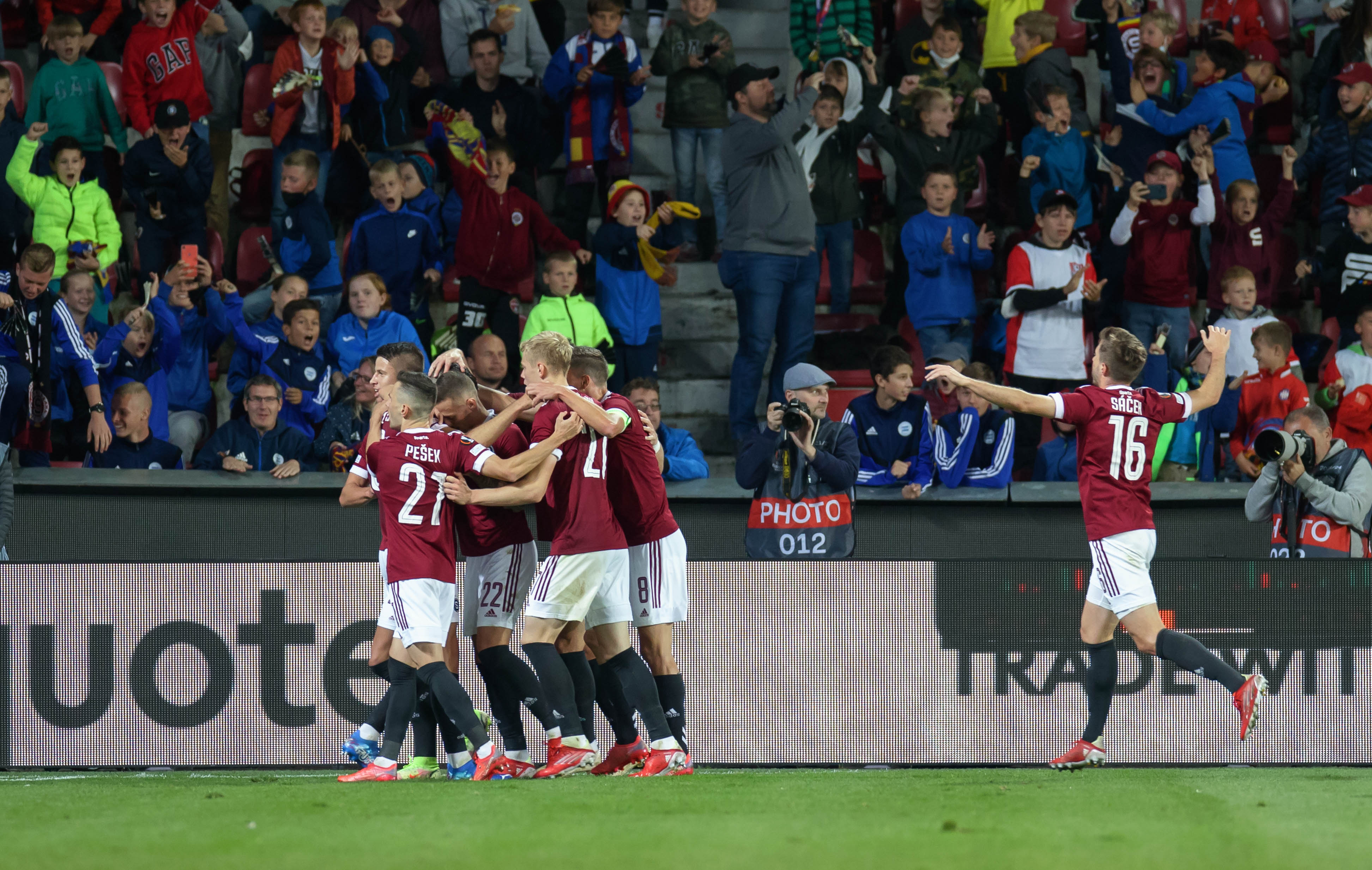 The Letna Stadium was closed to Sparta’s fans because of racist chants aimed at Monaco’s Aurelien Tchouameni in August.

But they got round that ban by opening the doors to over 10,000 local schoolkids – and Kamara was in their sights from the start.

The fact HE had been the one racially abused by Sparta’s city rivals’ Ondrej Kudela of Slavia in the Europa League last season seemed to be irrelevant as he was targeted once again.

A pre-match announcement in English that there was no place for discrimination in football sent out the right box-ticking signal.

But they were hollow words – because what followed was more Czech ugliness.

Over the squeals of the schoolkids, there was booing as Rangers players took the knee prior to kick-off in the Letna Stadium.

And when Kamara touched the ball for the first time after 45 seconds, the boos intensified – and that would be the case every time the Finn was in possession all night.

When he was booked shortly before the break, the Czech fans showed they were juvenile in every sense of the word by cheering the card loudly.

And their poisonous abusing of Kamara reached a crescendo when he was sent off for a foul on Michal Sacek.

It was shameful stuff and made a mockery of Sparta’s pre-game posturing that the match would go off without any racist overtones.

But while Rangers would have every right to complain to Uefa about the disgusting scenes, they could have no complaints about the result.

They barely laid a glove on Sparta and were well beaten by Hancko’s goal.

Although Fashion Sakala had a goal chalked off for offside, Sparta also missed a sitter when Jakub Pesek hit the bar and Allan McGregor made key saves in both halves.

Steven Gerrard, already without the injured Connor Goldson, sprung a surprise with his line-up.

Also out from the side who lost to Lyon in the Group A opener were Ryan Kent, John Lundstram and top European scorer Alfredo Morelos.

Juninho Bacuna made his first start for Rangers and Calvin Bassey, Kemar Roofe and Fashion Sakala all came in.

The early action on the field swung from end to end – but the home side gradually gained the upper hand.

Home keeper Florin Nita had to clear after Ondrej Celustka hesitated under pressure from Fashion Sakala, but the first real save of the match came at the other end after nine minutes.

Martin Minchev’s run was met by Jakub Pesek’s shot – but McGregor’s threw out his left hand to turn the drive over the bar.

Sakala had a shot saved and Joe Aribo’s header from Borna Barisic’s cross was acrobatically headed away by Filip Panak as Rangers pressed, but Sparta were a threat.

The visitors were relieved that Pesek had a fresh-air swipe at Lukas Haraslin’s cross, then McGregor was forced into a save with his foot after Minchev got away from Bassey.

The pressure was building and it was no surprise when Sparta went in front shortly before the half-hour.

They forced a corner off Tavernier on the left and from Pesek’s kick, Hancko got in front of Bassey to send a header in off the far post.

McGregor scrambled to keep it out but the Turkish referee signalled his watch had bleeped to confirm the ball had crossed the line.

The full-back had also scored the opener when Sparta thumped Celtic 4-1 in the competition last season.

Rangers were forced into a change shortly afterwards, with Bacuna trudging off holding his thigh. Ianis Hagi replaced him.

Rangers came close to falling further behind in the early moments of the second-half.

He passed across goal to Pesek and it seemed he must score – but his drive rebounded from the bar.

It was a big let-off for Rangers and they almost took immediate advantage of the escape.

Balogun’s header was saved by home keeper Nita and Sakala poked in the rebound – but the Zambian was flagged offside.

Rangers again had McGregor to thank for staying in the game when Adam Hlozek took advantage of slack defending to put Haraslin through on goal.

He turned inside Tavernier on to his left foot – but McGregor blocked his drive with his foot.

Steven Gerrard clearly knew his side needed a spark if they were going to rescue the game and he brought Morelos on after 65 minutes, with the ineffective Kemar Roofe going off.

But a long-range Hagi drive – easily saved by his fellow countryman Nita – was all they could muster to threaten Sparta’s goal.

And their diminishing prospects of salvaging anything from the game were dealt a further blow when Kamara caught Sacek late and was sent off by the Turkish referee.

In fact it was Sparta who came closest to scoring, Sacek firing wide from Hancko’s drive in stoppage time.

But the single goal was enough to leave Rangers firmly rooted to the bottom of the group. 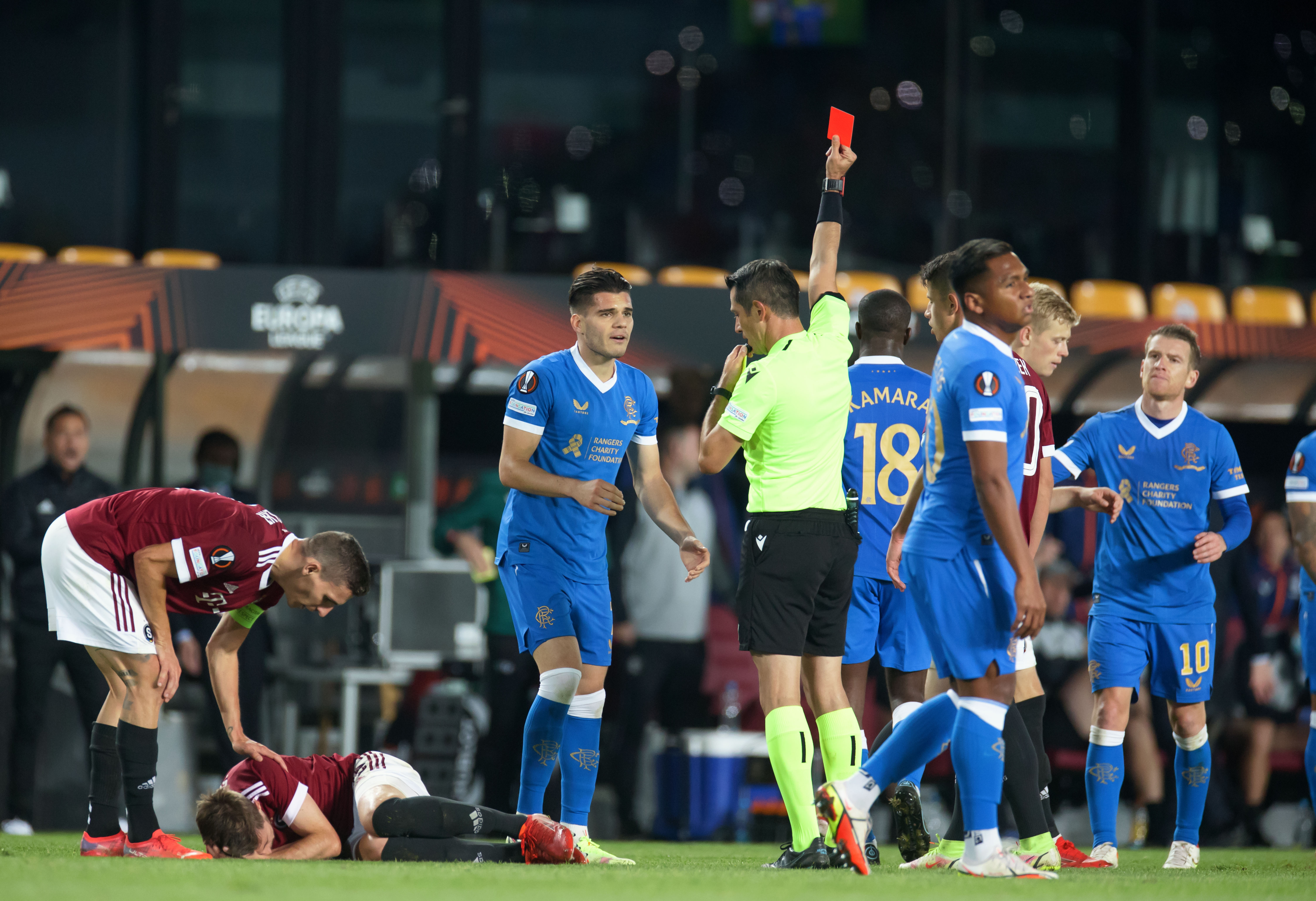 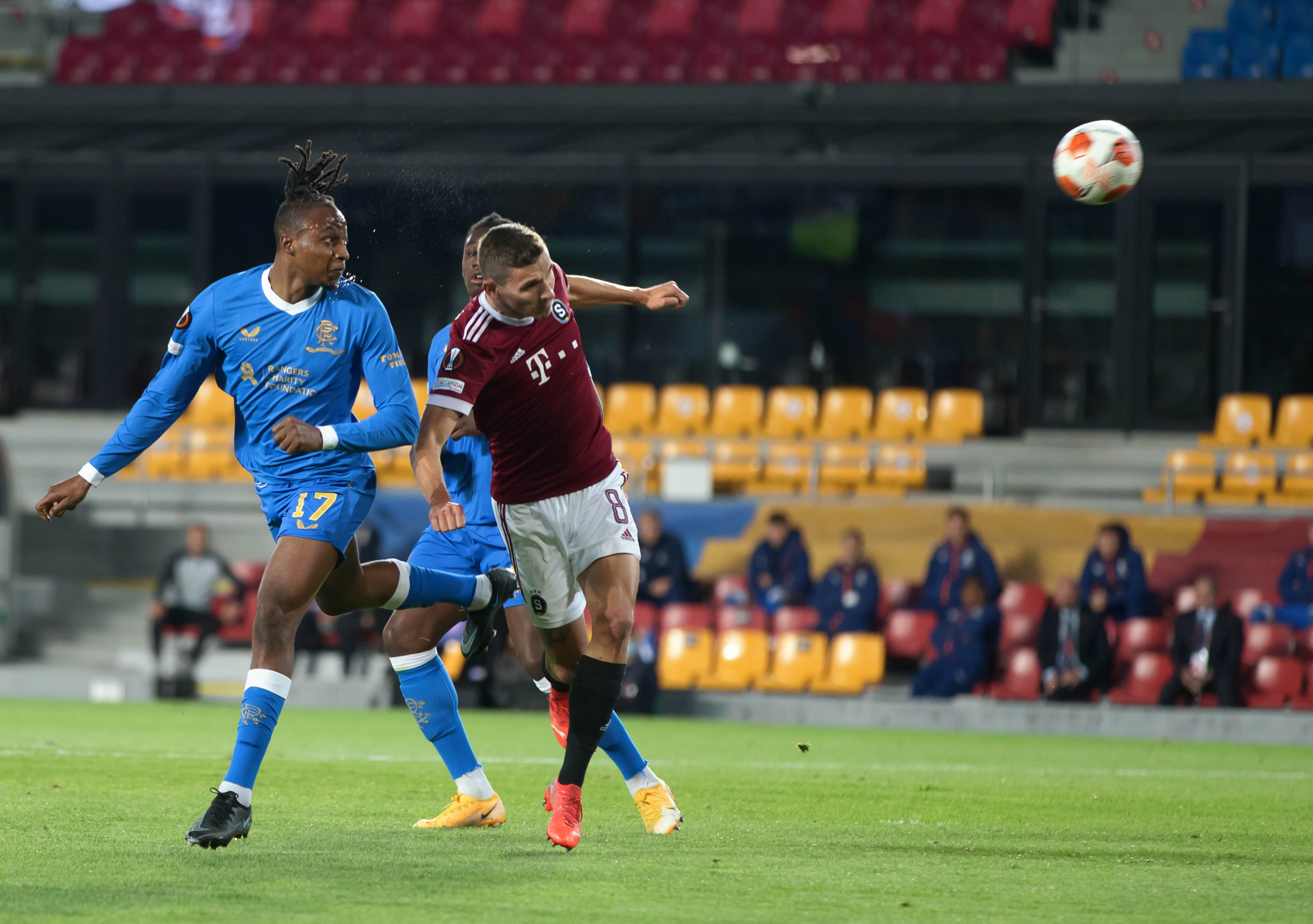 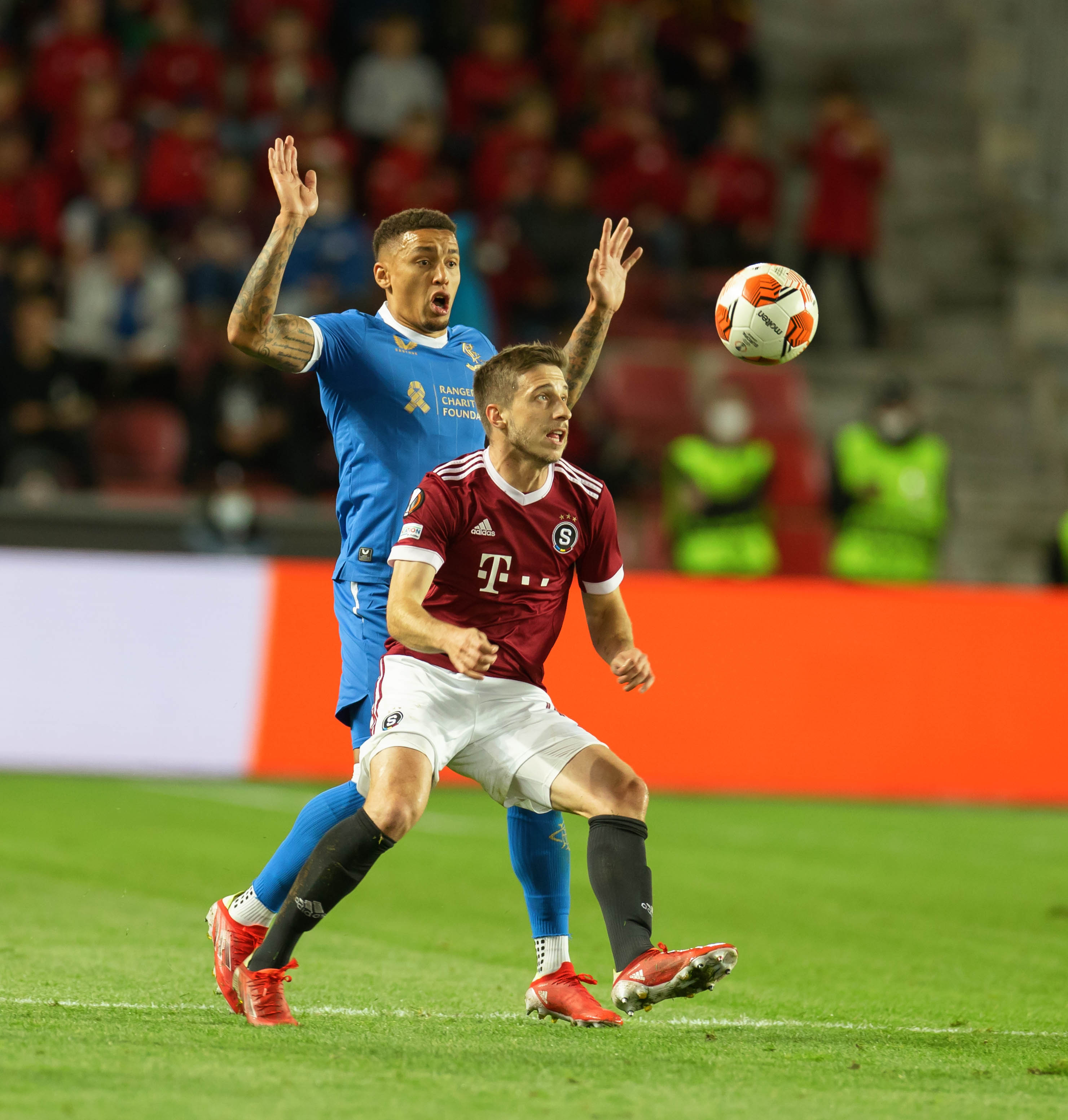