Five years ago, National Rugby League chief executive Dave Smith walked into the office of then Fairfax Media chief executive Greg Hywood at Pyrmont in inner Sydney to talk to him about the NRL broadcast rights.

The former Lloyds Bank chief had been convinced that live streaming of sport was the way of the future since Major League Baseball’s pioneering entry into over-the-top media and was in the midst of shopping around the rights to the 13-a-side game for the five seasons from 2018. 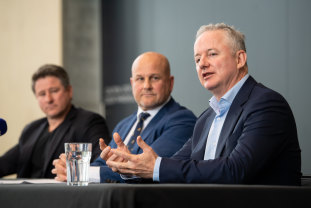 The Welshman departed the NRL in the midst of it all but, five years on, his vision for the future of sports rights in Australia may be starting to take shape with Nine and Stan Sport’s acquisition of rugby in a $38 million, three-year agreement unveiled this week.

Owned by Nine, now the publisher of this masthead, the new sport streaming arm of Stan also announced the acquisition of the rights to two tennis tournaments – Wimbledon and the French Open

Across the ditch this week, Amazon Prime also secured a foray into live sport on the subcontinent by paying for the rights to screen all New Zealand cricket in India for the next five years.

Smith is not attempting to appear ahead of the game – he’s speaking after being contacted by The Sydney Morning Herald and The Age – but believes the addition of another sports streamer in Australia alongside Foxtel’s Kayo is great news for sports who’ve been told by television executives that rights fees have hit their ceiling. 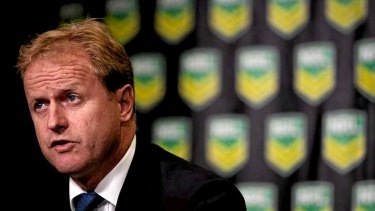 Dave Smith was big on streaming in his time in charge of the NRL.Credit:Edwina Pickles

“I honestly always thought that at some point they were going to be a major player in the market. Sports content is so valuable – it’s a marketplace that was bound to fill up,” he said.

“If I was a content owner I’d think it fabulous because, one, I can access a bigger audience; two, I’ve got more buyers of my content. I think there are lots of good reasons why there has been this massive technological shift and I think it’s good for the sports because it brings more competition into the system.”

With rugby as the pilot program, there will be interest in what Nine sets its sights on next for Stan Sport.

The rights to the A-League football are available from next year but as for the subscription market in Australia’s three major codes – NRL, AFL and cricket – Nine chief executive Hugh Marks has indicated Foxtel have too much skin in the game at the moment to be challenged. 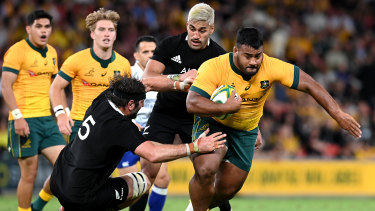 Rugby was the first sport picked up by Stan. Credit:Getty

Colin Smith, managing director of Global Media and Sports, describes Nine and Stan Sport’s rugby play as a “toe in the water” with a unique economic model in which they will try to generate advertising revenue from the game in front of the paywall and drive subscriptions behind it.

“Probably it’s their little toe because, with all due respect, if you think about rugby in this day and age, it’s not like rugby is a must-watch even in NSW and Queensland,” he said.

"But there is no question it’s an attention grabber.”

Whether or not it's the little or big toe, Stan's move into live sport has set a precedent for how Australia's major media companies will start thinking about future sports rights deals. Marks has repeatedly spoken about the need to own broadcast rights across all mediums and rugby is the first sport to allow this. This idea of "exclusivity" has finally become a reality.

Luke Bould, former chief commercial officer at Football Federal Australia and director at consultancy Alacria Global, said the ability to own all the content will be very valuable for both the sport and the media company.

"The success of this will be how they can make the two parties work together or how they can build those synergies between Nine and Stan," Bould says.

Stan Sport will be one of three local players able to provide viewers with live coverage of matches. Optus Sport, which launched in 2016, has the rights to the English Premier League, K-League and J.League while Kayo Sports, a streaming service owned by Foxtel, provides a variety of different matches at a cheaper price point to the traditional set-top box. The more services in the market, the more competition for the rights. But Bould says he does not expect rights to cost media companies any more than they do now.

"I'm not sure it's going to have a massive impact on rights fees," he says. "We've reached a point where everybody has a new discipline in what they pay for things.

"While it won't hurt the rights market to have a new client, it will probably stop some of the declining rights fees. I certainly don't believe it's going to lead to a new era of rights fee escalation."

What is more likely to occur is a move away from aggregation. Instead of the one-stop-shop for live sport – Foxtel – every organisation will be thinking about what is best value for money and this will change where viewers can access content. Inevitably this will increase competition tension for Foxtel, which uses live sport as a way to attract subscribers and has a large debt pile it needs to pay off.

"They're clearly going to lose that position [as an aggregator]. But ultimately they're a really sophisticated business and they've got an enormous amount of data, so they will have looked at the subscriber numbers, they will have done an evaluation on the likely losses of subscribers as a result of losing rugby and that will have driven their offer," Bould said.

"Whilst they do lose that positioning around all sport or at least all Australian sports … clearly that position only has benefit if it stacks up financially."